A129 Under Trees (With some big frame grabs)

It's been interesting to see how well the A129 does when moving quickly under trees where there is a huge amount of detail to squeeze into limited bitrate.

Running with a video bitrate of only 16.4 Mbps all dashcams will go blocky/pixelated unless you are moving very slowly, but some go more blocky than others and most loose a lot of the detail too.

These frame grabs are all from 16.4 Mbps video, and while there is a bit of blockyness in places as expected, the only camera I've seen do better on the details is the Gitup F1 4K camera running at 70 Mbps. The A129 seems to give more priority to detail rather than avoiding pixilation than other cameras I've used.

Note that they all have the speed in the bottom left, I wasn't going slowly...
And also, how it copes with bright sunshine and shadow detail in the same image...
This is with HDR turned off, mainly because it is not very good in my current beta firmware.

Lots of leaves, bright sky, and all the road still visible: 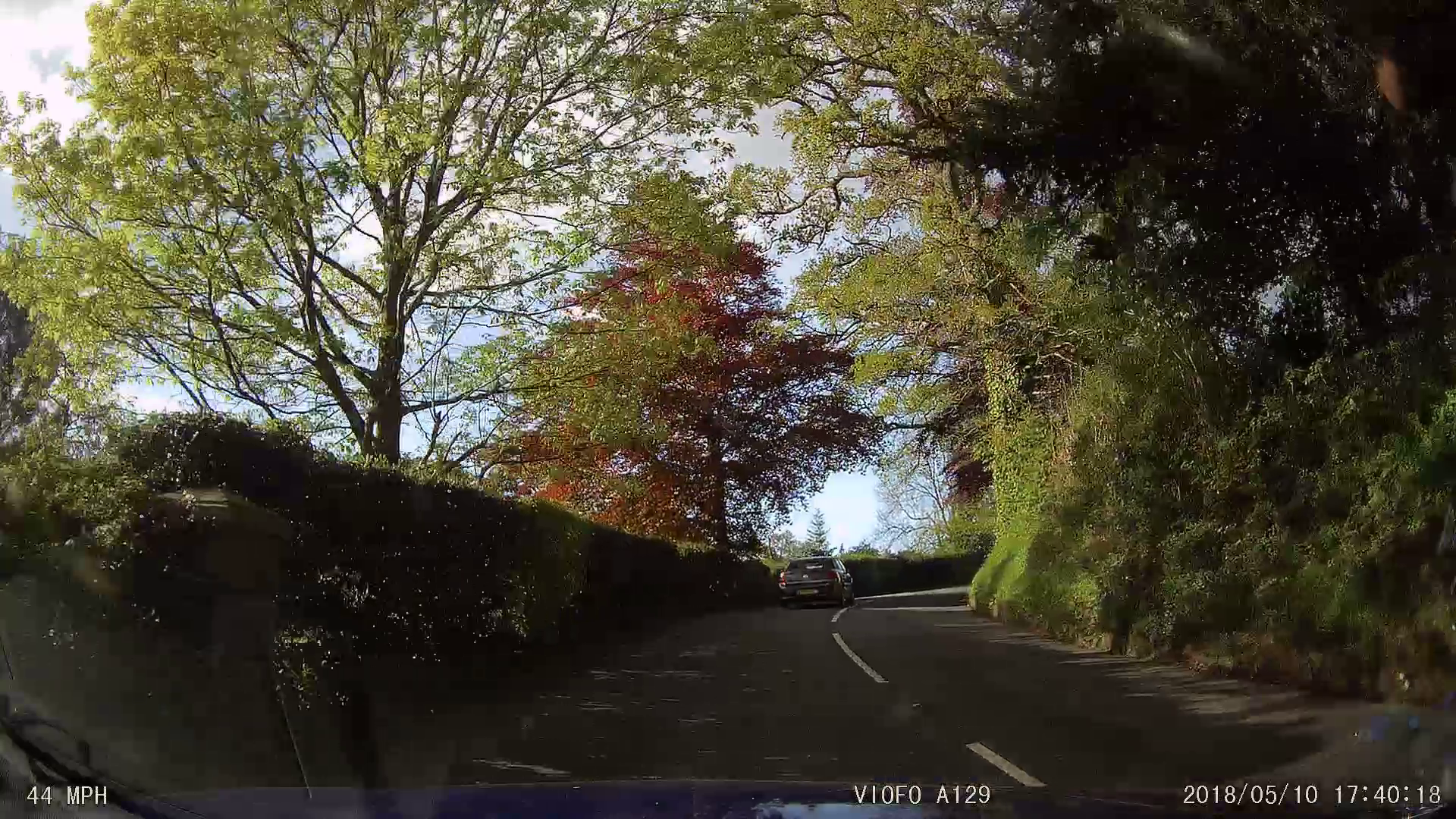 Dark sky, bright road! Sky is a bit pixelated and it's lost the road chippings in the mid range, but it is at 44 MPH (71 KPH) and it's captured every leaf on the tree: 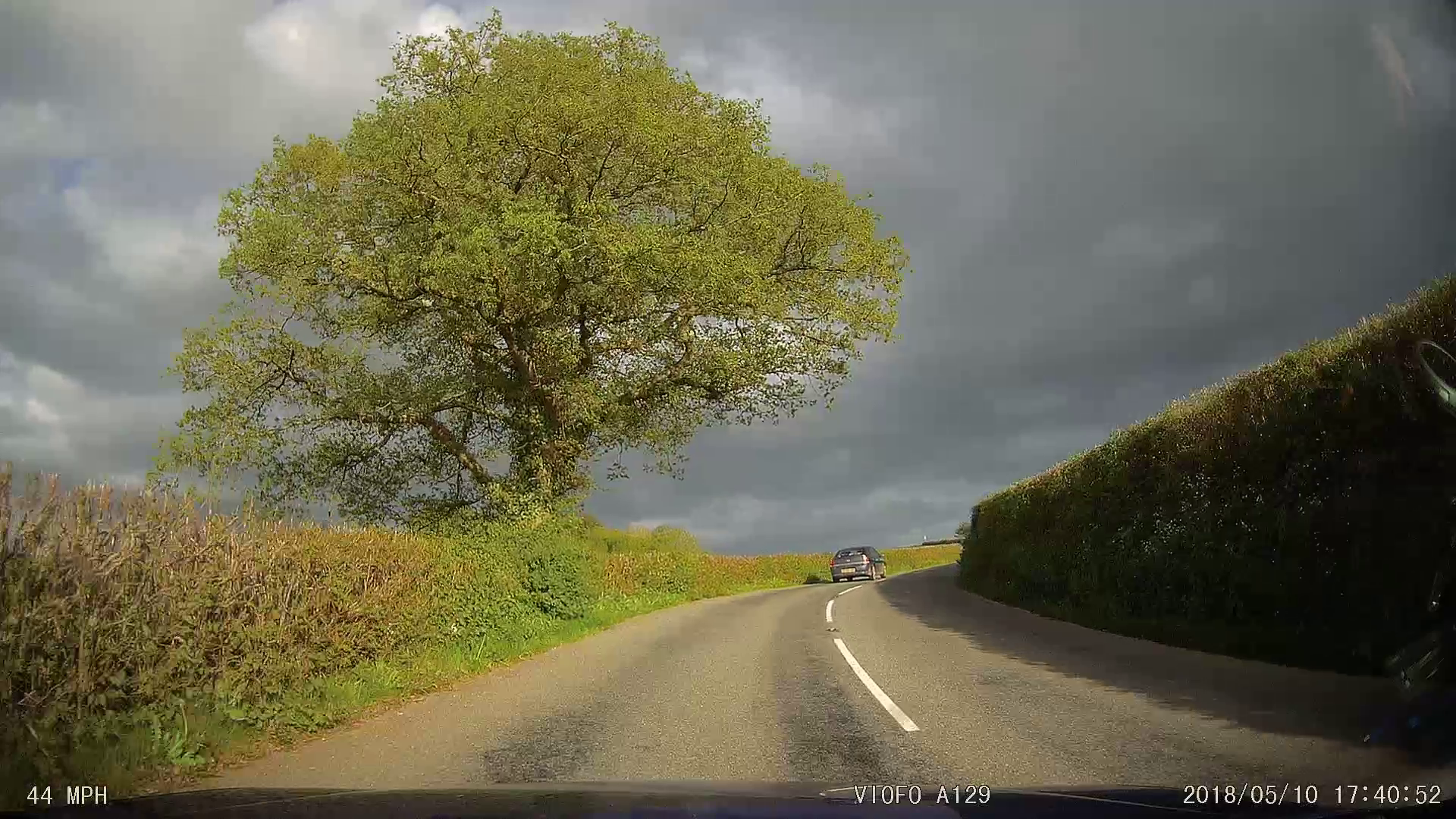 Over exposed the sky a little on this one: 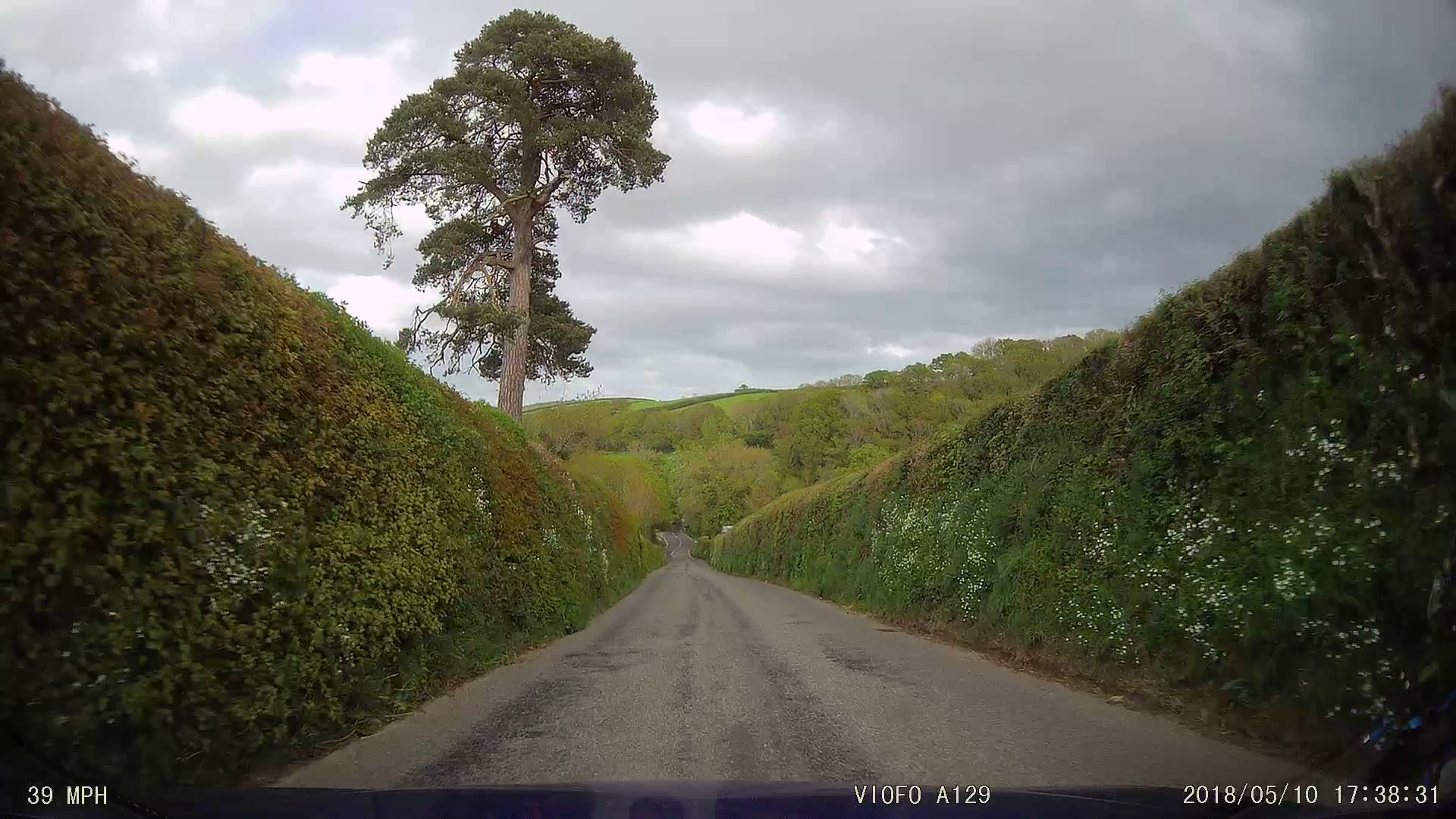 76 KPH and the cyclists are not blurred: 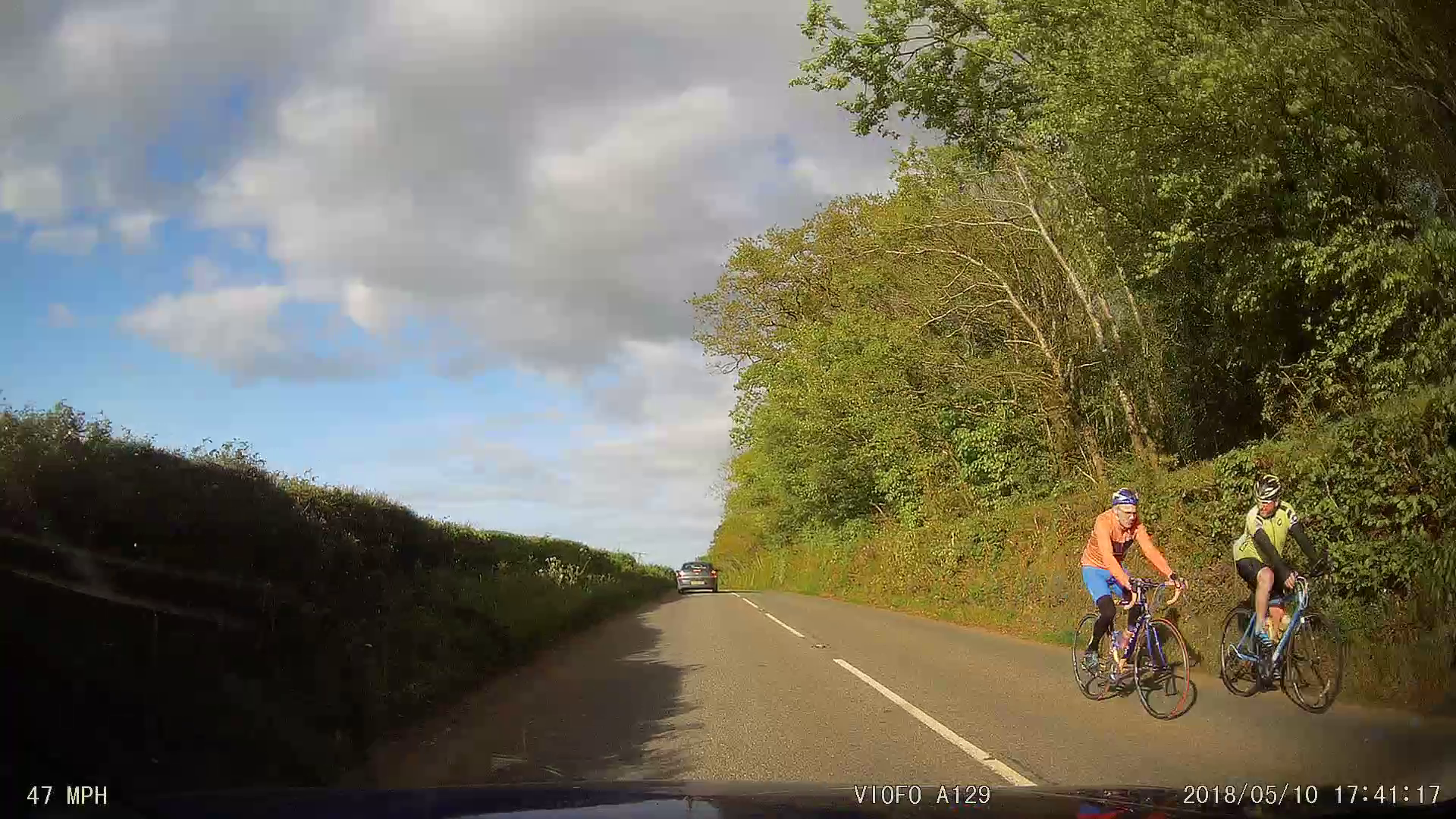 This is the same frame captured from my Blueskysea B1W: 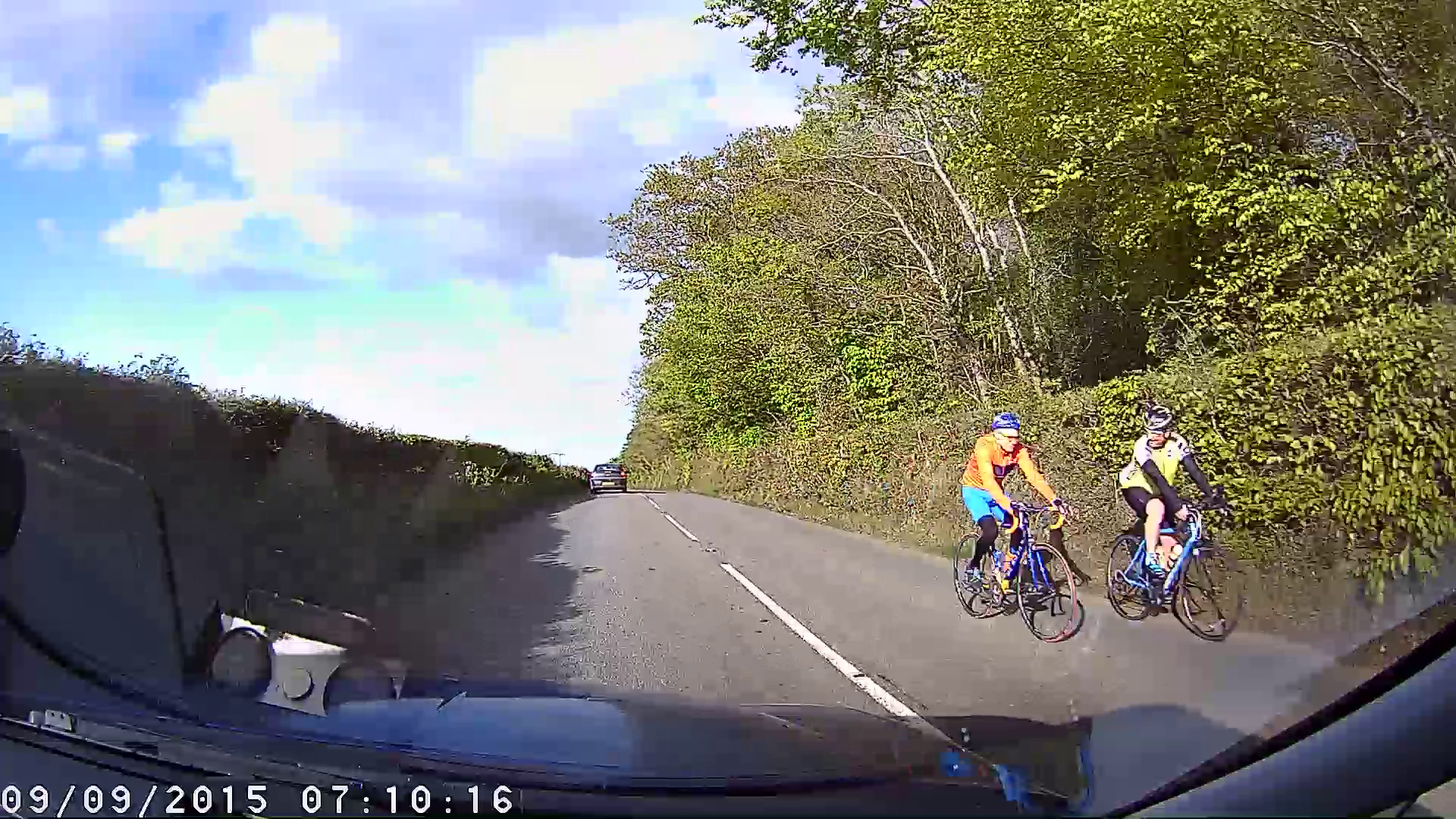 The B1W is the camera that always does best at capturing number plate detail, even beating the 4K Gitup F1 at times, despite it being the cheapest camera I have and having the lowest bitrate. It seems to prioritise number plates over everything else, so the images can be very pixelated but it still gets the number plates. The A129 is the first camera I've tried that can match the B1W for number plates, although like other Novatek processor based cameras it still doesn't do a great job of the sharpening. here are some comparisons in difficult conditions:

Plate in shadow with sunshine at 72 KPH, B1W first: 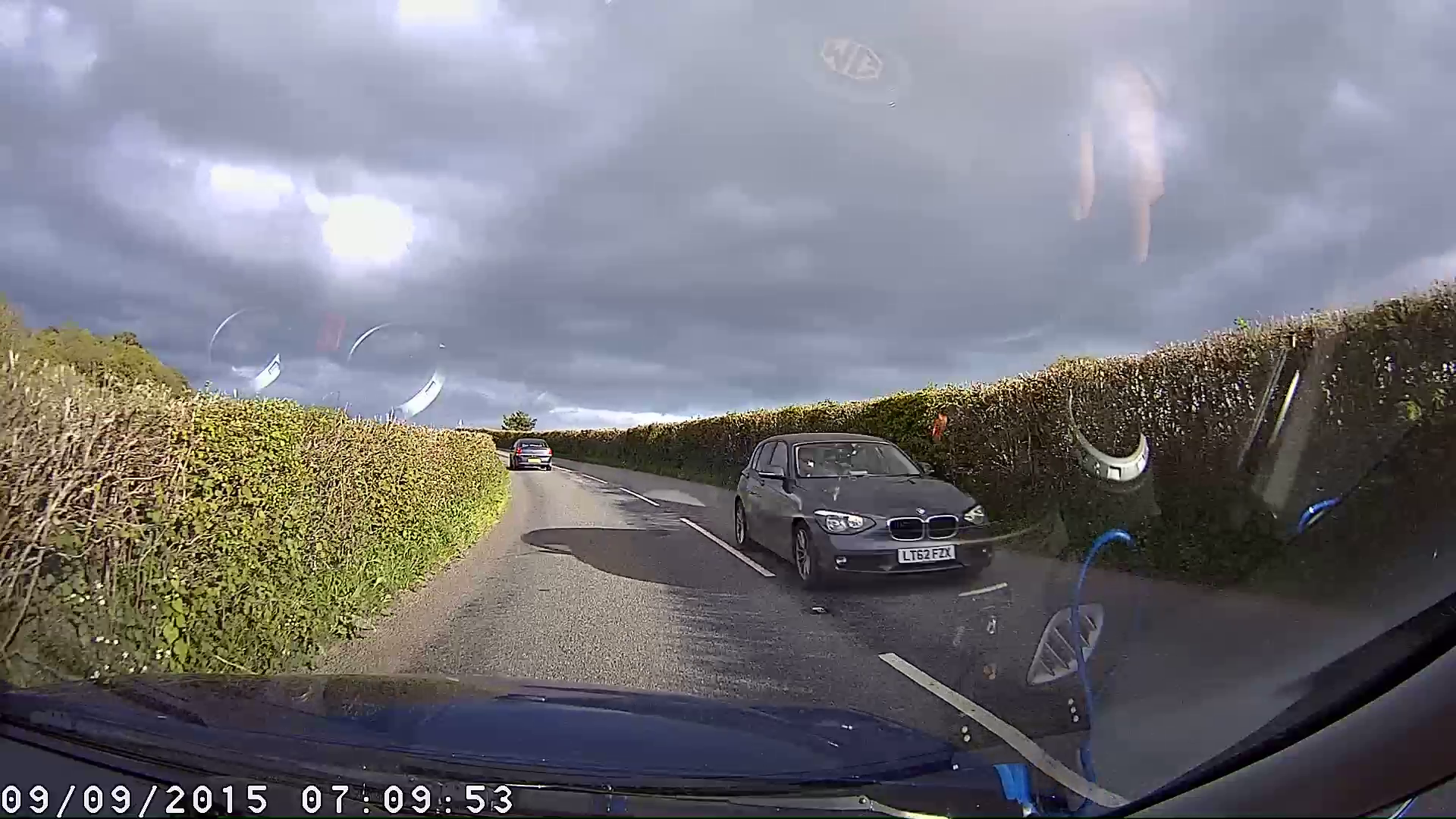 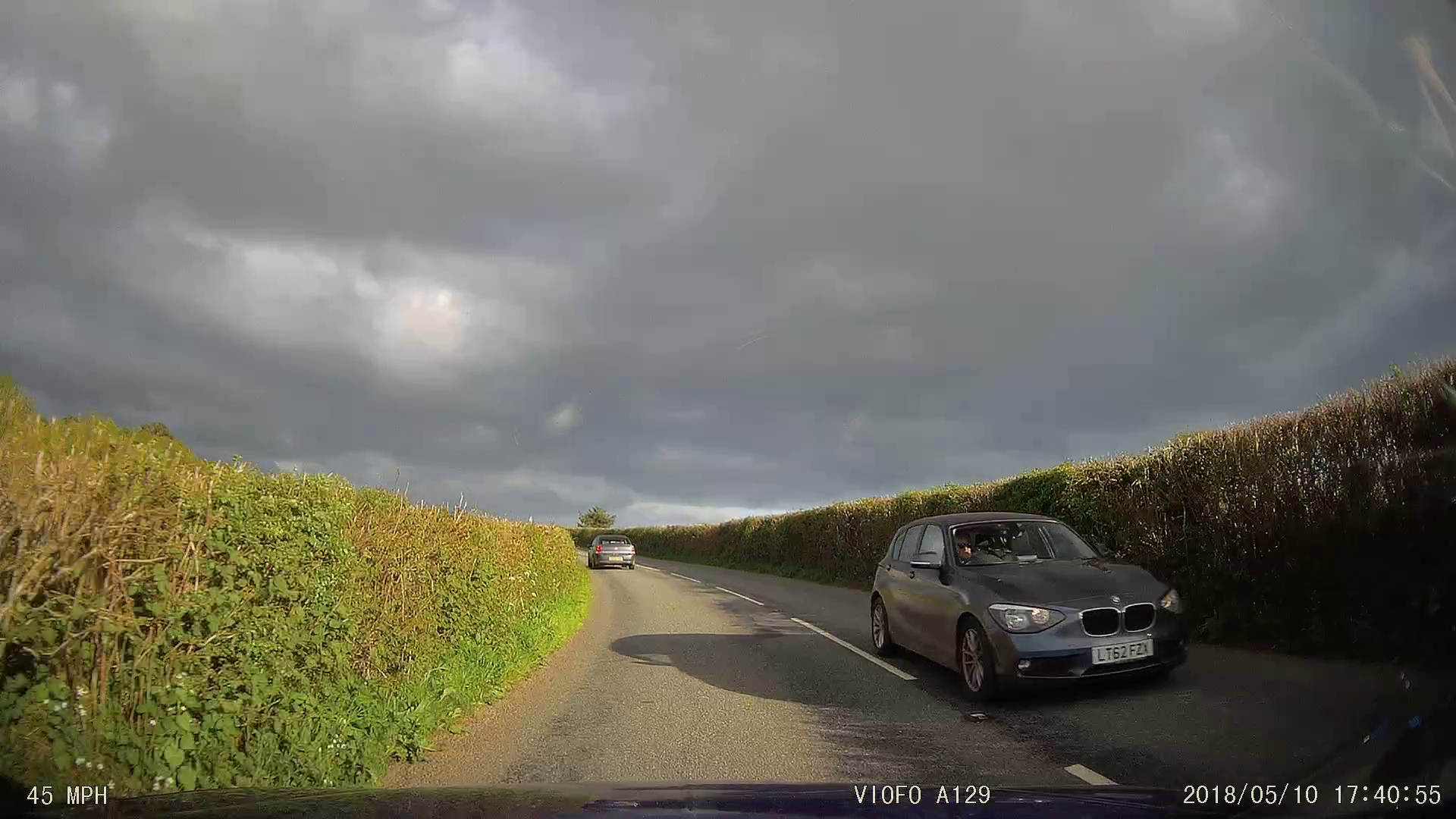 Everything in shadow at 74 KPH: 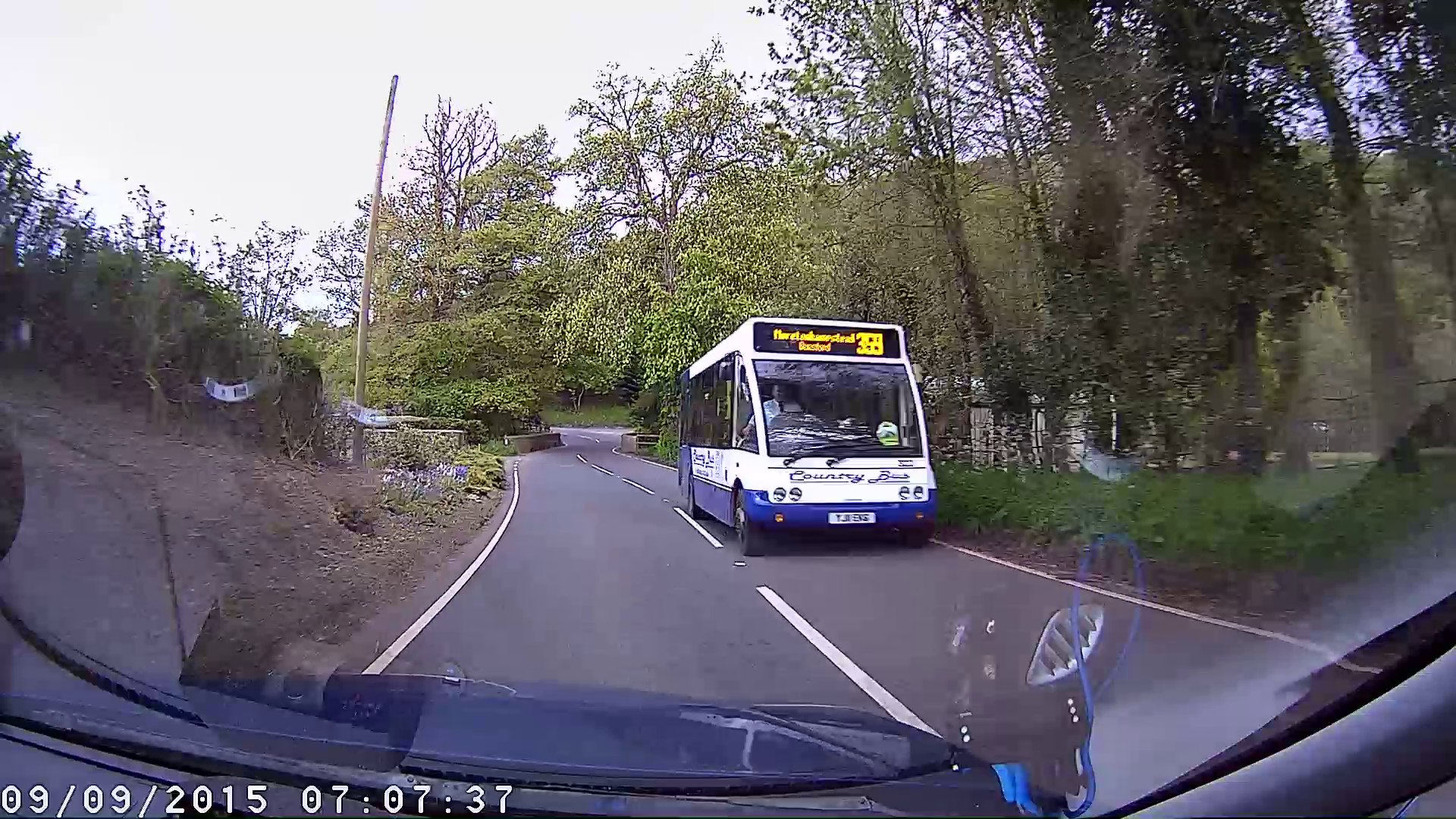 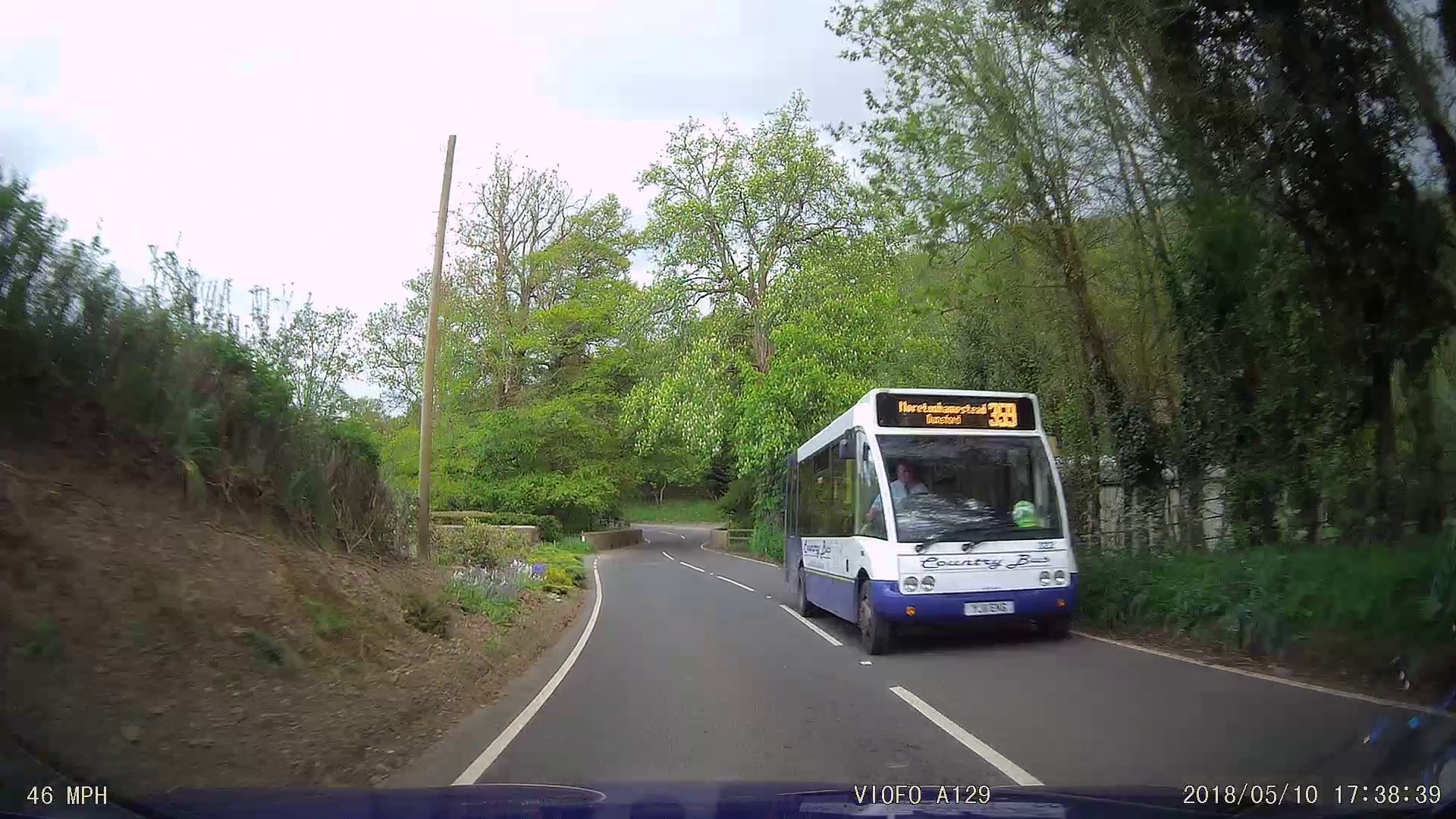 Everything in shadow, but only 8 KPH: 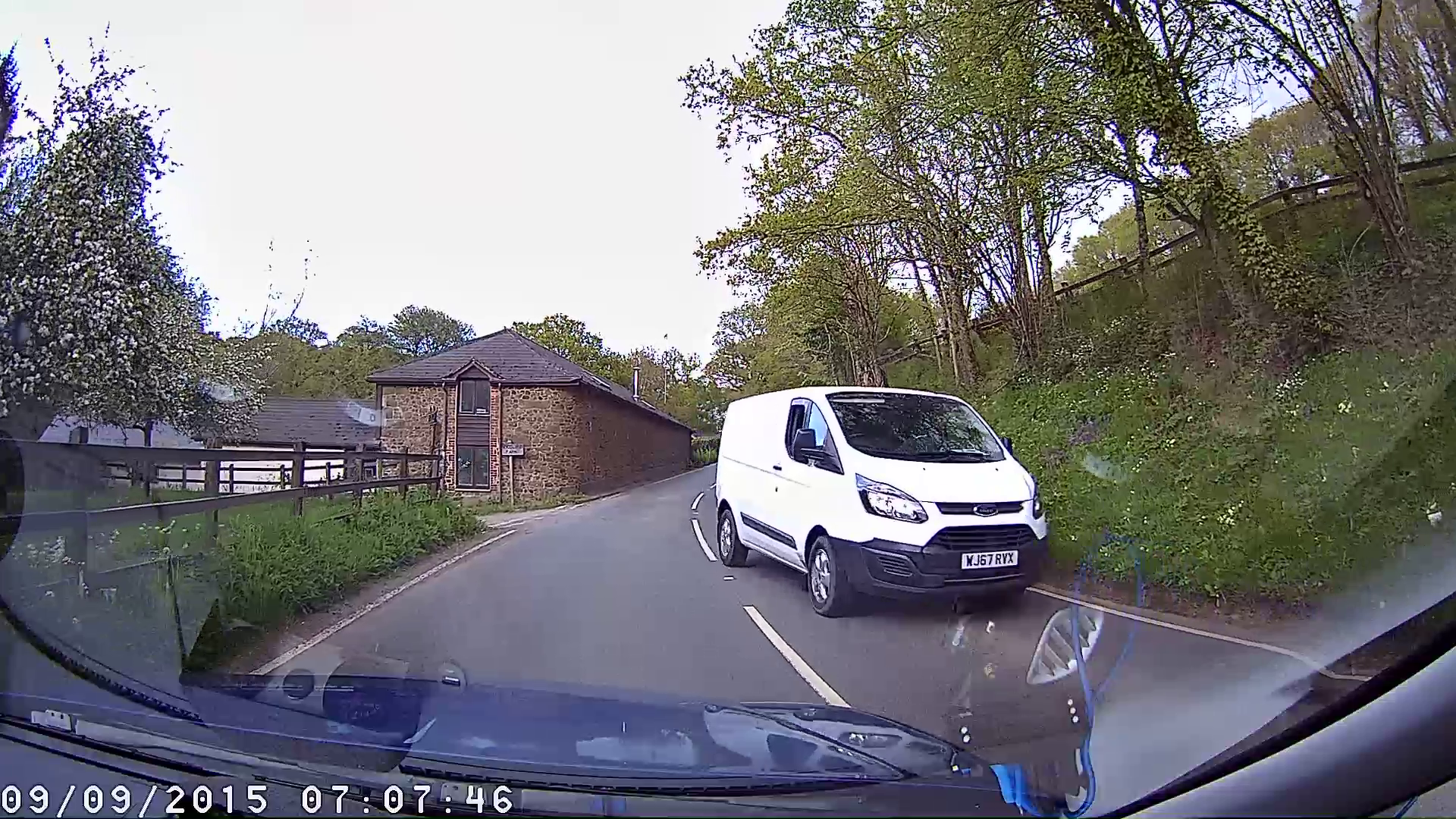 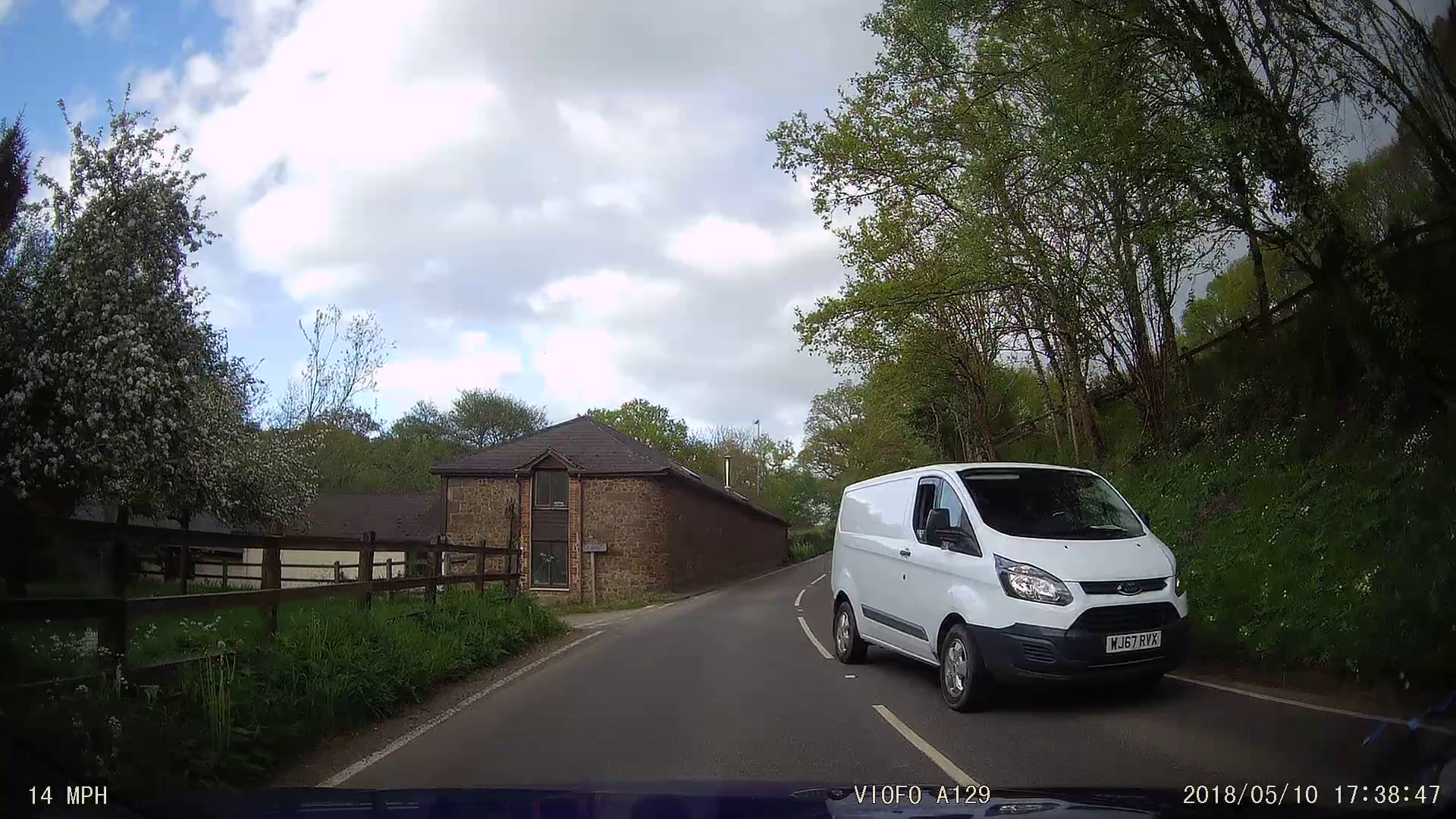 Video including the above frames and more to put them into context:
Obviously this will be affected by YouTube compression, so use the frame grabs above to judge image quality at 16.4 Mbps.

(First trip with new brakes fitted - they stopped faster than expected and the GPS can't keep up! It would be nice to have a dashcam with 10Hz GPS,
the Gitup G3 action camera can do it using the same processor so why not a dashcam?
Or at least it could make a guess at 10Hz by combining the GPS data with the accelerometer data from the G-Sensor.)

Also, the best dashcam audio I've encountered, with a great auto volume control, doesn't matter if your windows are open or closed, loud car or quiet car, it always does a good job and records plenty of detail, like when the ABS is working!

Wow, YouTube bitrate is way too low for that video!
(Unless it is just my slow connection?)

Nigel said:
Wow, YouTube bitrate is way too low for that video!
(Unless it is just my slow connection?)
Click to expand...

No, not you. It looks horrible. Looks like an 8 bit video.

Good review. I look forward to the release!

TCK81 said:
No, not you. It looks horrible. Looks like an 8 bit video.

Good review. I look forward to the release!
Click to expand...

The last 10 seconds is OK, where I am parked and it is just the birds and the cows moving - don't need much bitrate for that!

Interestingly, I tried compressing it with the Google/YouTube VP9 codec, and couldn't really get any additional compression without loosing some quality and causing pixilation. With other dashcams that record less detail I would expect to compress it down to 6 Mbps with VP9 or H265 before starting to loose quality. The A129's H264 compression is doing a really good job to keep all that detail.
OP

What actual setting that will be in the production release I have no idea, but 16Mbps is a good bitrate for recording dashcam video all day on a single memory card, if I'm making a movie while driving under trees then I want a bit more to get rid of the pixilation on the road and banding in the sky.

@Nigel, crazy question, but is there any proposed date of release for the A129 that you might know of ?

I'm shocked that just before the van pulled out there were no road markings saying "SLOW" in big letters on the tarmac, even though there was on the opposite side of the junction the van emerged from!

Lola said:
@Nigel, crazy question, but is there any proposed date of release for the A129 that you might know of ?
Click to expand...

Someone in another thread asked Viofo via chat this past Tuesday and was told by Viofo 2-3 weeks.
OP

DashcamDPR said:
I'm shocked that just before the van pulled out there were no road markings saying "SLOW" in big letters on the tarmac, even though there was on the opposite side of the junction the van emerged from!

The slow in the other direction is probably for the signposted junction just before the bridge.
I think the van was coming out of a farm entrance, although given that it does have double white give way markings it must be more significant than a standard farm entrance and really should have a warning signpost indicating a left turn before the corner.

I had seen that the van had waited for the previous car and assumed that it would also wait for me when I accelerated, but it didn't wait.
You must log in or register to reply here.
Share:
Facebook Reddit Pinterest Tumblr WhatsApp Email Link
Top