I'm happy to finally announce the release of AFT 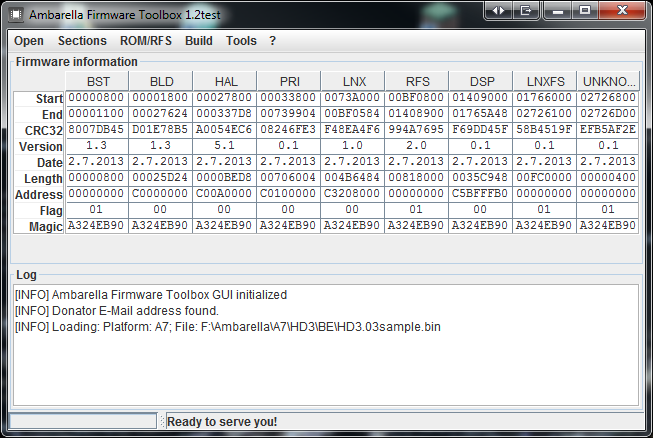 What is AFT?
AFT (Ambarella Firmware Toolbox) is an application for modifying Ambarella A2, A5 and A7 firmware binaries. This includes extracting all raw partitions, editing the filesystem and all used strings (for example for translating purposes) and modifying the bitrate table. More features are always on my todo-list. It's based on my knowledge of A2RomKitchen but has been rewritten from scratch!

v0.7.5:
- Added a new row to Strings editor which helps with changing predefine setting values
- Fixed a Bugg in the RFS Compiler (removed static objects which stored rfs data multiple times after multiple executions
- Some other changes for the not yet released MenuEditor
- You are now able to delete files from RFS section. If you delete them they'll be recreated without content at compile time and therefore "pseudo"-removed from the filesystem.
v0.7.4:
- added Export/Import of main firmware header to add compatibility to more A7 devices (thanks to @Se7ven )
v0.7.3:
- Bitrate Editor Improvements:
-- Now all 158 arrays are loaded
-- Descriptions updated (Thanks to @Falsificator )
v0.7.2:
- Bitrate Editor improvements
-> Shortcuts:
--> CTRL + C Copies the selected cell
--> CRTL + V pastes the Content in the selected cell
--> QuickPaste mode: Press CTRL + F6 to paste the Content from the cell above the selected cell into the selected cell and jump down 1 row
- Added an auto update checker
- Added an update downloader
v0.7:
- Added A7 Bitrate Editor (Tools > Bitrate Editor)
- Fixed some bugs
v0.6:
- Added automatic decompressing/compressing of A2 compressed sections (PRI and DSP)
- Added A2 Patches Support
- Improved operability (to prevent more user Errors)
- Added more error-catching
- Fixed some GUI bugs
- Other internal changes
v0.5.1:
- Fixed an issue in A2 Header creation algorithm
v0.5:
- Initial A7Tool release with A2 and A7 support
Requirements:
- JRE or JDK 1.8 or greater (http://java.com/download)
- Windows administrative permissions (not sure about this one)
- Firmware binaries (http://dc.p-mc.eu/)

Private useage only!
Any commercial use and any use that is not educational nor private is prohibited!

Validation of firmwares:
You don't trust me/my tool?
There is an easy way to validate generated firmware: Decompile the modified firmware again with AFT, if everything seems alright it should be fine!

Disclaimer:
I am not responsible for any bricked devices, dead SD Cards or anything else that might happen as a result of flashing firmwares you modified with this tool to your dashcam.

Support me
If you want to support me and have some money left: Donate with PayPal. You'll receive a "donator-status" in AFT which does not have any benefits, yet.
You can also help me by hunting bugs and reporting them
Last edited: Aug 8, 2018

Tobi@s said:
Protip:
Always have a USB -> mini USB cable with PIN 4 and 5 linked ("burning cable") to recover your camera in case of a brick
Click to expand...

Oh I'm going to add that it's only required for those devices, thanks
OP
OP

I just reccognized that A2 compiled firmwares with modified rfs seems to have a Problem . will check that tomorrow......
OP
OP

Hi Tobi@s, thanks for your app and help, I want edit the sounds but i don't know where are the sound and how replace.

I try to replace the AAC and AC3 files but after install the firmware on the camera have the old sounds.

I guess the .pcm files are the soundfiles you are looking for. .pcm is a raw Format - I believe I read something that they are wave files.

Okay, I see what this files are of the sounds, the problem is what I can't convert to other format with any converter or play, maybe are bad uncompiled these files or have an private codec. I go to try making new .pcm sound for test.

Thanks you, regards.
OP
OP

I think @MadJawa wrote once that he was able to edit them with Audacity. Not sure,

Tobi@s said:
I think @MadJawa wrote once that he was able to edit them with Audacity. Not sure,
Click to expand...

I create new versions, I use Adobe Audition for modify the sounds, thanks for the help.

Hello mate, I thought I would give this a go with the backup file you explained how to grab via the autoexec.ash and I am getting the following error:

There are lots of strings in there - interestingly some of the code in the SDK says it only supports ar0330, imx122_s3d, and ov2710_s3d sensors - but I guess this is maybe because it's generic. There are lots of references in the binary to the ov4689.
OP
OP

The error occures because the header of the backup binary does not look like how it should. Strange. Do you have a original firmware binary as reference for me?

we could assemble one probably...
You have to run that firmfl comand for every single Partition - then we can create a flashable binary.
autoexec.ash Content:

reverend said:
Unfortunately I've not seen any firmware files for this camera as of yet - hoping that one will be released soon for this one
Click to expand...

the manufacturer changed solution providers recently, I don't know who they work with now though and what their after sales is like so will be interesting to see how long before some updates happen and how well they can get it sorted

Just bought you a beer too
OP
OP

Just looked at the partition files.. DSP HAL BLD and BST look ok. But PRI seems a bit large and RFS just contains 4KB of nothing.
We could do a work-around for the rfs but we Need to check pri before.

Anything I can do from this end?
OP
OP

Yes, only you can do it I don't own a G90 ^^
you Need to find a way to cd to romfs drive (maybe the letter is not z
Maybe with the command "mounts" or "drives"
You must log in or register to reply here.
Share:
Facebook Reddit Pinterest Tumblr WhatsApp Email Share Link
Top