Clock reset. What powers it?

After sitting over a week, (very cold, then rain) I finally took my bike out, and when I checked the video, I found that the date has reset to Jan 1, 2014.
Does the C3 contain a separate battery to maintain the time and date, or does it depend on the main battery )or capacitors)?

If the clock is maintained by the charge on the caps, then it will be a problem, since they will eventually discharge due to internal leakage.

Relies on the battery or caps to maintain this, doesn't have an RTC battery
OP
K

jokiin said:
Relies on the battery or caps to maintain this, doesn't have an RTC battery
Click to expand...

Hmm. not good for motorcycle use, where it may not be used for weeks at a time.
There's definitely room inside for a 3V lithium coin cell to keep the RTC alive. (1.5 to 3.6V per the data sheet.

Are you using the battery or cap version now
OP
K

jokiin said:
Are you using the battery or cap version now
Click to expand...

Cap version. Lost the clock after about a week of not using it. I figure the caps discharged over that time.

Would this work: Connect a CR2032 or similar coin cell across the battery / cap leads via a series diode and a large value resistor.
The resistor value should be low enough to keep the caps charged and the RTC running (3.5 to 3.6V if the battery connector is tied to the RTC power input)
The resistor value should also be high enough to prevent the camera from trying to run off the backup battery if the user presses the power button. (It would start for a few seconds until the caps discharge)
I presume very little current is required for the RTC, but the data sheet doesn't specify how much it needs.

Problem is, the location I have it installed (waterproof compartment in fairing) is close to the exhaust system, and gets very hot in summer. (I measured it recently, and it peaks at up to 20 degrees f over ambient temp.) I suspect this would cause issues for the lithium polymer battery, as these are somewhat heat sensitive.

If I used the battery version, I'd have to figure out a way to add ventilation to the compartment.

your best bet is to tap directly to motor cycles battery and use the power switch on C3 to start and Stop..
but it may drain your battery if you forgot to turn it off.

If C3 wires to motorcycle battery, you do not need to power on and power off when driving.
Seems like you already did, or not?
OP
K

I did some testing with a 1F cap I lay lying around, and a CR2032 battery. The battery will source enough current to slowly charge the cap to 3.0V, but not enough to actually run the C3 if an attempt is macde to power it up. (C3 will attempt to power on with a full 4.7V charge on it's caps, but not when they have only 3V.)

So, the plan is simple: Prepare a tabbed CR3032 battery, with a series schottky diode to prevent current backflow into the battery, and connect it to the C3 cap leads at the connector end.
This will keep the caps from falling below 2.4V until the battery runs down. I''ll cover it with shrink tubing, secure it with a bit of double sided tape against the case and a small foam block between the battery and PCB to keep it in place. I'd use a slide-in holder for the battery, but I can't find one that's thin enough to fit.

Hopefully, the combined load of the RTC and supercap leakage won't drain the CR2032 too quickly. At least, it should last much longer than the caps alone.


(I'll also add a pair of test points so I can keep an eye on the battery voltage without taking it all apart.)

(It's powered off an ignition-switched USB port on the bike. I do not want to have to turn the camera on and off manually. The whole reason for using the camera is to serve as a dash cam, with no interaction other then collecting the video files if something happens worth saving.)

I can't see your battery lasting for long.

How about adding another much bigger capacitor outside the camera since you have it in an enclosed space?
OP
K

Running an experiment now. Connected an old (2.952V) battery to the cap set via a diode, so the battery will not come into play until the cap voltage drops far enough.
Started camera, then unplugged it. Cap voltage was 2.233V after it shut down.
It took 13 hours until the cap voltage fell enough to forward bias the diode and start loading the battery.
About 24 hours from shutdown, the cap voltage is holding at about 2.52V, but the battery is dischanrging about .001V per hour. (It is a very old battery, need to try a fresh one)
(A better idea may be to use a diode with a larger drop, or a zener to allow the caps to drop to a lower voltage before loading the battery.)

Ideally, this thing needs a dedicated RTC battery connected directly to the NT95560's RTC pin. Perhaps it could be routed to a 3rd pin on the battery header. If you have battery version, the battery cable would also jumper battery+ to the 3rd pin to power the RTC from the main battery pack. If cap version, then the 3rd pin would connect to the 3V lithium RTC battery, to power the RTC without any other loads.
Use a common insulated CMOS battery assembly like this:
https://www.ebay.com/itm/220865295860No need for a holder this way, Just wedge it in place with a bit of foam.
Last edited: Jan 20, 2015

I just completed a 2 week test of CR2032 battery connected to the caps via a 1N914 diode and A 10K resistor. Over that period, the battery voltage dropped from 3.063 to 3.02. (.043)
Assuming this discharge rate continues, it will take about 46 weeks to drop 1 volt if the bike is unused.
When powered, the cam voltage is higher than 3V, so the battery will not be under load, so it will actually last longer.
I'll check it each month to see how it's holding up.

I found a thin holder for the battery, Covered with a single layer of insulating tape, it fits nicely between the SD card and case.
Some photos:

Holder, with the 10K SMD resistor I salvaged from an old PCB. 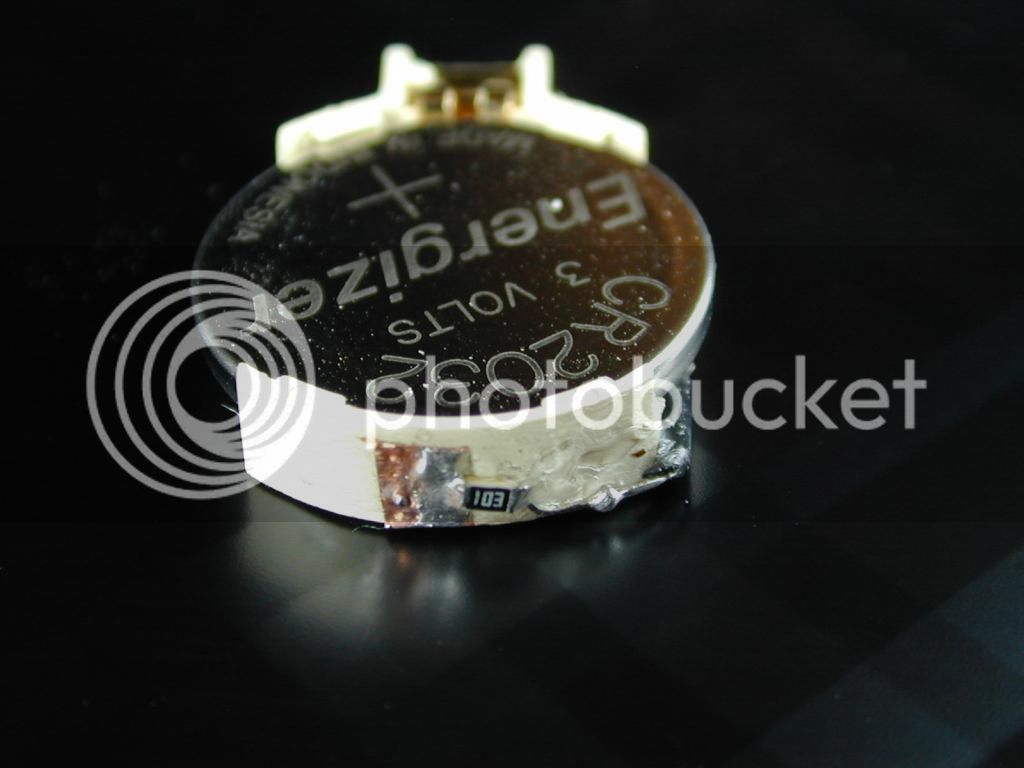 Other end, with the diode. 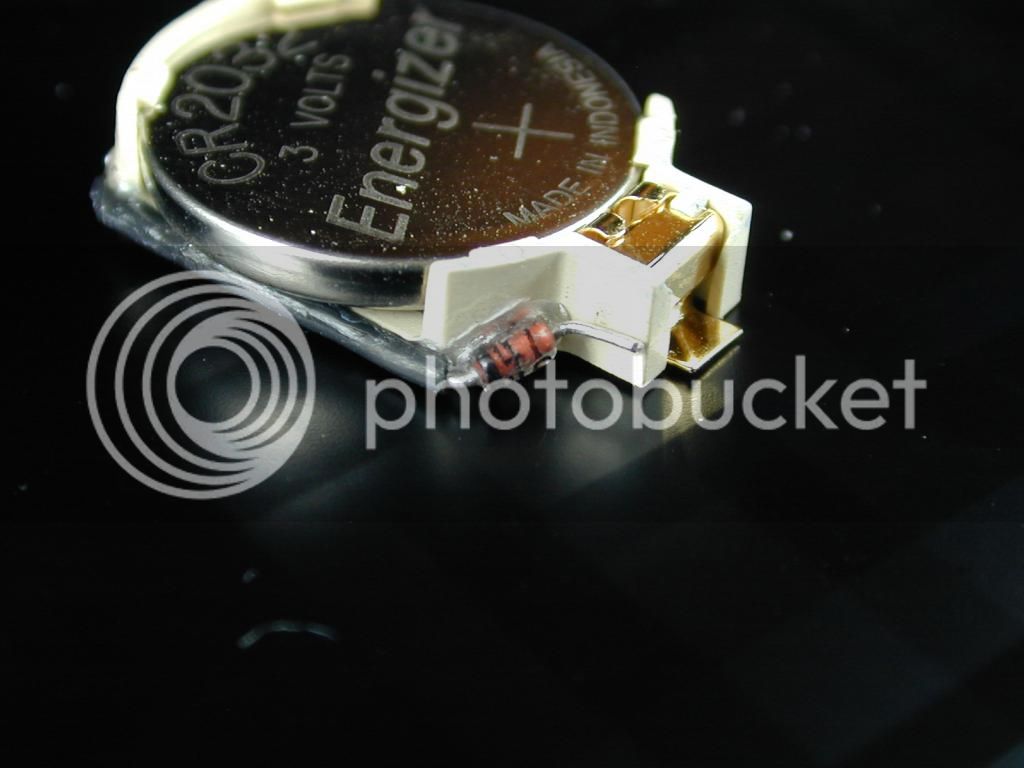 Connected, with a strain relief formed with Suguru.. I wrap a loop of gaffer's tape around ithe whole thing to avoid shorts and make it fit a bit more snugly. 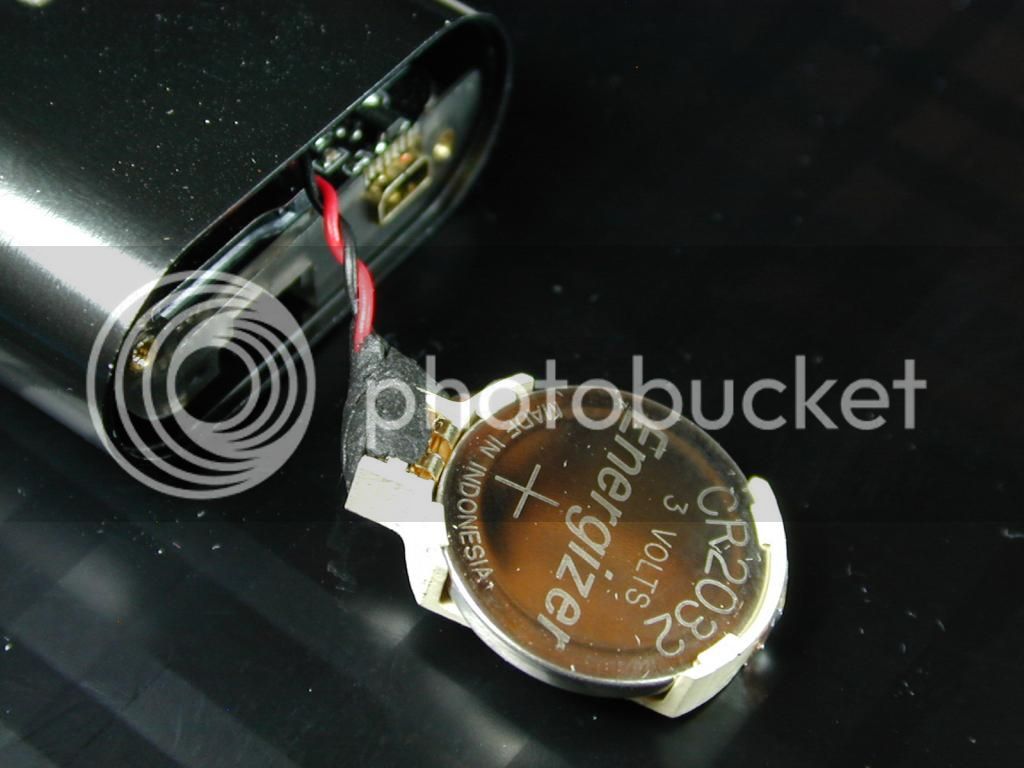 To change the battery, I have to:
1. Remove end plate
2. Pull battery holder out.
3. Remove insulating tape.
4. Replace battery.
.. Replace tape, stuff it back in, replace plate.
I expect I'll have to do this only once a year.
Last edited: Feb 14, 2015

what is the temp rating of the battery? will it suffer like lipo in hot days?
OP
K

cf7 said:
what is the temp rating of the battery? will it suffer like lipo in hot days?
Click to expand...

http://data.energizer.com/PDFs/cr2032.pdf
-3C to 60C, similar, but it won't have the LiPo high temp charging issues. Also, in this application, at 3V on the battery, it maintains about 2.3V across the caps, and draws 20-30 microamps, so it should last some time. As the voltage drops, the leakage current should drop as well.

I plan to monitor temps in the recorder compartment during the summer, as well as the battery voltage to see how it holds up.
So far, it works. It would be much better if the battery could be connected to the isolated RTC power input on the NT96650, but I assume it's probably tied directly to the power button controller battery input on an adjacent pad, so there's probably no way to isolate it without PCB artwork changes.

This setup has a higher draw, but it should be tolerable.. I suppose I could also replace the caps with higher grade, lower leakage ones as well.

You can use BR2032 for low leakage but capacity is smaller than CR2032.
I don't have capacitor c3...
so how does the capacitor look like..are they square? how much F?
OP
K

cf7 said:
You can use BR2032 for low leakage but capacity is smaller than CR2032.
I don't have capacitor c3...
so how does the capacitor look like..are they square? how much F?
Click to expand...

cf7 said:
You can use BR2032 for low leakage but capacity is smaller than CR2032.
I don't have capacitor c3...
so how does the capacitor look like..are they square? how much F?
Click to expand...

Two 2.4 farad caps in series. (I think they were rated at 2. x? volts (The pair charges up to around 4.1V when powered.) I don't want to disassemble it all again just to check.
They are cylindrical, about 3/4" long You can figure the size of them relative to the case dimensions in the photo below.

Also, the current draw (calculated form the voltage across the resistor) is around 21 μA, so the CR2032 should last quite a while. I assume the cap leakage will drop as the voltage across them decreases. At a battery voltage of 3.02, the cap voltage was 2.384. The RTC input can go as low as 1.5V. I'm guessing it's connected directly to the + terminal of the caps.

I bought a wind up flashlight. You crank the handle and this recharges the internal battery. the only problem is you can exceed the voltage by fast cranking. inside it had the same cr2032 battery in a rechargeable version. If you could modify your circuit to include a regulated solar cell and a rechargeable button battery or use a hand crank generator once every few days maybe that would solve your problem?