Dash Cam isn't so big, but mount is? Attach to mirror?

I got the 3rd version from the seller on eBay that this site had a link to. A bit more money but I am used to eBay.
It does not have the macro switch at the top, but otherwise seems to be the real version. Daytime video is great, night time not so much, but I haven't taken much then or fiddled with the EV setting etc.

The camera doesn't seem that big but the mount is. I had hoped to hide the whole thing behind the mirror, but it sticks out passed the mirror.
I measured it , forgot already , it is at least 9" from the glass at the bottom! It is even worse if I put it on the driver's side of the mirror. 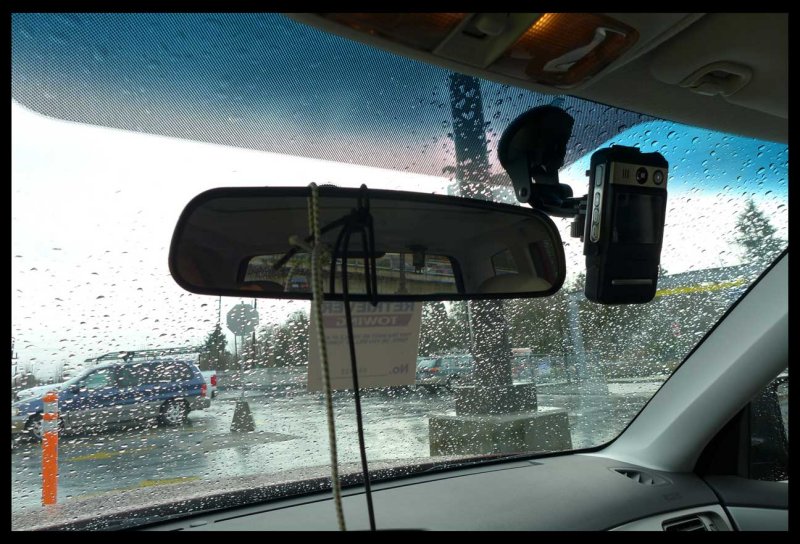 Putting down below in a corner isn't bad, I may go with that method: 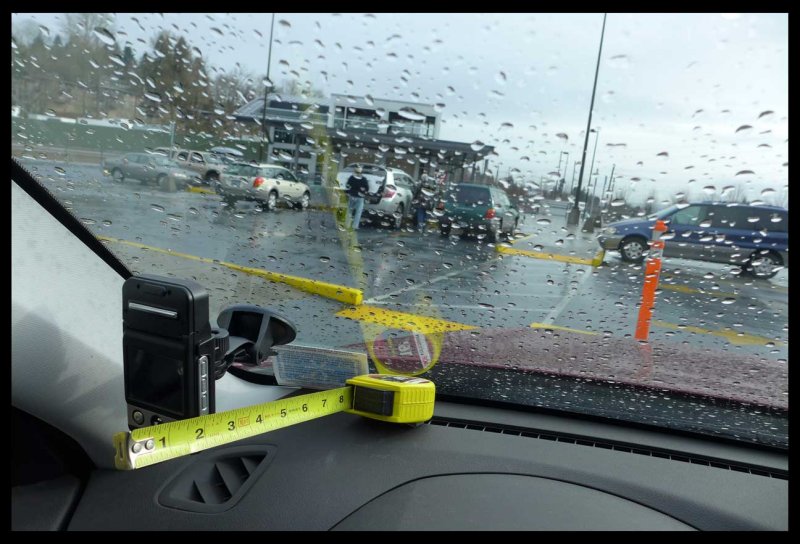 I would probably just remove the whole mount rather then have it attract thieves to my car.
Now that I played with it for a bit it does not seem to bad, it does release right away, but I finally figured how to clamp on.
I suppose it might wear out the suction cup to keep attaching it?

My other option would be to just put it onto the mirror: 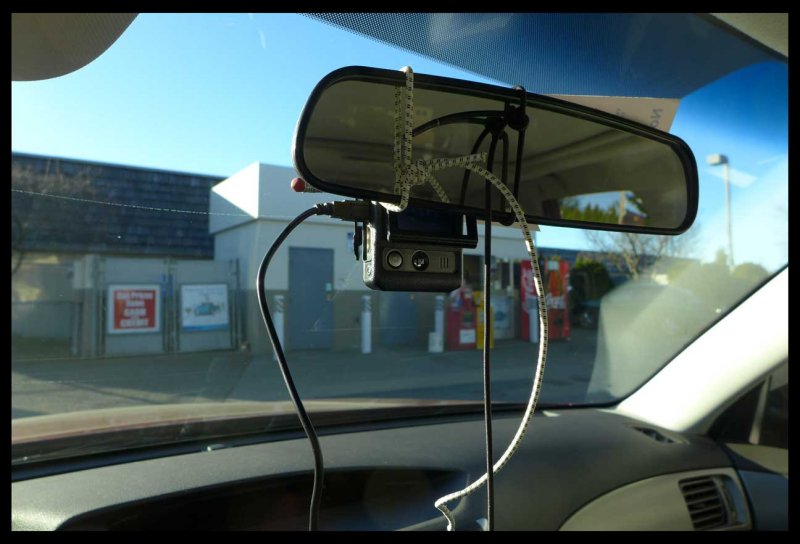 So far I have used the belt clip, a pencil, and bungies (I would clean these up if I go with this) 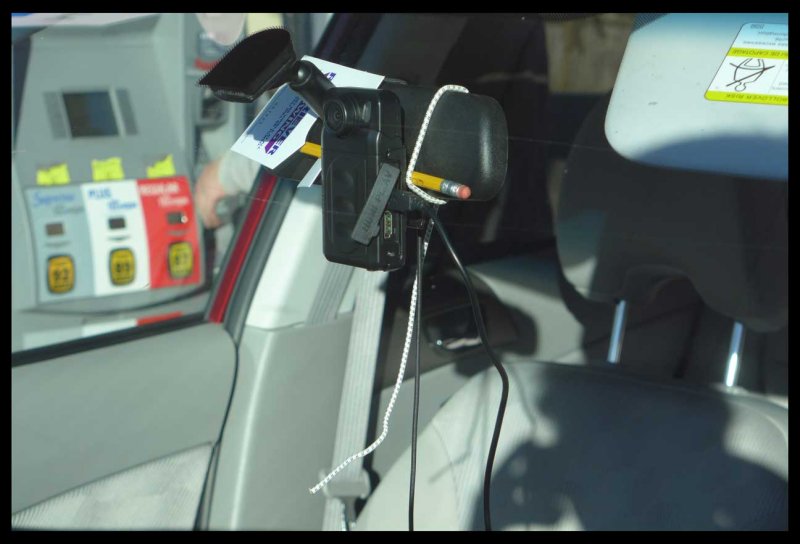 Might be unnoticeable enough to just leave there, with black bungees. Certainly ok to leave bungees there.

Need to start car before mounting to see if recording has started, enough of the screen hangs down to see if it is lined up, which it is on my mirror.

You had good ideas. The most discrete solution until now is behind the rearview mirror but to use some double sided tape. But you will need more work to center it and after mounting it the mirror must remain in that position precisely.

I was thinking for a moment to the first picture position but to rotate the mount 90 degrees so the camera will go out on the right of the mirror black dots area just with the lens. But you have there some blue tint color.
I am not good at english so I want to say to have the mount arm as horizontal not vertical like is now. The camera of course must stay in vertical position.

You can look at my signature for some mounts even yours is much different because of the suction cup. But after finding the final position we are waiting you posting in that thread your final setup.

If I go with this, I think I will epoxy something solid to the back of the mirror to clamp onto. I think it will work easier that way.
Besides how noticeable it is the issue becomes if one wants the buttons or power cord on which side. One might want to paint the button black so as not to be so noticeable.

Mtz,
The camera is fairly wide angle. So I don't think the mounting and mirror position needs to be that exact. Though I did get some bad pictures today, of the dark area and/or mirror mount trying this today.

I don't drive that much except when going skiing etc., and my garage is in a dark basement of an apartment building so I don't try mounting this that often.
I am thinking I will end up using whatever mounts and dismounts the easiest, I can hide it that way. If the works with the mirror that would be great so that for quick stops it would be more hiddened. I think a sun shade might hide it really well but using that would take about the same time as removing it? My other idea would be to make a large black hang tag, that would go up to the top of the window and down below the mirror, maybe say something so it doesn't look like it is just there to hide this?

Here is a picture of it flipped so it can extend above the mirror: 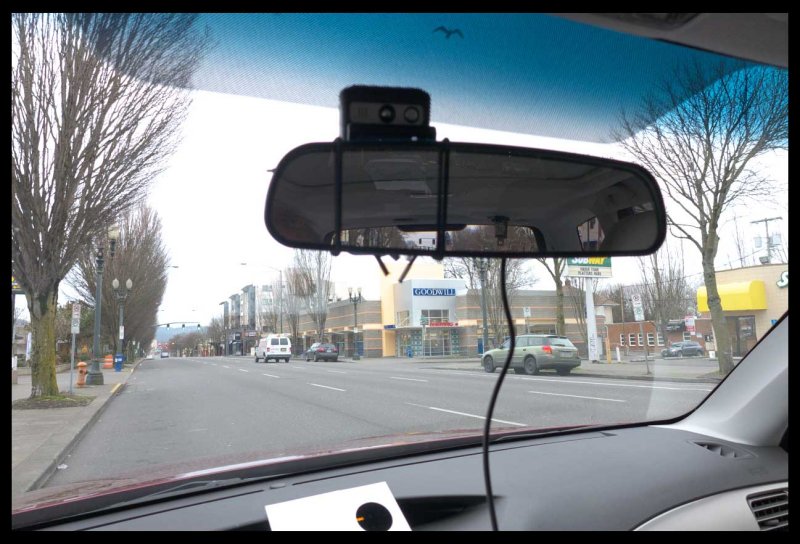 This worked though since you can't flipped or move the clip it is tricky either way.

I did not get a picture of it from the outside, because the cloudy day and glass made it hard to get enough contrast.

How does one thread the power cord around the window? Does one tape or glue it in place? There isn't any rubber type molding on my car to push it under, so it just falls out of even the side slot.

Try to stick it almost permanent to the rearview mirror.
Use some dual adhesive tape and some added material to keep the camera in the right position.
The power cable must to go up, not down.
You are right about black color, make almost everything black, even using electrical black tape or some black marker or even a black matte paint spray.

I think that looks a lot better and I imagine less noticeable from the outside. As for the wire, there is usually a gap between the headliner and the windshield where you can put the wire. Also on the A-pillar there is usually a gap as well. I have never needed glue or tape but every car is different. I'm sure 3M has some kind of small adhesive clips that could be used as well.
D

I feel your pain. I have been messing with solutions and am surprised manufactures do not have a universal center mirror clip figured out by now, or at the very least the smallest suction cup mount. I made a post about a solution I did, that fits very well with yours.