In regards to downloading videos, Wi-Fi is painfully slow, and I don’t like the option of removing the micro sd card or unplugging the power cable and plugging in a separate data cable.

Has anyone found a 2 female to one male micro usb splitter that will allow simply plugging in a usb cable to the spare dongle and loading videos to a laptop?

I don't think something like that exist, the best and fastest option are still to put the SD card in a SD card reader, and of course a fast card reader on a fast USB port, so USB 3.0 at least.
It is true and a even present danger than the little spring loaded memory card can launch to god know where, in that case it is smart to put a little tap of tape on the memory card.

Using a dashcam in mass storage mode are also pretty slow VS what a memory card with a high read speed can do in a card reader.

AS i recall using a dashcam in mass storage mode with a computer, you will get around 15 - 20 MB/s speeds, with the memory card in a good fast card reader you can max out the memory cards read speed, which are generally around 80 MB/s

Indeed, only the memory card launch problem should be a issue, but after all we are many in here that have launched and managed to find it again, way more then the people that have launched a memory card and never found it again.
It is a good idea to be careful inserting or ejecting ones memory card in the camera.
My last launch was a evening after sunset last summer, and it was a brand new 256GB card, i was not able to find it with the light of my phone, so i climbed the stairs to my apartment and got my "instant daylight" flashlight, and using that i found the memory card ( under front passenger seat where i already looked ) in a minute.

Another + of a good card readers also is you can play videos from it with no issue, using the camera as card reader or a old POS card reader you most often cant do that and get lagging playback.
I can play 4K / 60 FPS 100 mbit footage from my action cameras memory card in the card reader with no problems, this is nice as you can browse the footage on the card without having to copy it to the computer first, not least if it is only some of the footage you need.

But like i said if you have meat cleaver hands and 10 thumbs, putting a piece of tape on the memory card ( thin tape ) is a good idea.

I still dont do it myself, but it is a good idea none the less.
Here demonstrated on a CF card, which are a lot larger, but the principle are the same. 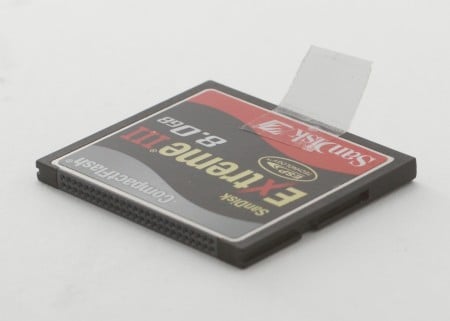 Thanks folks, yeah I am probably just going to eject the SD and pop it into a reader. I was just wondering if anyone had gotten around the inconvenience of slow Wi-Fi transfer and removing the card.
OP
K

The 13’ power cable that comes with the Garmin mini cannot support data transfer, if it did it would be the answer I’m looking for. So, can I try to find an aftermarket 13’ cable that can??

I think if there is the additional wires that allow for data transfer the camera would probably just go into mass storage mode, though not completely sure.

A USB cable are normally 5 wires for power and data, some USB looking wires to for instance a rear camera in a dual system can have upwards of 10 wires in them, only the + and - wires would be shared with USB pinout, the rest god knows but i dont think systems with these wires are interchangeable even if they had the same plugs ( often mini USB )

If you plug a regular USB wire ( USB A in one end and ?? mini USB in the camera end ) in between your dashcam and the laptop it will probably send the dashcam into mass storage mode, and so be powered by the laptop.
Dont know if you have some reason to save that much footage ( sound a little like you save it all ) and that are not really needed, on a good month i take about 10 files MAX of footage i want to share on youtube ( 3 minute files ) and after a trip thru powerdirector to trim the fat i have a end file for youtube lasting no more then a minute or so.
And thats just dumb asses in traffic of course,

The 13’ power cable that comes with the Garmin mini cannot support data transfer, if it did it would be the answer I’m looking for. So, can I try to find an aftermarket 13’ cable that can??
Click to expand...

unlikely to work as a power cable, Garmin don't use a standard config for power
S

Kcso121ret said:
I was just wondering if anyone had gotten around the inconvenience of slow Wi-Fi transfer and removing the card.
Click to expand...

The slow wifi transfer is a hardware issue. Dashcams generally do not have high-speed wifi for reasons of cost, size, cooling, and for not really needing it since you have other faster means to get the files. Cooling is the big issue- dashcams run hot already and adding heat from a working wifi can lead to overheating.

It's intended mainly to be used to DL a file or two to your phone on the go without needing to pull the card and to connect with phone apps; otherwise it's best left turned off until needed.

Awesome, thanks for all the input. I think the big hang-up I’m having is when will the camera enter mass storage mode. From what I just read on the Garmin site, of the two cables they provide, the shorter 5’ cable is a data and charging cable, and they specifically state it CAN be used as a power cable to go directly to the 12v adapter.

This will eliminate the need to remove the micro SD or unplug my camera and plug in a different cable. Now, as long as Garmin doesn’t use some proprietary cable, I should be good.

Kcso121ret said:
. Now, as long as Garmin doesn’t use some proprietary cable, I should be good.

I mentioned that as a problem already
OP
K

Here is the reply from Garmin support:


You should be able to use a third party cable to power the camera as long as the device is still receiving enough power. If the power is too low, the device can go into File Transfer Mode, which you don't want in the car. You can also ensure this doesn't happen by using a charge only cable rather than a charge/data cable.

must have changed them so that's a good thing then, they have previously used a proprietary cable, same as what they used for their GPS units, from memory there was a resistor between pin 4 and pin 5 on the USB connector

if it will work with a regular USB cable now make sure it's decent quality, you'll get voltage sag on longer cables if the cable is not sufficient gauge to handle the length, have a look at Monoprice cables and see if they have a suitable power/data cable, they generally have good feedback from those that have used their long cables
S

jokiin said:
they have previously used a proprietary cable, same as what they used for their GPS units, from memory there was a resistor between pin 4 and pin 5 on the USB connector
Click to expand...

I was thinking the cable related to an HWK and parking mode but there was definitely a resistor involved.

I'm not a fan of proprietary cables unless there's something substantial to be gained by their usage. This solves one of the two things I dislike about Garmin. They only need to go to supercaps to gain my full approval.

I now have data/power cables from my front and rear Garmin mini’s to one dual usb 12v cigarette plug in my center console. The cams stay in camera mode while powered. I then unplug the usb from the adapter and plug it into my Samsung Tab A via a usb to micro USB adapter and voila, camera is in mass storage mode.
This setup rocks compared to removing the tiny SD card or using painfully slow Wi-Fi.