So, after a couple short trips with my new Mobius I think a polarized lens filter would be a good idea.

I've seen a number of posts and videos showing how other have done it and to be honest, most of them require tracing the lens cap, and then using a knife or scissors to get the material the right size. In my uncoordinated attempt to put a hole in the lens cap that came with the camera, I kinda destroyed it (to say the least). Doing it this way might work, but it would not be pretty. My hands are too big to work on something that small.

So I shelved the idea for a while until I was watching my wife make some crafts using a 1" paper hole punch. Wonder if those come in other sizes. Yep. An idea forms.

Here in the US, everything is in inches, the choices for punches were somewhat limited and there are not many options. However, two of them appear to be the right size to work so I got two, One 1/2" and the other 3/4".

The 1/2" size actually is just about the size of the lens area itself and the 3/4" is just a tad bit wider than what the lens cap should be (don't have one to compare at the second).

So I got the following supplies:
This is certainly more than I would have paid for one if they were readily available, but the punches can be used for other projects and the film can make a large number of 3/4" cutouts.

So here is the camera, the punches and two pieces of film that was punched out using the two sized punches. 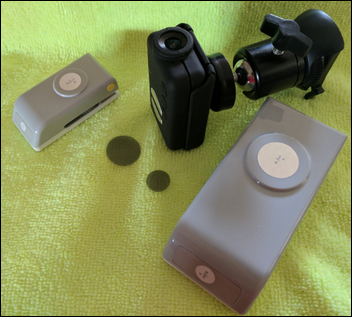 Shows the camera, the two hole punches and punched film from the two sizes.

What is interesting is that the 1/2" is just about the size of the entire glass lens area on the camera (so the right size to cut out of the lens cap. 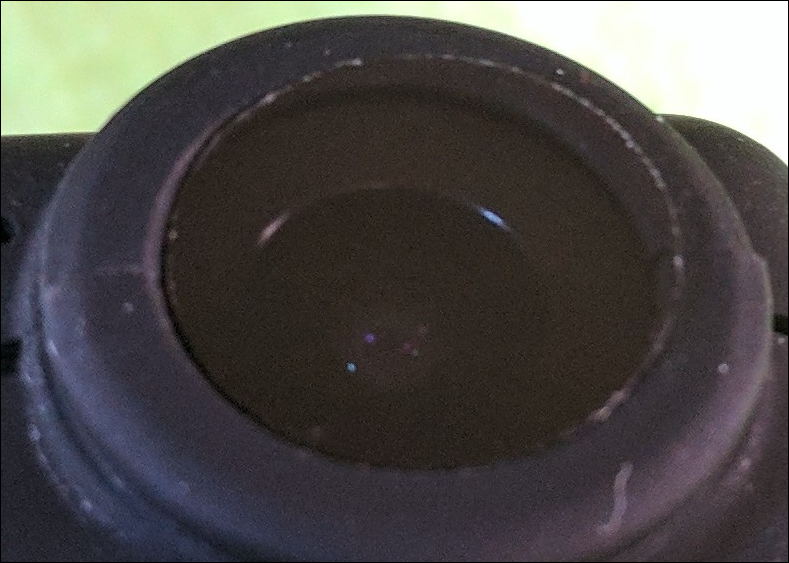 The 3/4" piece is just a tad bit larger than what the lens cap should be though I won't know until they actually arrive. 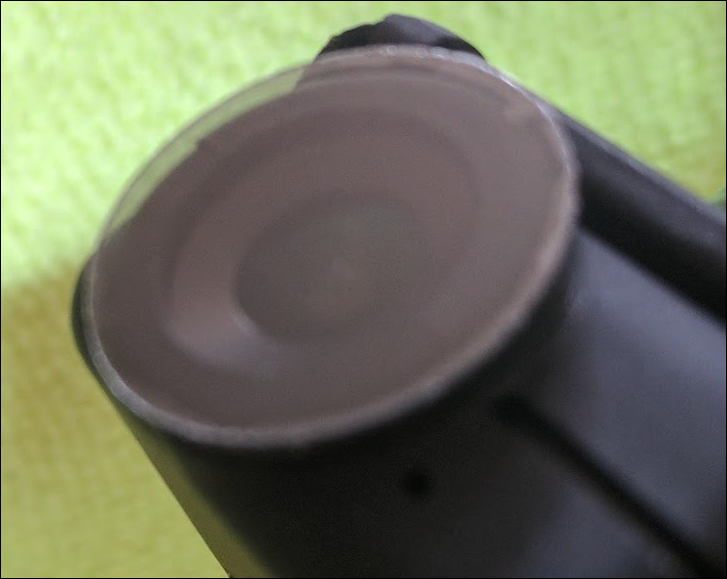 Note that the film still has the protective film on it (both sides). Unfortunately, the image is a bit blurry.

So the idea is to use the 1/2 punch to make a hole in the lens cap itself in the center, then using super glue glue the 3/4" piece on to the outside of the lens cap. If I do it right, I can get the tab on the lens cap to help me know what rotation to use for best performance.

The single hole punch is if I can't use the 1/2" one, I will just use it in the center and walk it out until the hole is large enough, but I think the 1/2 one will work.

With it on the lens cap, I can then using the tab as a guide, put the polarized lens on the camera accurately each time and be able to remove it if I am driving at night time.

Looks like the replacement caps will be here in a few days and I will be able to give this a shot.
Last edited: May 30, 2017

Nice. Don't use superglue. It gives out fumes that'll cloud the lens. Use hi-temp double sided tape or other adhesive. I found out the hard way. Did mine using bottle cap.
OP

Bungus said:
Nice. Don't use superglue. It gives out fumes that'll cloud the lens. Use hi-temp double sided tape or other adhesive. I found out the hard way. Did mine using bottle cap.
Click to expand...

Interesting, hadn't thought about that, and have not heard comments in any of the other projects about that.

I have all the stuff except the lens caps which have not yet arrived. I can think of a couple options for adhesive and will have enough materials to try different options.

I have enough polarized film to make over 50 cutouts for the lens.
OP

The cause of the clouding is due to your fingers. Even if you got dry fingers, you still have a slight moisture and produce an aminoacid called "Squalen", the main component of super glue is Cyanoacrylate, which reacts with the Aminoacid Squalen in a crystalization process.
Click to expand...

Makes sense in that super glue is used to get fingerprints to appear when you can't see them. They apparently make a non-fuming version of super glue as well, but I don't have that.

Matt_V939 said:
Or search for leather punches, like these which you can choose exact dimensions
(Search on aliexpres.com with descriptions)
Click to expand...

I considered using a leather punch, but didn't know how well it would work with a thin sheet of film. I already had a 1" punch and was able to test it before ordering the ones I did and the results were nice and sharp with no distorion of the film sheet.

krelvin said:
Interesting, hadn't thought about that, and have not heard comments in any of the other projects about that.

I have all the stuff except the lens caps which have not yet arrived. I can think of a couple options for adhesive and will have enough materials to try different options.

I have enough polarized film to make over 50 cutouts for the lens.
Click to expand...

Lens caps are due to arrive Friday. So a weekend project. Also have an A119 arriving tomorrow for another project.
OP

Ah.. the lens caps arrived a day early... The 3/4" punch is basically perfect in size. 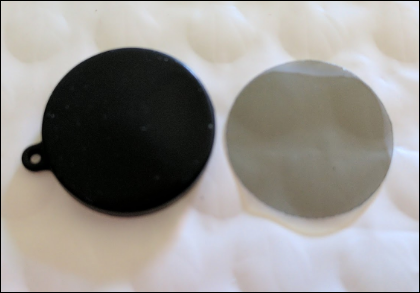 With the film over the top of the lens cap (no hole or adhesive yet). 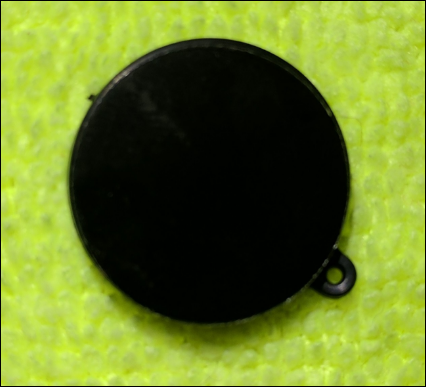 Will see if I have time later today to put a hole in one of the caps and mount a lens film on top of it.
Last edited: Jun 1, 2017
OP

Tried to put one together tonight despite lots of interruptions.

The hole in the lens cap didn't go quite as well as I thought it would because I couldn't get the cap into the 1/2" punch. The punch is designed for paper, even heavy paper, but the lip on the cap prevented it to get it inserted into the cutting area.

So I went to plan B, and used a single hole punch instead. Still took a bit to get it into the punch but not too hard. A punch dead center of the cap was not large enough (blocked some of the view). So I started to move the punch around a bit to make it larger. Not a neat look but you can't really see it when it is on the camera and it is not blocking the view at all. 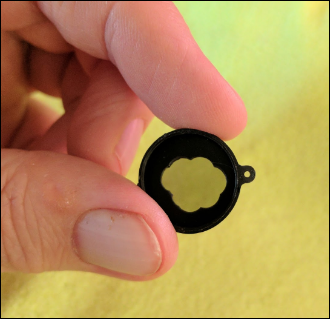 Next, I punched out another piece of 3/4" film and left the protective plastic on the outside of the lens. I found I didn't have any double tape and I didn't want to use the super glue I had so I decided to use some industrial rubber cement. No a good perm solution, but at least I could reuse the lens cap and I can cut more than 50 3/4" film rounds.

It worked out pretty good. When done, I removed the excess adhesive from the outside edge and let it cure for a while. Its on there pretty good. I then removed the protective plastic from the front and put the lens cap on on the Mobius. 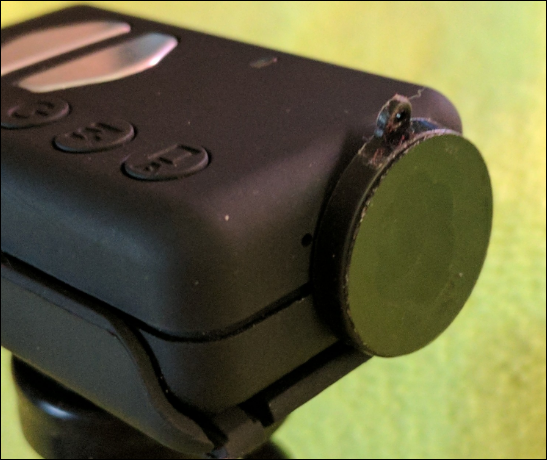 The tab on the lens cap will come in handy. First I can use it for reference for rotation to get the best view when I get it into the Truck and it will also make it easy to remove the cap without pulling the lens film off.

Will look for some adhesive tape or another solution the next couple days, but I think this will work.
Last edited: Jun 1, 2017
OP

Yesterday, I had the first chance to try this on a drive. The film on the lens cap worked quite well. I still need to work out the rotation to get the correct orientation for the best visual look though. That is going to take a bit of time since the only time I can actually see the difference is when the camera is in the vehicle in the right conditions so that I can see what the change looks like.

I don't currently have a way to see the live (or web) view of the camera while it is in the vehicle though. So the best way I guess would be to record a section noting what the origination is, switch the orientation record some more etc.. and then play back the video to see what looks best and note what origination I used for it.

I also tried out a Viofo A119 at the same time with a CPL already attached with the camera in a temp mount position which is not very optimal.

BTW we are full on summer here already though summer doesn't officially start until June 20th. Days are now in the 100's and nights are building up in temps as well. Yesterday was 101F with a low in the upper 70's (3am). Today will be hotter etc.. however, we are still in low humidity, was around 13% yesterday which makes it a lot easier to deal with.
You must log in or register to reply here.
Share:
Facebook Reddit Pinterest Tumblr WhatsApp Email Share Link
Top