Another day, another intersection.....turning right, with turn indicator.

Darwin should have cut the thai population down to a handful by now....

Was bored, did some exploring early in the day before got warm.
Headed to a Botanical Park on a ridgetop that is in the National Park system.
Very pleasant morning, not much traffic, nice scenery, nice weather, didn't get killed. 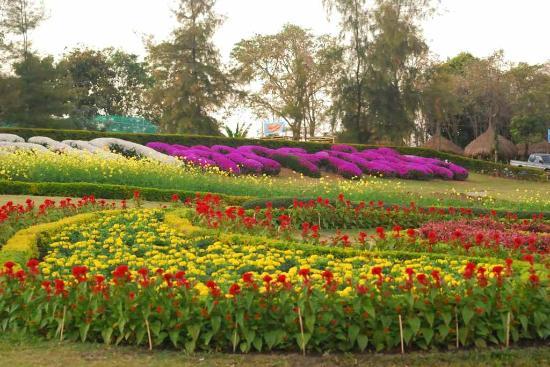 Lighting was better on the return trip, including the long 8 percent grade I was down to first gear for the trip up.

The deadliest period for road deaths in thailand starts friday, but people are warming up, now.

Going to hit the supermarket friday morning, pick up a friend at the bus station in the afternoon....via back roads, and hide until after new years.

They learn from watching the parents.

Motorbike with three underaged girls,, no helmet, riding against trafffic on loop road, crosses illegally through u-turn lane for other direction, proceed north a bit, pull off road, and turn back to ride against traffic on the shoulder after I pass them.

I reallyt wish there was more ways of sanctioning against poor parents, not least in my own country where so many parents are partly or totally subsidized by welfare / tax money of working people.
Here we have roaming "gangs" of teens from like 10 to 15 roaming the streets well into the night / morning, to me that's totally unacceptable.
OP

The government announced in advance there would be no DUI checkpoints on the roads during the deadliest week for traffic each year. I saw no police presence. The only cop I had contact with was the brother in law of a friend, who was very drunk, and his police bike was in the driveway of the house with lights activated for party decoration.

There were plenty of other check stations manned by red cross of rescue groups. They had some cones set up, usually a handful of people in uniform, doing nothing, maybe give you a bottle of water, etc. I was lost in one city, stopped to ask for directions.......showing the name of the resort in thai. They couldn't help, went back to their phones.
OP

Another day in Udon Thani, another child driving the wrong way in traffic......actually, two. The motorbike driver hauling Granny looked to be 10-11 years old.

This is a market area I used to live near, and frequently has bad accidents due to the people trying to find parking spots, parking anywhere, including in travel lanes, driving against traffic, and driving at high speed toward what is obviously a clusterMuck ahead, if you only had your head out off your ass.

Remind me of the top gear episode, where they drove thru Vietnam on mopeds, a place as bad if not worse when it come to traffic.
OP

A motorbike cuts between me, and the vehicle ahead, and runs into a pickup driving on the shoulder, either to get to the left turn lane, far ahead, or to get to the front of the que waiting for the light.
The motorbike was doing the same, If I have a chance I will show you how these shortcutters, delay normal traffic in peak periods. The bikes force their way on both sides of the travel lane to the front, almost blocking the road. Some then do the bogus workaround to run the light, others are busy playing grabass when the light changes, or foget where they are going, causing other traffic to sit through another 200 second red light.

I had a minor road trip last week, visited some friends, spent a few nights in a different city, in a hotel which turned out to be in the somewhat 'red light district'.
Amber light would be more appropriate, since you couldn't tell anything was going on unless you knew about, and went in the bars. Fairly mild, safe. I ended up making friends with a well preserved Lao lady who worked in one of the 'normal' bars.....we just shot the bull and ate a few meals, but it was educational.

After I headed south from that city I picked up a hitchhiking monk, who appeared to be very amused a white guy was driving a trike, didn't speak much thai...and was giving him a ride. He was either v-logging, or recording video as we drove. I may be a media star some day. He did bless the trike when he got off as I turned onto a side road. This was comprised of him chanting and slapping the bodywork of the trike. I had intended to save the video, at least for the audio....but it turned into another long day that saw that clip being recorded over before I could save it.

Headed to Bueng Kan for a few days, smallish city on the Mekong, rubber plantation area.

On the return trip I stopped at a few interesting temples I saw on the way out.

Here's a monk, I think the abbot, who was also fascinated a stupid white guy was wandering northeast thailand on a 3 wheel, 'sam lor' and couldn't speak much thai.

Friendly, wanted pictures of me, and reciprocated.

I hate to think I may be luring him away from his life of reflection with my jet set lifestyle, and fancy machinery.

On the return trip I was in 'sore butt/whose stupid idea was it to drive this thing so far? mode, and stopped at any interesting place I saw and could walk, stretch my legs.

On the way home later I passed what looked like a group of forest monks, walking on the highway, heading north toward Nong Khai. The monk at the rear was waving an empty water bottle at passing traffic. I had extra water. (always have a stash in the skylab) I did a u-turn, gave him a few bottles. By then other traffic had stopped, also.

Just remember Thailand are or was #2 in road fatalities, so be careful out there.
OP

Unless one of the african nations has a gas shortage, they used to be firmly at number 3.

One thing I have learned is when you are in a situation even a stupid person in the West would not think of overtaking.....a Thai driver will not hesitate. This means on blind curves, intersections, etc.

This is why I am friendly to the monks. I need the protection, and if nothing else, they will dispose of my body.
OP

Not everyone likes to travel alone.....

A few days ago, while walking i saw a motorcycle, with a side car ( rare ) towing a trailer ( a first for me when combined with a sidecar )
OP

I saw a goldwing, with sidecar, and passenger, towing a trailer that had a BMW r75/5 on it, one time, near Knoxville, TN, when they used to hold a big Honda rally there.

I considered pulling a small trailer behind one of my big bikes, briefly.
At that time I was mostly ranging out 200 miles or so to mountain areas, camping. I wanted to be able to haul a large cooler, tent, awning, some folding chairs, etc.
I found a manufacturer in australia who made a trailer hitch setup for my bike.
Luckily, before I took the plunge I had the realization that the cost of the sportbike tires per mile was a significant factor, and riding the bike for long distances to get somewhere was not really saving money when I had a 6 cylinder pickup that would get 19-20 mpg, hauling the bike in the bed, or a small trailer.

With the current trike, I'm not sure what the MPG is? I am starting to lust after one of the trikes with the 600-650cc subaru engines in them, but the riding position and room for driver don't look enticing, but most are built in small shops who can do custom stuff. They will do freeway speeds.

I do about 60 KPH on open roads and streets, it will do 80. I do get to pass an occasional vehicle.


I do get a lot of attention, and one older thai guy who was riding a vintage honda scooter, probably proclaiming it was 'made in japan', talked to me at a gas station and assumed I had just rode in from a nearby farm to get gas. 'look what just turned up in the turnip truck'.

For some reason he had two small antennas mounted on his handlebars, he told me 'wifi'.

In the hopes of furthering, positive, international relations, I occasionally try to help young thai children to learn english.

I forgot the 9 year old daughter of my friend was riding in the back of the trike, when this dip**** overtook me on the right, as I was making a right hand turn, with turn signal on.

I will be buying a car in the next few months, and it will probably be a 4 door pickup which I will install various defensive devices, and cameras....and drive legally, let the morons bounce off of me.