The DashCamMan review is there. But here you will find a little more information and feedback which is not necessary to be included in a review.

My Livue LB100 just arrived after 6 days from South Korea after placing my order to lightnspace from ebay.
In fact you are buying the WinyCam V300HD which is the english version of the Livue LB100, but the case is different and the Winy costs a little more in UK, maybe because of EU taxes. I think Livue just realised that WinyCam have a not commercial case and just made it in their own style. 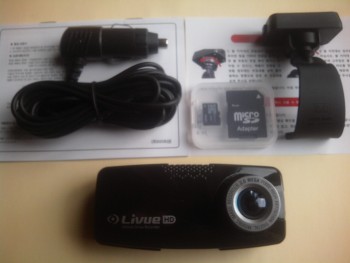 Different mount systems: first cameras were delivered with the ball mounting system, but the actual are with the vertical adjustment one. 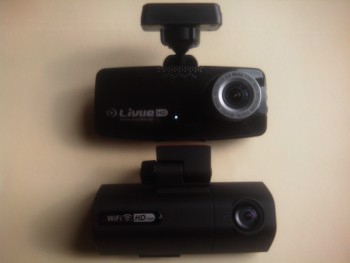 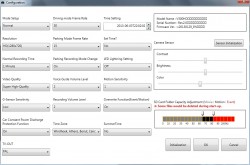 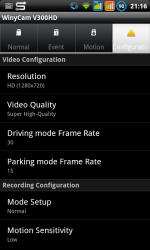 - Android application named WinyCam V300HD
- english viewer (use the normal, not the New Viewer because it create wrong setup.cfg file)
- SD Card: Manual, firmware, default configuration file
- the firmware filename must to be WINYCAM_V300_yymmdd.bin , for example: WINYCAM_V300_121115.bin
- on the WinyCam website you can find a newer firmware.
- if you want to use the korean firmware you must use the Livue PC software or Livue Android application, all being in korean. For the camera sold on ebay you must use the WinyCam software if you want english
- If on the bottom-right screen you will see V300HD, the firmware installed is the WinyCam, but if is FW01, the firmware installed is the Livue
- the description of the setup.cfg file 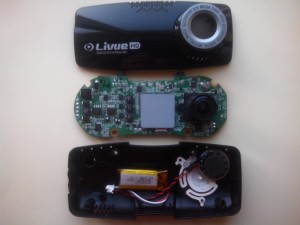 Operation:
- How is working the LED. Video. The LED can be turned off.
- How to format the card using the camera big red REC button: take out the power cable and wait the camera to turn Off > press and keep pressed the REC button and insert the Power cable > after the Power LED is blinking and the voice will announce you the card is formatting, release the REC button and after max. 1-2 seconds press it again for very short time.

I like:
- have the Power saving features inside firmware. You are nor forced to buy an expensive Power Magic, or UPC because you can set the same things in camera preferences
- a lot of settings. even you can adjust the camera sensor settings
- the mount even is stuck, the camera can be removed from it. You need to use both hands, but is easy and if you are in some area you don't like is better to take the camera with you
- the voice option is nice
- you can turn off the LED so you don't need to cover it with some tape. So easy and smart compared with many other dashcams including Itronics
- the GPS antenna (if ordered) is included in the mounting system
- a lot of vent holes so the camera will cool

Don't like:
- I think the camera is in 60HZ only, so for 50HZ countries is possible some flickering because of city lights
- not full black. I like the Itronics black matte style. Even the Livue is black, it is glossy. And the lens mount is gray. Why? But better than pink or white WinyCam
- the LED is very nice, bu stupid because of reflecting in the windshield, in parking mode the LED is possible to start the recording not just stay in stand by. Lucky, we can turn off the LED from the software applications.
- too sensitive white balance which cause "jumping" colors
- no Mute button
- my lens were blurry on the left side. The seller fixed the problem for me.

Some pictures about this camera:

Wow, that was fast Mtz. Looking forward to your review! For $100 on eBay it seems like a good deal.

New:
Added on first post a video link about how is working the LED.

Oh man, that stinks, hopefully you will get it all figured out soon!!! Screenshot looks great tho!
OP

Back on business.
The Livue LB100 english version dashcam is in reality the Winycam V300HD but with the Livue case. I just discovered this looking very carefully at some screenshots from the manual. :roll:
The Android application is here and is in english even the screenshots are korean.
The korean setup.cfg file is different from the english setup.cfg file so this was the reason my camera didn't updated. When the setup.cfg file was recognized by the camera a robot female voice said "Setting has been changed".

The PC player is the player which is on the camera SD Card and its name is Winycam viewer. Don't use the official Livue player.

Amazing that you were able to uncover this. Glad it worked out. Is the Player in English?
R

I ordered mine before I saw this post. anyway it is out for delivery and I ordered it on wednesday which is superfast shipping for almost 7000 miles away. Anyway for some reason I thought it had a suction cup mount but from your pics it looks different how does it actually mount? can you explain how i can update mine in english? :mrgreen:
OP

You must use the player from the SD Card not the player from the it-on.co.kr site even it seems to be a newer version. For Android I provided a link, but it better to use the PC software.
The mounting system is with adhesive tape, a ball so you can rotate camera in any direction, but the whole mount is something like a hand which is holding the camera. You must open that had to take the camera out, but that hand have good muscles. In this way on your windshield will remain only the mount. You can even unscrew the ball system but not recommended because inside is a O-ring. The ball is OK also without the O-Ring so no big deal if lost it.

Until now the problem remain the left side blurred image, as you can see here:
Keep looking on the left side of the screen and loolk at the characters, when going to right them become clear.

Amazing that you were able to uncover this. Glad it worked out. Is the Player in English?
Click to expand...

Yes, I will update my post with the download link for the sowftware and manual, also with the setup.cfg file if somebody will have wrong date at least to be in the year 2013, not 1975, and also contain the best settings and LED off.

Because I know everybody when is thinking to a good dashcam is thinking about night mode and if have some experience the next question is: how is compared to Itronics?

The actual links are with default camera settings. Not so bad but needed a little tweak so I am not satisfied. I will test more. So let's begin:
1. Livue LB100 - Night - With or without city lights
Now more people will understand that is a big difference in night mode depending on city lights. But with Livue I was lucky because is very good in night mode even the white balance is not so sensitive and not well calibrated for a traffic camera. Here is a secret. look to next clip and find it.

2. Itronics vs. Livue - Night - powerful city lights
Regarding this video, who will guess what is the secred of Itronics? In night mode I can say Livue is more bright than ITB-100HD, both with default settings but the ITB have nicer image. Why? :roll:

3. Itronics vs. Livue - Night - no city lights
Maybe the Livue is brighter just a little? Even you don't like the colors compared to the "alien blue" of Itronics.


After all testing days I can say the wireless (of ITB-250HD) is the best thing from all my cameras when working with files frequently.

Mtz said:
Until now the problem remain the left side blurred image, as you can see here:
Keep looking on the left side of the screen and loolk at the characters, when going to right them become clear.
Click to expand...

Looks like a mis-aligned lens, the windscreen itself is in focus.
Last edited by a moderator: Sep 16, 2013
J

Itronics looks quite better even with wider lens.
G

Thanks for all your work, Mtz. This model is rather tempting.
OP

Jedd said:
Itronics looks quite better even with wider lens..
Click to expand...

I compared with the best camera which can cost 3x more. But also we must not forget the LB100 is $250 at another ebay sellers.

Is strange because the lens seems to be OK in this video:

Guess you're the lucky one with a faulty model.
OP

As I said, the lens seems to be OK, look at this picture, I can't see any blurred area and the image seems perfect even on the left side.

Maybe is because of my windshield?

Well I just picked one up. Surely the price will go up soon especially when this normally sells for 2 bills.

Hope I get this soon as I am really excited right now. Only concern is getting the English stuff in there.
R

ok all I did was install the winycam app on my daughters galaxy, inserted the card, changed all the settings to super high quality, put the micro sd card in the cam, plugged it in and boom an english voice started talking.. The date and time are still wrong but here is a video on a cloudy day..
Last edited by a moderator: Sep 16, 2013
OP

Try to use the PC program because is possible to obtain the correct date. Maybe you forgot to check the "Enable time" box from the Time Setting option.
Set your time to a future value. If now is 13:08:30, set the time for example to 13:10:00 to have time to insert the card at start the camera a 13:09:40 to obtain the correct time so about 20 seconds early than your fixed value.
If your camera time is adjusted with the new value, when the camera is starting the voice will tell about settings updated.

Also I updated the first post with some new information and fixed some of them.