Hardwire kit -how to install into fuse box

I've recently got an E-PRANCE® New Mini 0801 Original Ambarella A2S60 Dashcam, along with a hardwire kit and Piggy back ATC Fuse holder (Pics below) 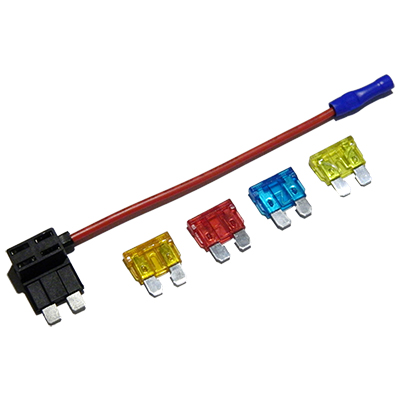 My understanding is that the hardwire kit's red wire goes to the fuse adapter, and the black wire gets grounded on the car? Is this correct?
And so i'm clear, the fuse adapter, I would remove the fuse say from the stereo, insert the adapter into its slot, but the stereo's fuse into the lower of the two fuse sockets, and another fuse into the top (As the long red wire is in line with that socket, so i'm assuming it would go there).
Lastly, the Piggy Back Fuse holder came with four fuses, 1x5A 1x10A 1x15A 1x20A - So i'm going to assume I use the 1x5A fuse with dashcam as its a 5A device? Or would it be better to put a larger one in incase of additional short-term power draws?

Thanks, and i'm sorry for the million questions.. just don't want to blow the car's electrics or anything!

I believe the included power supply that ships with the mini is only a 2A output. I would not go beyond a 5A fuse when hard-wiring it.

I will let others respond to the rest; I drew power from my car's moon roof wiring above the roof liner, not from the fuse box.

It looks like that fuse holder/wire should have the car's original fuse in the position that completes it's circuit that you are drawing from, second fuse for your camera. Yes, red wire on adapter to red fuse wire. Yes, any gnd for your black wire - metal part of the car. Just watch if it's metal under the dash that it actually goes to the chassis somewhere. Some metal brackets aren't grounded. 5A is fine. It draws way less.

Just choose a fuse that is powered on when your ignition is on so that camera shuts off once you shut off the engine.
S

Check out my thread here.... I basically did the same thing but without the hardwire kit. I used a female "cigarette style" lighter plug to plug the stock mini 0801 into. Then wired that to the add-a-circuit. I grounded the black wire by wrapping it around a hole in a piece of metal I found that goes to the frame and electrical taping it. Not the best solution. I tried screwing it in to pinch it to the metal but didn't have the right tools. I'll come up with a better solution later. For switched power I used my cruise control fuse and I'm running a 7.5amp fuse for the camera.