Making a thinner, 2 wire charging cable, so it's easier to hide it in the gaps of my car 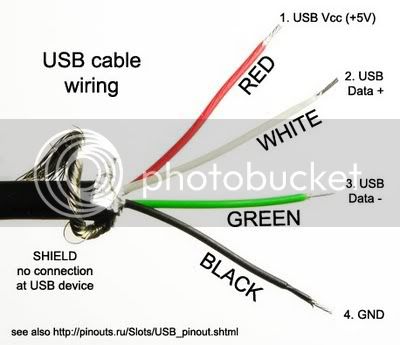 I'm thinking for using two thin guage wires for the positive and negative wires of the usb micro / mini connector. That way it's easier for me to place the wire in small spaces (ie. between my headliner and windshield, etc....)

Has anyone done this? and does anyone forsee any issues?

As long as the guage is enough to carry maybe 1.33x the mAh draw of my dash cam, I'm predicting not to run into any hiccups.

Any one have any insight into the aforementioned, please chime in.

Thanks in advance for anyone who can provide feedback/insight.

Lack of shielding might cause problems with interference. Or it might not.
Apart from that, as long as pin 1 goes to pin 1, and pin 4 goes to pin 4, and the voltage drop isn't too much, it should work.
Someone here posted a handy table of wire gauges, lengths and currents vs voltage drops, you should find that or look it up to see what gauge wire you need.

Edit> Outer insulation is also quite useful for protection. But if you have proper fusing at the power source end you could get away with thin outer insulation or even none at all. At your own risk, of course.
S

I think this will help:

You can get dumb usb cables. These have no data lines but instead only have power lines.

I use Portapow cables (20AWG) and they are great. The insulation isnt stiff making it easy to run into channels. (Comes in Micro USB only though)
Last edited: Dec 3, 2016
2

SawMaster said:
I think this will help:

The table doesn't list thinner cables than 16AWG but most dashcams requiring 5v 1A are supplied with 22AWG or 24AWG cables of 3-4 metres long. 28AWG works with some cams but not with others.

2000rpm said:
The table doesn't list thinner cables than 16AWG but most dashcams requiring 5v 1A are supplied with 22AWG or 24AWG cables of 3-4 metres long. 28AWG works with some cams but not with others.
Click to expand...

actually 28AWG is probably the most common in the cheap cameras, it's quite often not up to the task though
S

I should have looked more closely; my bad I had to do some digging (about 5 minutes) to find that one, thought I had it bookmarked but I didn't. There's another wire gauge chart on these forums somewhere- I remember it- but I have no clue where it is.

These are "switching" power supplies and they are electrically noisy. Unshielded, they might interfere with your radio, GPS, and possibly other electronics. Plus longer runs (such as to the back of the car) will have voltage loss and it might be enough to cause problems with the cam.

I'd recommend that you put the PS in back. This will lessen the chance of interference and allow you to run just one wire to do the job (12V hot) or you might even have a circuit in the back already which you can tap into, saving you even more work. If there's a radio antenna back there, don't mount the PS near it and don't run the USB cable beside it's feedline. And at worst, one 18ga 12V 'hot' wire is all you'd need from the front- you can tap a ground connection in back. About as easy as it gets

If your device uses more than 100mA, you will need those data wires. For a USB port, a USB device is only allowed to draw 100 mA until it asks permission from the host (using the data lines) to draw up to 500 mA. From a charger, the charger has resistors connected to the data lines, and the configuration and resistance of those resistors tell the device how much current it can draw from the charger. Without those data lines, a well designed device won't draw more than 100mA.

Using thin wires is a problem, especially when those wires are long. The voltage drop across the wire follows the equation V=IR where I is the current drawn, and R is the resistance of the wire. The resistance of a wire is proportional to the length of the wire, and inversely proportional to the crossectional area of the wire, and the crossectional aria is proportional to the square of the diameter. Halve the diameter and you quadruple the resistance.
With a switching power supply in the device, the power drawn is constant. Power follows the equation W=IV (watts = current * voltage). If voltage drops, current has to increase to keep the watts constant. So the more resistance in the wires, the more power is dissipated in the wires. Eventually, the amount of voltage drop in the wires will cause the device to malfunction.
S

DAP said:
If your device uses more than 100mA, you will need those data wires. For a USB port, a USB device is only allowed to draw 100 mA until it asks permission from the host (using the data lines) to draw up to 500 mA.
Click to expand...

I have to disagree here. While some USB ports operate this way, many do not but instead will power up to their rating with a 'power only' type USB cable. Same thing goes for many pre-wired 'wall wart' style PS's as well as many 12VDC pre-wired PS's

I do this all the time with my USB powered LiIon chargers which draw ~500mA and I've measured the draw. USB3 may regulate like that and most computers do but it's neither the norm nor universal.

What part of there are no power specifications being universally held to (which you incorrectly stated there were) is it that you do not understand?

Look up how USB developed via your preferred references and you'll discover numerous specification changes made through the years and that nobody ever really adhered to those recommended standards for long if at all. Only the pin-out has remained constant. USB was never originally intended to do what we do with it these days, but like anything computer-related it's been pushed beyond it's original design intentions because it can be done and because it works fine like that. USB3 is a whole different matter unrelated to this thread. And please know what you're speaking about when offering advice to folks.

Standards are a wonderful thing. But they usually say what should work - not what must not work. It's worth experimenting to see what you can make happen.

The problem comes when people stretch their luck (and their cables) too far then complain "but it worked last week with the same cable." Too bad. If you go out of spec you have to accept it might go wrong randomly.

Luckily supplying power can be a simple thing. You can test how a USB power source behaves with just a data cable. And you can measure voltage and current. Probably the only missing element is knowing how low a voltage a device can cope with. So testing is needed. And if it goes wrong in future... you know there's at least one thing you need to check.

Sent from my tap-to-talk using Tapatalk

Having designed USB and built USB devices in the past, my preferred reference is usb.org.
It is fine to hack your own stuff as you wish, but too many people like SawMaster think that is OK for Commercial products, and we end up with all kinds of non-functional junk for sale.
USB is and always has been a fully specified bus, unlike many previous PC buses (parallel port, serial port, ISA bus etc). There is a specific logo associated with USB devices that meet the specification that devices that don't meet the specification (or have not been tested) are not allowed to use. I try to avoid buying USB devices without that logo to avoid the junk that people like SawMaster produce.

USB has been bastardized so much thats its turned into defacto standards. USB was initially never designed for charging/supply but it was a cheap and convenient way for device manufacturers to power their devices.


DAP said:
If your device uses more than 100mA, you will need those data wires. For a USB port, a USB device is only allowed to draw 100 mA until it asks permission from the host (using the data lines) to draw up to 500 mA.
Click to expand...

Newer Dedicated Charging Ports (DCP) aka dumb chargers have their data pins shorted so all it does is supply regulated power to however much a device draws. The short or lack of data lines tells a smart device its a dumb port.

Your standard computer USB port or smart charger (w/ data lines) however complies as a SDP (Standard downstream port). Once you plug in a smart device it will have enumeration and detect its a CDP (Charge Downstream Port) for smart/faster charging like QC2.0.

Smart devices can be charged dumb*... and dumb devices like a 5v fan can be powered on smart usb port (up to current limit)