My dashcam is a Cobra DriveHD Bluetooth 855 Model.

Sometimes when I place the micro-sd card into my phone, random video files (roughly a third or so, maybe half) will appear as '0 bytes', and obviously won't play. Occasionally instead of 0 bytes, the file size is just unsually small (like 50 Mb instead of 256 Mb) but also won't play. It will return a message saying "This file type is not supported.". I want to note that they all work on the dashcam before I remove the card.

Whether a file shows up like this seems to be completely random. As a precaution, I turn off my dashcam before removing the SD card, and on my smartphone I unmount the other SD card I have before switching it with the card from the dashcam. When I place the SD card back into the dashcam, all of the files (regardless if they were viewable on the phone), are corrupt.

My guess is that the SD card is responsible. It has no brand name and was included with the dashcam (brand new), so it might just be cheap junk. Before I make that assumption and buy a new card though, I wanted to come here in case there may be other causes. I haven't tried testing it with my other SD card because it's full of important files. 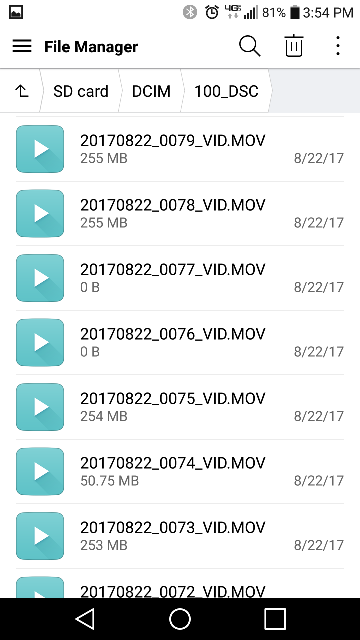 bad (or fake) card is the most likely suspect, even higher chances if it's a no name card
OP

That's my guess too. It's upsetting though that a Dashcam company would actually provide such a low-quality sd card. Seems like they would be better off not including one at all.
S

Handbanana said:
That's my guess too. It's upsetting though that a Dashcam company would actually provide such a low-quality sd card. Seems like they would be better off not including one at all.
Click to expand...

That's why most cam manufacturers don't include cards, and the few who do almost always include only the better ones. No point in increasing your own prodyct liability and possibly increasing warranty returns Don't know why Cobra would do it this way but I'd rather buy my own cards so that I know what I'm getting as I only use the good ones

Get a good card and these problems will probably disappear I like Transcend 400X and Samsung EVO Select/ EVO Plus but a few others are also known to be really good for dashcam use.

I bought a new micro-sd card from PNY today and let it record for a while. Much fewer corrupted files than in the old one but there's still a few. Interesting. Don't know if I care enough to do anything else about it, but I'll probably avoid Cobra whenever I'm ready for another dashcam.

Handbanana said:
I bought a new micro-sd card from PNY today and let it record for a while. Much fewer corrupted files than in the old one but there's still a few. Interesting. Don't know if I care enough to do anything else about it, but I'll probably avoid Cobra whenever I'm ready for another dashcam.
Click to expand...

Cobra is a newcomer to the Dashcam market as is Garmin, Anker, and a few other well-known electronics brands. All of them are discovering that dashcams are quite a different game than the ones they have previously excelled in Only Garmin seems to be putting forth the needed effort to develop their cams properly. As there are better cams with better histories of performance readily available, few cam enthusiasts will recommend any of these except Garmin. I've seen too many problems reported with Cobra for me to want to try them.

I don't know much about PNY but they do make some cards which are widely known to work well in most dashcams, so I doubt this is completely a card problem although that possibility still exists. Some cam types, and occasionally individual units, can be rather picky about which cards work well with them. It's part of the game more experienced cam owners expect to deal with somewhere along the way. Good cards ain't cheap these days but you gotta pay to play if you want good results. The same advice goes for cams too- below a certain price level nothing is any good but plenty of people buy those cams anyway simply because they are cheap

If you're going to be in the dashcam game, there's some good freeware you should have and use h2testw tests cards for functionality and helps identify fake cards (which are unfortunately very common). SDformatter is good for formatting cards properly and allows many cams to use larger cards when you format them to fat32 which Windows cannot do. Other good formatting freeware is available. And there are several good viewer programs which perform much better than what Windows gives you. VLC media player and Registrator Viewer are two of the better ones. Oftentimes what is thought to be a cam problem turns out to be a viewer problem instead so it's good to try several before deciding the cam is at fault.

Good dashcams aren't that expensive these days but as with everything else you don't get what you don't pay for, so trying to go cheap will often disappoint and end up being a waste of time and money. Get a known good cam and a known good card at whatever prices those cost and you won;t be disappointed

The few corrupted files you see now, are those the last ones in driving sessions ?

SawMaster said:
Cobra is a newcomer to the Dashcam market
Click to expand...

a really well known name and it amazes me why they put their name on such low end product, they could be doing really well if they rethought that process


SawMaster said:
SDformatter is good for formatting cards properly and allows many cams to use larger cards when you format them to fat32 which Windows cannot do.
Click to expand...

should point out that SDformatter will return a card to its default config, which is important as Windows doesn't follow the correct standard when formatting the cards, it won't however format large cards to FAT32, that needs to be done by alternate software like GUIformat, or preferably in the camera if it's a camera that has large card formatting support built in
S

Thanks for the correction Jokin I use something different (MiniAide) because it's the only one I can make work correctly with the awful W8.1 laptop I use.

Same with Motorola, their cams are worse than a fake G1W

If the files play fine on the camera, before the card is removed, then the card and the files seem to be ok.
@Handbanana, why do you say "As a precaution, I turn off my dashcam before removing the SD card"? Did you use to remove the card with the camera still on?
Last edited: Feb 24, 2018
You must log in or register to reply here.
Share:
Facebook Reddit Pinterest Tumblr WhatsApp Email Link
Top