Newbie in Maryland, driving too much, Garmin & ext. Battery Question

I have recently discovered the topic around dashcams after a traffic incident by a good friend of mine.
I drive about 20k Miles per Year, usually long distance.
I am thinking of buying a Garmin Dash 56 OR Dash Mini.
Due to occasional rental car journeys I wanted to ask the following general question:

I am planning to buy a Garmin Dash Mini OR Dash 56.
The Mini does not have a battery built in, the 56 does.
If I connect the 56 to an external battery how would be the charge cycles with an external battery, lets say from Anker.
I am worried that once the build in Battery from the 56 is charged the external battery would not start recharging automatically again once it has been fully charged.
The Dash Mini does not have that problem since it doesn't have a built in battery, however I do like the additional features of the 56 for a marginal price increase.
Thanks.

Welcome to the forum.

1: you do not want a dashcam with a battery in it.
1A: the battery are not for recording, like the preferred capacitors / super capacitors, it is just there to finalize the last recording in case of a event where power might get lost.
1B: the lithium batteries often mean a shorter camera lifetime, these batteries dont cope well with the some times ( summer ) warm cabin of a car, but also cold can be a issue for lithium batteries.

Normally dashcams are powered via the lighter socket in the dashboard or console, but if you want to not have a wire "draped" across your dashboard, or want to use the parking guard some dashcams have then you need to have a hard wire kit, the hard wire kit also have a Battery Discharge Protector build in stopping the camera from discharging your car battery below a voltage set bu you ( that should be 12.2 volts at least )

The capacitors / battery ASO in a dashcam should charge when the car are running, but some battery systems seem to forget this requiring you to charge it like a phone,,,,,, and thats just silly.
A dashcam should be set and forget in the sense that you do have to look over your footage on the memory card now and then ( every couple of months ) as the memory card are most often the weak link in a good dashcam.

I run 128GB memory cards in my cameras ( or more ) but a 128 GB card it take me 10 minutes or so to go over, mainly looking at first and last file can launch in the player i use ( pot player ) and then the seconds it take for me to register the place it is recorded.
So in my case first and last files are always / often, where i live / park - my favorite gas station - my friends place - my mothers place - my sisters place - where i go shopping.
Actually owning a dashcan at least i found out i am a big creature of habit driving the same routes over and over.

Anyway this way i skim the first and last files in every drive session, and then after that i skim some random files in the same way.

The good thing is modern dashcams will sound a alert if you have forgotten to put the memory card in the camera or it fail somehow during recording, this was not the case in the old days ( not so long ago ) so people not looking at their footage now and then, had a accident, and find out their camera hand not been recording for months.

There are not many suction cup cameras left in this day and age, but some use a universal suction cup, for instance with wedge shaped cameras like the viofo brand and others, this mean you can use the camera on its stick on mount in your own car, and on the suction cup in rental cars ASO.
Stealth in the install are a big thing for many of us, and any camera with a suction cup are not stealthy at all.

A suction cup like this, have a nice flat surface you can mount any dashcam mount to ( stick on cameras often come with a couple of mounts ) 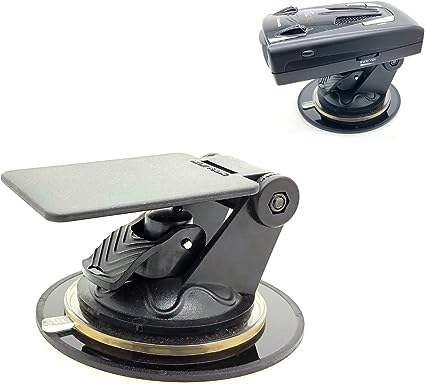 NOT the 'Mini'- it has problems. The 56 evolved from the 55 and is a good cam, but it is one of the few good cams which uses LiPo instead of supercaps, and LiPo batteries don't fare well in the hotter climates. Should be OK in Maryland as long as you don't run parking modes with the car in direct summer sun.

We have several knowledgable members in the Garmin forums who use the 55 and 56- you should read what they have found. Other than size and the LiPo I wouldn't mind having one but it's too hot here in SC.