Hello,
this thread contains command line tools for modifying Novatek single (for now) image firmwares. I will update it everytime I update one of the tools or add a new one.

Description: This tool is able to calculate the checksum of Novatek firmware images in raw or BCL format. For non-default images it can calculate the baseval for checksum calculation as well. 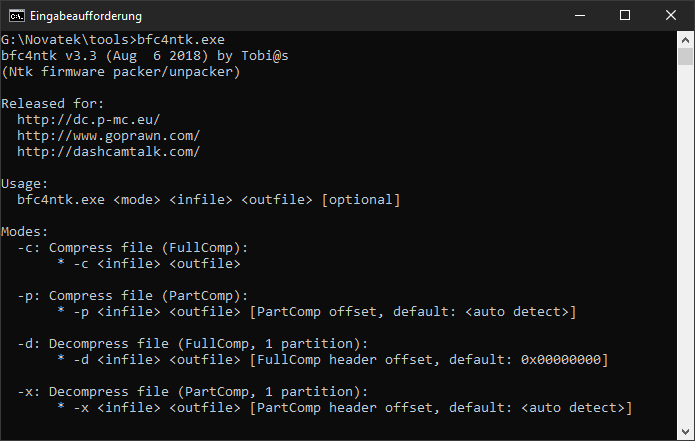 Description: bfc4ntk is a Ntk firmware packer/unpacker based on BCL (Basic compression library)

It's a multi-image binary, thats why bfc fails.
Strange that DENOVA doesnt detect this. @nutsey have a look at 0x2764c4, I have no idea why DENOVA does not see this. I thought it searches the binary for the pattern BCL1
@regzno Dunno why DENOVA didn't work for you, but it does for me:

Thanks and cheers,
Martin
OP
OP

Will have a look at it

Thanks for watching, but first enjoy easter!

I just read that thing about multiple and single partition files and checked on a different computer (an old XP VM):


Code:
So it's only one partition which should be ok. But I just saw that the 2.02 firmware (which generates a zero sized decompressed file) is quite larger than the 1.1 firmware that I can decompress.

Thanks for watching, but first enjoy easter!

I just read that thing about multiple and single partition files and checked on a different computer (an old XP VM):


Code:
So it's only one partition which should be ok. But I just saw that the 2.02 firmware (which generates a zero sized decompressed file) is quite larger than the 1.1 firmware that I can decompress.

They added another partition, now its a multi-image binary. Unfortunately this requires "manual" reassembling (joining the two partitions)

Thanks for checking. I can't make it work, don't know why.

Might be an issue with your OS, maybe @nutsey has an idea
OP
OP

BFC has received an update to v1.1 to comply with Novatek code alignment rules
Last edited: May 17, 2017
OP
OP

This editor will be able to parse unpacked novatek firmware binaries and apply modifications to it.

Finding the movieparam struct was the most difficult thing... Regex for byte arrays dont exist...........

BFC just received another update. Initially I planned to just add decompression from a specific address to support multi-image binaries but I found a critical access violation bug during testing..

Changelog:
-fixed access violation bug
-removed unneeded compression algorithms
-modified parameter syntax: bfc compression now no longer requires you to enter the algorithm (since it only supports lz77 now)
-added "multi-image" support, well at least kind of: You can now provide the offset of the bcl compressed partition you want to unpack and bfc will start extracting at that address

Code:
This release is also part of a preparation to build modular applications for a soon to be released GUI-wrapper


EDIT:
bfc mod 2.1 is released as well.. Download from my page (linked in op)
This release supports PartComp extraction via 'x' command:

How to identify different firmware types for uncompressing with bfc:

EDIT: Please have a look at this thread for BnGui: https://dashcamtalk.com/forum/threads/bngui-bfc-ntkcalc-gui-beta-0-3.29281/

Working on an addition for bngui, a Resource editor, PoC strings editor shown below, bitmap/sounds/bootlogo/... should be easily possible as well. But theres one problem: Every resource has a fixed size and cant be adjusted dynamically (well not as dynamically as with ambarella and their RomFS contents)
(Language 6 - 9 show weird characters since i dont have cyrillic support installed on my computer)

And lang in icon bmp