I’d like to hard-wire a SGGCX2PRO to keep the cabling tidy but I don’t want parking mode or any battery drain when off.

Is it possible to not use parking mode when wired in? I couldn’t see an option for this in the user manual.

Also, loop recording is set to 3mins by default but I don’t understand what this means sorry. Does this mean it saves a separate video file every 3mins?

Any help would be much appreciated.

Yes I am almost certain you can disable parking mode, if you're just worried about parking mode draining your battery it wont. But if you cant turn off parking mode you can just have the two fuse taps set to switched lives, and as for loop recording, the camera will record in 3 minute segments and when the card gets full it starts overwriting the oldest files, theres a button on the camera to lock files so they arent overwritten

Ive seen some people damage cameras as the cables dont have a voltage converter andi t puts too much power into the camera, would this not be the case with this?

Skylar132 said:
Ive seen some people damage cameras as the cables dont have a voltage converter andi t puts too much power into the camera, would this not be the case with this?
Click to expand...

Welcome to the forum BenS

As said cut wire at the plug on the 12 V side of the PSU box, buy one add a fuse adapter of the size your car use, or a inline fuse style adapter if you tab into the middle of a wire, put a 5 A fuse in what ever adapter you got, and then install it all.
There are just 2 wires in the wire you cut to get access to them. Red wire +12 V / Black wire ground -12 V ( you of course want to wire the +12 V into a ACC fuse that is only on when your car is running )
You do not need the hard wire kit with any SG camera if you do not want to use parking guard, you can instead modify the provided one and so keep your in dash 12 V socket free for other stuff.
The camera will just act like normal

It is normal for dashcams to record in smaller segments, 3 minute is what most use, but you have a few shorter and longer options in the menu.

If you want to stitch more clips together into one large video that is easy in any editor, here is a example using power director, but it is much the same in other editors.

Wow, great community, thanks for all the answers - very helpful.

I haven’t done any auto wiring before but you guys seem knowledgeable - is it something you guys could help with? I’m not sure how to locate where to wire it Into.

Cheers and thanks for all the help, much appreciated.

No the provided kit only work when the power is on, or that is if you use it on a circuit that is always on then the camera will also be always on, but there are no low voltage cut off in the provided kit, those things only come with the 3 wire hard wire kit used for parking mode.

The separate hard wire kit is 3 wires, it have 1 +12V ACC wire, which you could say is the control input, telling the camera to cone on ( if off ) or change to / from parking mode.
The wire that actually power the camera when the hard wire kit is used is the always live +12 V wire, and then of course last you have the shared - 12 V / GND wire.

So as the provided power source only have the 2 wires, this is why you must wire it to a fuse / circuit that are ACC and so only on when your car is on, otherwise the camera will be on and recording all the time and it will run your car battery totally flat, which is very bad for a lead acid car battery's lifetime.

My recommendation is to wire into the fuse box with a add a fuse adapter, which simply put piggyback in a existing fuse / circuit just parallel to it.
So to get one of those you need to figure out what kind of fuse your car use, these are most likely "blade" type fuses called ATO fuses, but they come in a few different shapes. 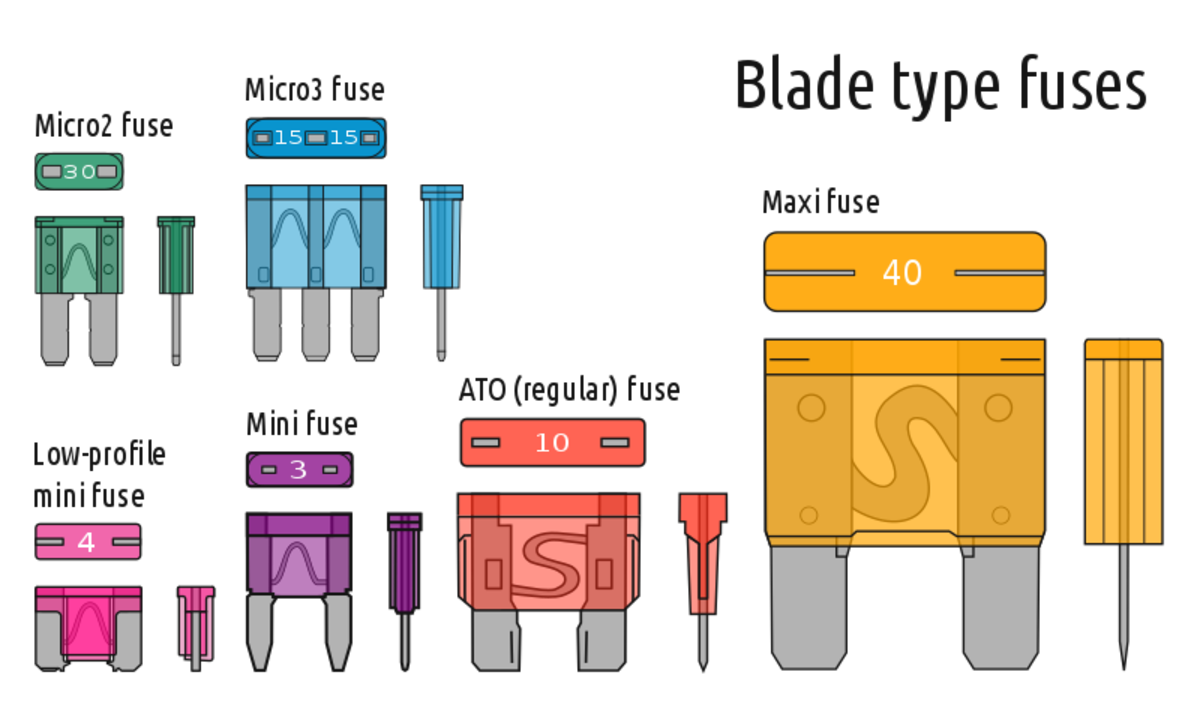 My personal Suzuki car use the mini type, one thing to tell them apart ( a few are pretty much same size ) is the 2 letgs, some are blunt point some are pointy.
Your car manual might say what fuese your car have, some times there are also a couple of spare ones in the fuse box you can bring to the store to get a add a fuse adapter.

The add a fuse adapters pretty much all look the same no matter what fuse they are fore, they generally look like this.

The fuse in the picture here is the new fuse for the camera, it go in what i call the top slot, for any dashcam a 5 A fuse will be fine.
The lower slot that is where the original fuse go you pulled out to be able to install the add a fuse adapter.
The little piece of wire is where you connect your new stuff ( +12 V )
When installed it look something like this in the fuse box. In general you want to tap into a higher AMP fuse, but the smallest ones are often 10 A and that will be fine.
What you have to be careful with is to not go for the "mission critical" fuses like the one for airbags and engine management ASO
Things like accessories - heated seats - cabin light . rear window defroster ASO are open game.
Some cars not least new ones have smart electrical circuits in which case installing a 3 wire hard wire kit to get parking guard can be tricky, this is due to the smarts in the wire harness, so a wire that appeared to be always on when you installed the camera are not that after all.
Good thing is the add a fuse adapter are fairly easy to move to a new fuse, just pull the original fuse out of it and put it back here it belong, then pull another fuse put that in the bottom slot off the add a fuse adapter and then put that in the new empty fuse location.

BUT as you just have the 2 wires to deal with, you just have to find and use a ACC fuse that is only on when the car is on, so the dashcam should turn off when you turn off the car, and likewise come on when you turn on the car.
Some circuits in newer cars can have a delay, like you maybe have seen cabin light or headlights being on for a little while after the owner have left & locked the car, so when you have done your install just be sure the camera go on / off as it should, if you are on a always on fuse the camera will be on always too, and that is no good with the provided power supply.

Too bad you are on the other side of the world, i am always available for people if they need help installing a dashcam, but that only go for within reasonable distance in Denmark

Of course you also need to figure out where your fuse box is in the car, that is normally in the manual / quick start guide for the car,,,,,, mine is in a horrible place, where you need to be a contortionist and i am a 55 YO stiff old SOB.

A mistake some make is to use a not suited bolt / screw for the -12 V GND connection, but usually there also is a factory GND connection point near the fuse box


Of course you can also spend money on the hard wire kit and not use the parking guard option, but then you just have 1 more wire to deal with and 1 more fuse to find and use.

PS: A cheap 12 V LED probe / circuit tester from the dollar store are nice to have, i use a dirt cheap one myself, newer cars need LED, older testers just had a regular bulb in them which was fine back then.

Amazing - thank you, I pretty much understand everything you wrote! I have a Toyota Hiace (van) which uses the low profile mini fuses.

Will purchase the camera and might be back for installation advice but your answer makes complete sense at this point.

If there is issues finding the right fuse the SG boss jokiin have a tech to ask, but he have been out on medical leave for a while, but we are all hoping to have him back soon.
If there are problems we also have the other resellers of the SG products that can fill in, but the boss generally handle Oceania questions himself.

Have no fear we will get you up and running with your SG product.