I've had my 0906 for almost 2 years now. I'm embarrassed to say I've had my hard wire kit almost as long. I go to my car a couple of mornings ago, and this is what I found. It gets even worse. We have an Austin PD officer that lives in this apartment complex. He was out that morning walking his dog around 6:30am adjacent to where my car is parked and he did not notice the damage then. If this is correct, the incident would have taken place in BROAD DAYLIGHT, between then and 11am, when I went to my car. He thinks the damage came from a pipe of some kind. It sure looks like it, but only if it came from an angle (as if someone was standing on the hood holding the pipe). No cameras on the property, and this old Crown Vic does not have comprehensive insurance (I don't think it would have made a difference either way because of the deductible).

Don't be like me. This will be about a $250 lesson in procrastination.

To me that more look like a round object hitting the windscreen, if i had to guess i would say a bowling ball or at least a sizeable stone
Had it been a steel pipe i would expect a less uniform damage pattern
This is the pattern left on a police car after a maniac vandalized several of those with a pipe, as you can see in the middle the initial point of impact seem to be on the left side and then the down to the right angle of damage i would take as the guy have been a lefty and so standing on the left side ( right in photo ) of the car as he hit it, but it could also be 2 hits in almost the same place.
Your damage look nothing like that. 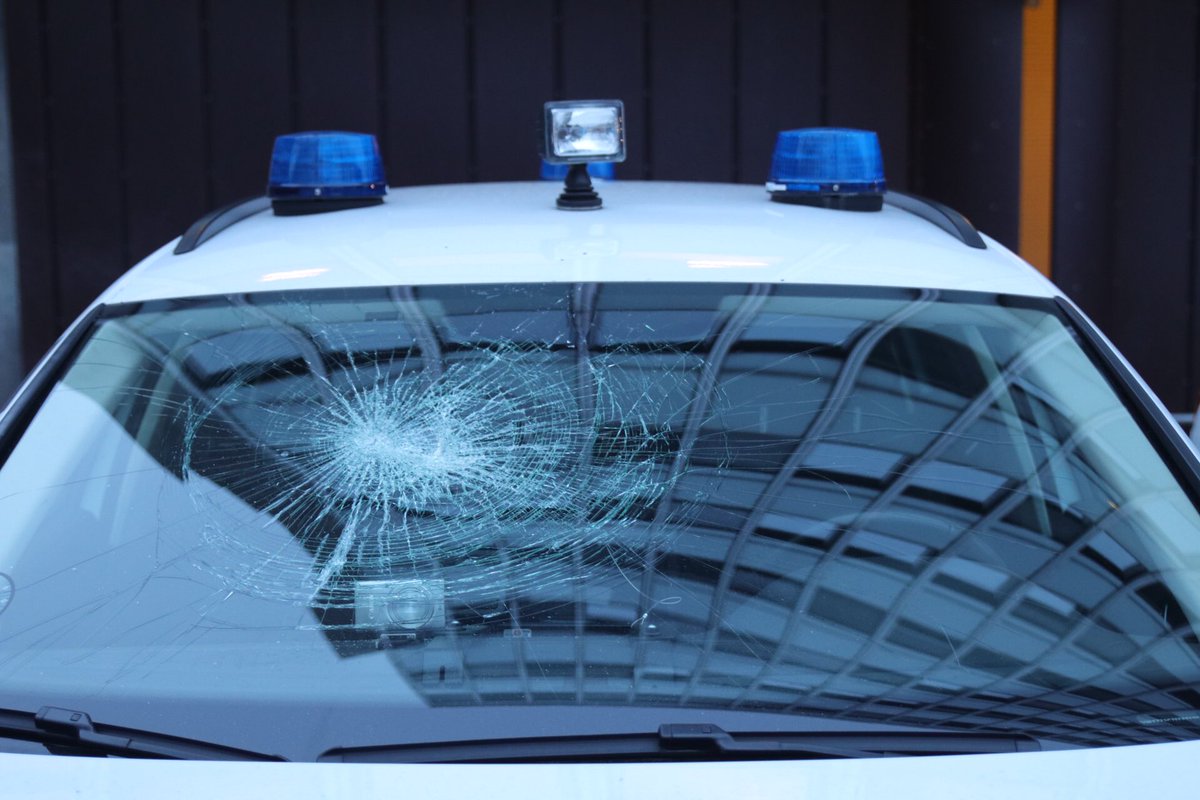 It would well be a butt hurt person throwing something at your windscreen due to your dashcam, at least this is one reason why i focus so much on stealth.
Also a creep like that would probably prefer to do his deed from a far, VS being right up close to his victim.

Is that a footprint on the right in front of the steering wheel ?
seem to be something there and some dirt.
But if someone jumped onto your hood and kicked / stomped your windscreen, i would expect to see dents in the hood or at least footprints.

I assume if you used the heel of your foot you could also make a break pattern like that as the soft rubber sole flatted some upon impact.

That round almost unbroken part in the middle of your break is what confuse me.

Are you parked curbside or in a lot ?,,,, i would look for a sizeable roundish object maybe on the other side of that fence in the background.

What you say if you used like a 5" pipe and stood on the hood and rammed the end of the pipe into the windscreen i would also expect to see a pattern like you have, but then you should have dents in the hood and maybe scratches / footprints.

Punk bitches, may they rot in hell.
OP
D

kamkar1 said:
That round almost unbroken part in the middle of your break is what confuse me.
Click to expand...

Here's a view from the inside. You can see the adjacent apartment directly across from where I'm parked. There are balconies there that would be a prime spot for launching their missile attack. If that's where it came from, they got lucky on the first attempt. If they dropped something from the building my car is at, the damage would have included the hood I would think. I am confused as well, since the inner spot on there is almost completely undamaged. Hopefully you can zoom in and see it better. Also, that's not a footprint, it's a bird bomb that my washer fluid had trouble removing the day before the damage. I saw no evidence of hood damage.

Thanks for the replies, I'll be installing my hard wire kit this weekend.

I've got one quote so far, we'll see what happens. Yes, may they rot in hell.

The windshield has been replaced for $240. The tech thinks it may have been a softball that caused the damage. If so, then it was more than likely intentional (in my opinion). There are no fields anywhere nearby. The tech thinks that it is possible for someone to hurl a softball hard enough to do this as well. Who knows.
I'm going to park my car in a spot right in front of my unit until we move out because of this. And install my hard wire kit like I should have done last year.

I hope you have taken the opportunity to mount your camera a bit higher / more discreet.
You might also put a CCTV camera on your car, after all the in car camera have its shortcomings on a limited power supply and behind the glass that depending on location can be obscured by things like dew - rain - snow ASO.

The camera i have on my car are a PTZ, so i can pan Tilt and have 20 X optical Zoom, this useful as i don't always park in the exact same place + i am zoomed in to just have my car and immediate surroundings in the frame.
And i have other cameras too covering the street in front of the block and in the peep hole in my door.


Also the camera have IR light, which are important as the back yard are pitch black at night.

DealerMan said:
I've had my 0906 for almost 2 years now. I'm embarrassed to say I've had my hard wire kit almost as long.
Click to expand...

It took me a while to realise that you have had the hardwire kit for 2 years, but not installed it.

Sometimes strange things can happen and you'll be glad you had a camera running in parking mode, just in case.

Maybe it was a fish?

Dashmellow said:
Maybe it was a fish?
Click to expand...

LMAO If only it had been! At least I could have made a meal out of it!

edit: Yes, I didn't make it clear in the original post that I had not installed the hard wire kit. Sadness & gloom were dominating my brain.
Last edited: Jan 11, 2020
A

I have had a number of widshields smashed by vandals over the years but the video attache was my Bonnet (Hood) coming up at 70mph just got out of a speed restricted area (50mph) and bang, camera went flying around the car interior.

Damn. I'll assume you were able to pull over/stop without further incident. I've seen enough YT videos with hoods flying up like that, and while it may look funny to see it happen, there's absolutely nothing funny about it.
A

DealerMan said:
Damn. I'll assume you were able to pull over/stop without further incident. I've seen enough YT videos with hoods flying up like that, and while it may look funny to see it happen, there's absolutely nothing funny about it.
Click to expand...

Yes I stopped safely and pushed the bonnet (Hood) down and surprisingly it locked down although very mangled, screen was smashed, being over 30 miles from home I needed to take the back roads where possible to avoid the law, its an offence in the UK to drive with a broken screen, got to within 2 miles from home and noticed a traffic police car they had pulled someone over, fortunately for me I was able to take a right and follow a parrallel route and avoid the police. Next day mobile windscreen fitter arrived to replace, although the roof was damaged the window frame area was OK and new screen fitted.

any-mgzt said:
the video attache was my Bonnet (Hood) coming up at 70mph just got out of a speed restricted area (50mph) and bang, camera went flying around the car interior.
Click to expand...

have had that happen once, not a nice experience

Should be a rule that the hinges must be at the front, like with side doors!
Then if the bonnet comes up, you just slow down a little and it goes back down.

DealerMan said:
The windshield has been replaced for $240.
Click to expand...

I paid half that amount for my Honda ($120) installed last year. I also live in the most expensive part of the country too. I'm guessing the windshield glass is like $50 and the rest is labor.
A

Here in the UK, if you have full insurance cover, replacement screens are fitted free and the fitting company bill your insurers. There are 3 levels of cover here, 3rd party only, 3rd party + fire and theft, and fully comprehensive.

In every car I own, I look around the see how I'll determine my lane position if this happens, which luckily hasn't been needed yet. Glad it wasn't worse here!