Yes, I was just collecting the 60fps footage and didn't have a need for any freeze frame shots. The video looked smoother so I stuck with it. When I did need a freeze frame I found they all had motion blur.

Going back through my archive, all the 60fps suffered this and firmware 2.00 was worse than 1.03 even at 30fps.

The info I got was that whilst HDR has a On or Off setting it's more like low and high so never really off and that may be the motion blur issue. I think 1.03 didn't have HDR but had WDR and that was maybe fully off.

I now need to do some driving in good light to fully assess vvs against l.03. My first impression with vvs is that it maybe is a touch darker and I will set EV to + 1/3 for a test before testing 1.03 again.

I have lowered the angle very slightly as I think I'm showing too much sky.

This won't be quick but worth doing.
C

Sample was recorded during daylight in unfavorable light conditions under a heavy overcast. The clip starts in especially difficult (downright dark) conditions under tree cover. The camera increases brightness by a lot and tries to make the most of it. Not surprisingly, number plates of oncoming traffic at 80 km/h are impossible to read. And the top of almost my entire dashboard shows up in the windscreen (I was in doubt if I needed a CPL filter, but not anymore…)

Once in the open, number plates of oncoming cars become readable. Brightness is still increased considerably.

Given the difficult light circumstances, I am satisfied about the results.
Last edited: Aug 21, 2021

It'll be interesting to see HDR On and EV -1/3. Does an EV of minus make it darker? Looking at mine, compared with 1.03, I considered setting mine to + 1/3 to brighten it up a bit.

Now to find something that will play .TS

I use .MP4 because I'ts more compatible with players.

Potplayer does .ts too. A better choice if you've got a low-performance computer.

I like Media Player Classic - BE (MPC-BE). It is freeware / donation ware, light on resources and plays TS, MP4 and many more.
It has convenient buttons for 1 frame forward / skip to next and previous file.

I've already got that installed

Tip : On your download link, if you change the final 'dl=0' to 'dl=1' then we get the save dialogue rather than having to navigate through DropBox.

There is some motion blur at 83kph / 50mph so your next test is HDR Off
Do you have a CPL fitted as there is some dash reflection. I'm guessing without a CPL then -1/3 EV is valid and why my EV 0 is darker.

I think this shows motion blur and reflection :

I've found a' VVS Mod 205' trip I did in good light. I think I'll stay at EV 0 for further testing. This shot is only at 30mph/48kph but has little motion blur: 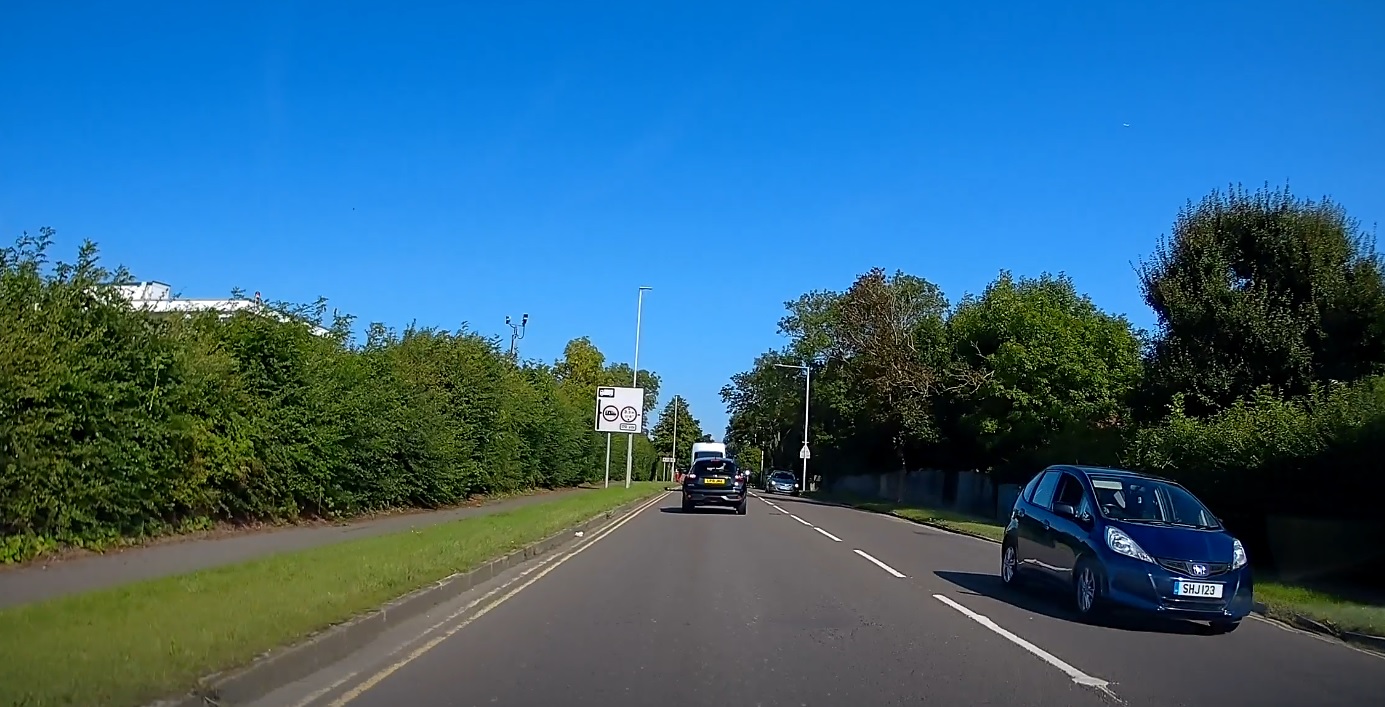 Thanks for your remarks. There is always some dashboard reflection in my recordings, but in this clip it's really bad. I don't have a CPL filter yet, will order one next week. Another argument for a filter that I haven't read here is lens protection against scratches.

I'll try HDR off + EV 0 next. That's what I used in the official Viofo FW versions.

(I've changed the download link, thx for the tip).

Cirrus said:
Sample was recorded during daylight in unfavorable light conditions under a heavy overcast.
Click to expand...

You have a lot of sky and little road
Under this condition, a better resolution of 21: 9
CPL needs to be set!
And you don't need to use the old TS format

I've probably got too much sky as well but I found showing too much dash also seems to darken it as well.

I have plenty of parameters to test = this may take a while.
C

Thanks @vvs49 , for your useful remarks!

What are the Advantages of 21:9 Aspect Ratio?​

For dashcam video, it can avoid wasting storage space by not recording your dashboard and clouds high in the sky, allowing more video to fit on the memory card before looping and giving longer memory card lifetime. If recording at the same bitrate then it allows more bits to be used for recording the road and so gives improved image quality.

Since sky tends to be very bright and the dashboard is often very dark, not recording these allows for an improved exposure range for the recorded image which can then give an improved image quality experience when viewed.
Click to expand...

I just did some reading about TS and MP4. I didn't realize that TS is older and uses more data for the same video length.

In the meantime one more sample clip from yesterday evening (dusky conditions and HDR off).

I think <<HDR off>> produces video with a more realistic level of brightness (well, duskiness in above clip ).
Last edited: Aug 22, 2021
S

.ts has the advantage of files not being corrupted from improper file closing. It may lose the last second or so of a file if the shut-down process is interrupted but the rest will be readable. There are methods which usually repair files corrupted in a crash which interrupts shutdown, so I'm not sure that the .ts advantage is worth the loss of compression and card-time. I do like that you can choose to use if if you want to

I like that one. Out in the open instead of the tree tunnel of the previous clip.

HDR off does seem to have improved the motion blur.

I'll give 21:9 a go on my next test. Must remember to go out and change it in the morning and realign the lens.

I'm not out till Wednesday, back Sat or Sun so will be a week.

SawMaster said:
.ts has the advantage of files not being corrupted from improper file closing.
Click to expand...

How can you close a file incorrectly?
I tried to mess up the file, it didn't work.
Only in one case, this is when you pull out the card while recording !!
The TS extension is a compressed MPEG-TV video file. Video and audio data is stored in MPEG-2 multimedia format
S

If a dashcam has a faulty battery or supercaps when the power is dropped as can happen in a crash, the last file is often corrupted and needs repair before it can be played. Sometimes the jolt of a crash impact will cause a momentary loss of connection to the card causing the same problem. Same if a card is ejected during recording.

The usual file formats such as .avi, .mpeg, .mov, and so on require conversion from .ts used in the processor to them when writing to the card, and the file closing script is necessary to make them viewable. This is why dashcams have a battery or supercaps to provide power for long enough to write that script and close the file correctly. .ts does not need opening and closing scripts or language conversion in the cam, so then you don't need either supercaps or a battery in the cam. IIRC B4K and B2K (or at least one of them) functions this way; no caps and no battery needed because it uses only .ts

The .TS files I've downloaded in this thread have both opened and played in Windows standard media player which surprised me.

I'm sure I read ages ago that .ts can be more easily terminated incorrectly. I'll stick with .MP4 as it works for me.

Cirrus said:
Thanks @vvs49 , for your useful remarks!

I just did some reading about TS and MP4. I didn't realize that TS is older and uses more data for the same video length.

In the meantime one more sample clip from yesterday evening (dusky conditions and HDR off).

I think <<HDR off>> produces video with a more realistic level of brightness (well, duskiness in above clip ).
Click to expand...

The 2.5 mod worked well whilst driving however it failed to record whilst parked (I am using the official HK3 which has always worked perfectly for over a year with parking mode). I tried many iterations of settings and the only setting that worked was to use "High Sensitivity" on Parking Movement sensor, but this would not turn off and essentially just kept recording non-stop.

I gave up eventually and went back to 2.4 and everything works as advertised.
Last edited: Aug 27, 2021
W

interesting, 2.5 mod doesn't work with Parking Mode? I've bought the camera mostly for this purpose.
@vvs49: can you confirm or this is just an isolated case?

wolfyk said:
interesting, 2.5 mod doesn't work with Parking Mode? I've bought the camera mostly for this purpose.
@vvs49: can you confirm or this is just an isolated case?
Click to expand...