murcod said:
I just did another check of the 2nd modified firmware from Viofo and it's definitely a winner. No boosting required from 3rd party software to hear voices and the indicator operating etc.
Click to expand...

So I've been using the 2nd version and it's really good. One of the cars went in for a service and the camera picked up the in cabin conversations plus the voices of people standing close outside the car (talking to the driver through the open window.)
B

Not sure if this has been discussed before or is already known. But I noticed that when a bad memory card that is write-protected is used with the A119 V3 (on firmware version 2.2), the dashcam shows a Memory error warning for a few seconds before giving audio/visual warnings (beeping, REC button flashing in red). Is this a standard dashcam feature now these days? I find such a feature very useful and it's now on my requirements list whenever shopping for a new dashcam.

I know such a feature was definitely not on the A118C as I had several instances with this dashcam where memory cards became write-protected without me ever knowing about it and of course the dashcam was never recording anything. I only found out about the memory card issue months after it occurred.

Yes a audio warning upon record faliure are now very common, the old cameras would just sit there and look as if they was recording, so this is very good news in modern cameras.
S

Not in all cams yet, but most of the better ones will have this feature now. It's still good practice to check the card regularly, at least every couple months.

Viofo was the first dashcam in the world with audio warning.
They also introducing the flashing LED for failures because of:
1. A flashing LED will catch the driver attention. Look at the car dashboard: when a light is flashing something is wrong.
2. A continuous LED will not disturb the driver. Why to drive hours and hours with a red blinking LED in the front of your eyes?
The blinking LED was invented to tell the cameraman that the camera is recording and to not waste the camera tape or battery by mistake. For dashcam is not needed such idea because the power is always and the recording is on loop.

These two small ideas but very clever and important were invented by some smart guy.

Is just a guess but maybe this feature was implemented on Viofo A119 because of Viofo request. Because at that time no chinese dashcam had it and I am very very sure that Viofo wanted and maybe requested it. Compared to Ambarella I know that Novatek is listening their clients and implementing some requests. For sure you had some requests or fixes raised to Novatek and they implemented them.

I didn't knew about audio warning on korean dashcam even I had two korean brands 6-7 years ago and reading this forum daily.

I requested audible notifications in 2014 (there were Korean cameras doing spoken warnings back then) but even beeps was a step up from no sound at all, it wasn't possible on the earlier chipset but was told we could have it on the upcoming chipset, when we started on the SG9663DC in 2015 it was available, was a quite while before we released and could actually take advantage of the function as there were other things that needed sorting to get the product stable before release, lead times are like that though so part of the process we have to go through, you're right that there are many that don't implement this function today even though it is available to all, some brands just don't get it I guess, their loss


Mtz said:
I didn't knew about audio warning on korean dashcam even I had two korean brands 6-7 years ago and reading this forum daily.
Click to expand...

there were more than 300 Korean brands doing dashcams back then, majority never sold outside of the Korean domestic market so really only maybe 4 or 5 brands that were exporting at that time, not a lot more than that still do business outside of Korea, they're way past the saturation point in their home market so I suspect quite a lot of the smaller players there that never found an export partner no longer exist

gse said:
When the recorder is turned on, a red line is displayed on the screen for more precise adjustment of the horizon and correct exposure.
Line is displayed for 30 seconds, no video is recorded and corresponds to the horizon 50% -50% (sky / road)
Setting the horizon:
If possible, select a long open section of road, look at the recorder screen by tilting the DVR head and comparing the visible horizon to the red line on the DVR screen.
Click to expand...

Don't you want the sky to only take up the top 1/3 of the image? That way, any center-weighted metering will be looking at the road, not the sky.

Just got back from my weekly trip.

Viofo support are absolutely correct ...... going back to firmware 1.03 has returned my freeze frame back to fairly sharp.

This example is in fairly dark conditions and at 56mph, not my usual 50mph and it's better than anything I've captured under 2.0 : 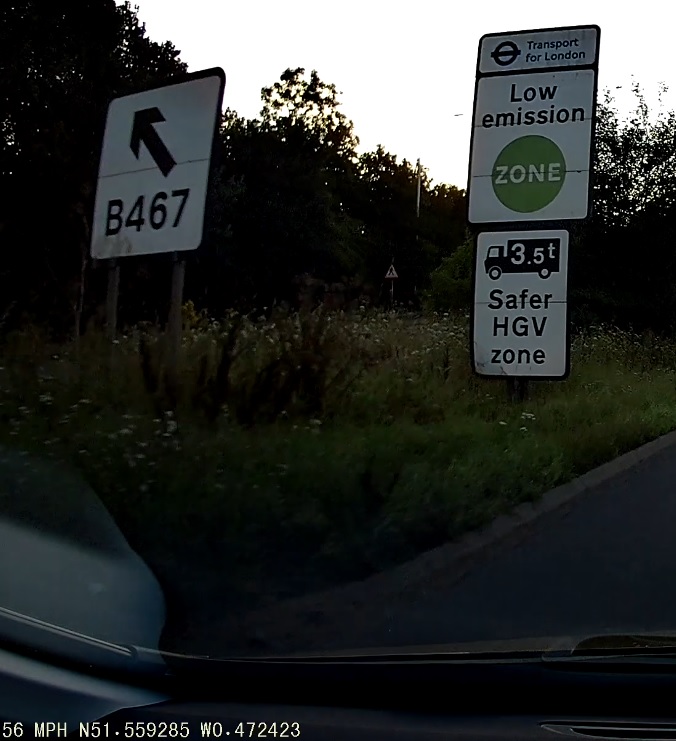 I'm going to load VVS firmware for next week and see how sharp that is.
M

Kremmen said:
Viofo support are absolutely correct ...... going back to firmware 1.03 has returned my freeze frame back to fairly sharp.
Click to expand...

I've noticed they're not very sharp on mine with the later software. Like they're running too slow an exposure speed on each frame.

It'll be a while because I only travel weekends.
M

murcod said:
Well, I'm liking the latest firmware with the mic gain turned up. I've only tried it out in the quieter/ softer riding vehicle and even with the audio system cranked right up there's no distortion. It picks up the in cabin noises better eg. indicators operating etc.
Click to expand...

So this improved audio came in use recently. My new car was in for a service and one of the Service Techs decided to go out for a thrash in it. You could probably call it drag racing given he seemed to be chasing down another speeding vehicle. The voices can be clearly heard which of course helps identify who was driving.

The vehicle's audible speed warning can be heard going off multiple times (set to activate 3km/h over the limit.) The engine being revved out in each gear, the audible impact as he mounted the yellow concrete lane dividers to cut a tight corner. This is a major vehicle manufacturer's offical service centre!

I'd be straight back there demanding a full refund and extended warranty in case anything unexpected happened. And contact the brand HQ.
M

Kremmen said:
I'd be straight back there demanding a full refund and extended warranty in case anything unexpected happened. And contact the brand HQ.
Click to expand...

I'm after service refund (they've already said they'll do that), $75 towards a wheel alignment (drove at speed over concrete lane dividers) and a 12mth extension to the drive train warranty. The Service Manager's response was very disappointing- almost downplaying the situation. It involved speeds way above the limit and apparent "drag racing" - trying to catch up to another vehicle that flew past. The Australian branch of the (large) corporation aren't helping me at all - "franchised dealers so any compensation is up to the Dealer Principal". So I'm pursuing multiple avenues.

The Police were handed the video footage this morning, the Service Manager of course refused to tell who was driving. I can't wait for the Police to call him/ turn up at the dealership!
S


Just purchased viofo A119 V3 and got little bit confused when I read this from blackboxmycar.com regarding viofo-3-wire-hardwire-kit setup:


So the parking mode will not work properly if cable is attached to GPS mount?

The idea to use the GPS mount connector was for situations when you want to quickly remove the camera from windshield. And these situations are when using original charger or when not using Parking mode.

But when using Parking mode you will not remove the camera so often so the best advice for parking mode situation is to power it directly and not through the GPS mount. In this way you will avoid the mount to be stressed by power + heat.
N

Will the GPS module work while driving with power connected directly to the camera?

Nordi said:
Will the GPS module work while driving with power connected directly to the camera?
Click to expand...