Viofo A129 Pro Dual Dashcam - 4K Front + 1080 Rear
The dash camera we have been waiting for, a 4K version of our favorite A129 Duo that records real 4K at a decent bitrate, and works at night!

There are a few people with early versions of this camera now, so here is a thread to post your videos and frame grabs on...

Overview
This is a high resolution version of the A129 Duo, most of the features are identical, and it looks identical. The exceptions being:
The sensor and new lens are the same ones used in the new Gitup F1C capacitor based action camera, hence the two cameras being released at about the same time. Performance however is a bit different since the F1C maintains the Ambarella processor from the F1, while the A129 Pro brings a new and improved version of the Novatek processor.

Daytime performance is excellent with good dynamic range, excellent exposure and high bitrates. While some 4K dashcams only use 1080 bitrates for their 4K, the A129 Pro can actually use 4x the bitrate of the A129 Duo, which makes sense as it has 4x the number of pixels. Lower bitrates are available for if you don't want to fill the memory card too fast. It can also provide H265 encoding, which may improve image quality a little if you do select a lower bitrate and aren't driving under trees. H265 can mean difficulties on playback since many devices will struggle with high bitrate 4K encoded in H265, the normal H264 is of course available and is the default.

When it comes to dark performance where we expect a 4K camera to perform poorly, while the Sony IMX317 isn't actually a STARVIS sensor like in the A129 Duo, it is quite close in dark performance. At times there is a bit more motion blur than with the A129 Duo, but not always, and if you are driving straight then the extra resolution results in more number plates being read than on the Duo, even at night, sometimes it actually wins on the motion blur against both the A129 Duo and A119 V3.

The 5GHz Wi-Fi is significantly faster than that on the A129 Duo, typical transfer rates being around 10 MBytes per second while the Duo often only manages 1-2 MByte per second depending on the device it is talking to. Of course it needs to be faster due to the size of the 4K video so it is still not exactly rapid! It is still faster to put the microSD card in a high speed card reader if you want to copy the files off, but it will keep up with playing the 4K video files without stutter, assuming that your phone/tablet/computer can also manage!

4K dash cameras are known for overheating in hot weather, especially when used for parking mode inside a roasting car at mid summer. I live in the UK, so my testing has been limited to UK weather, nothing extreme. So far I have encountered no heat related problems other than it feeling a bit warm on sunny days. Best not to touch the metal of the USB ports but otherwise no problems. We will have to wait for reports from hotter places for a conclusion, but I do expect it to do a lot better than some of the competition which have been having issues...

Notes
If you view your video on a 1080 monitor, you need to make sure you use a video player or dashcam viewer that has a good zoom feature, otherwise you will not see the 4K detail! Even if you have a 4K monitor, the zoom feature is still highly desirable.

If you live somewhere hot then it may be worth looking for a memory card that can handle high temperatures since the card is quite likely to have temperature problems before the camera.

I've been using a Viofo 128GB MLC microSD memory card which has proven 100% reliable so far and has excellent performance. Maybe one of the best cards available since the "extreme" cards from the big brand names such as Sandisk are not using MLC memory and may not have the lifetime of real MLC.

Viofo has supplied pre-release versions of the A129 Pro to some forum members for test purposes, and probably also publicity purposes. The release version may have differences to what has been posted on the early part of this thread, hopefully improvements resulting from the testing. Link:

Unboxing Video (Paul Iddon)
Link: What the A129 Pro (4K Dashcam will look like)

New lens, the only part of the A129 Pro that looks different to the A129 Duo: 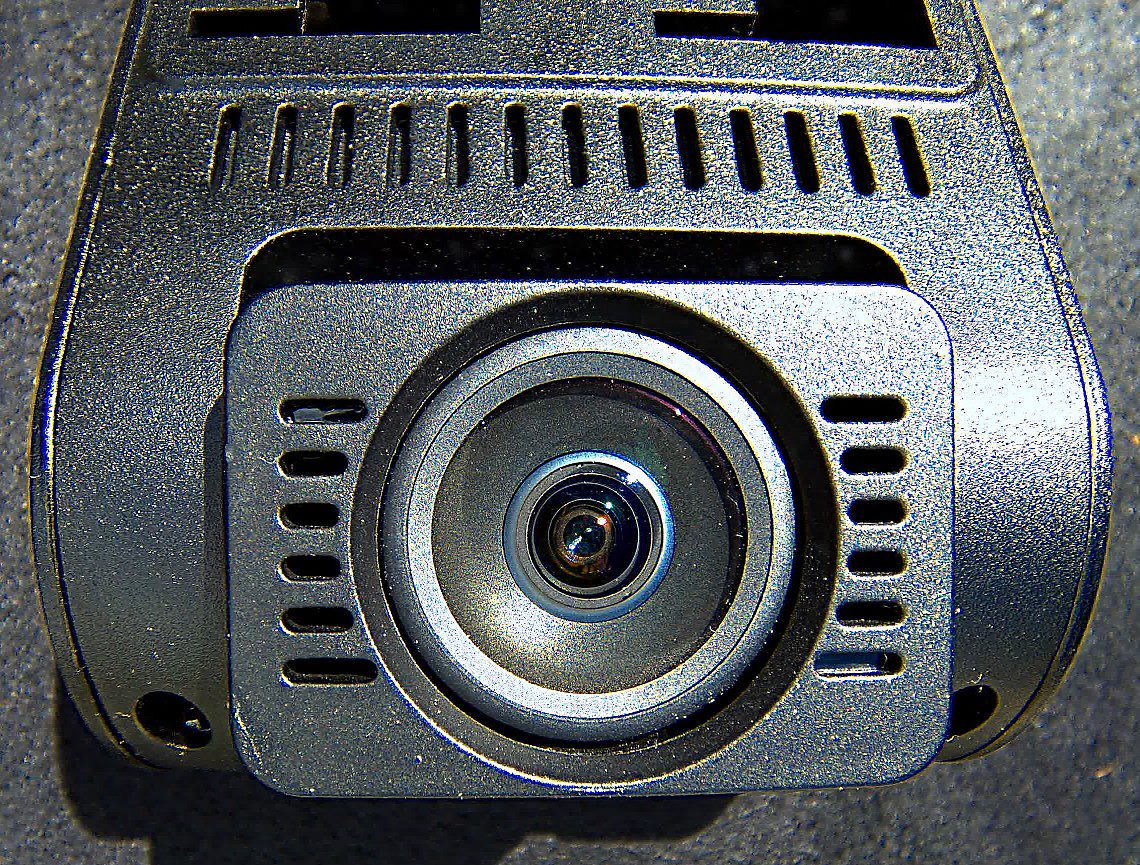 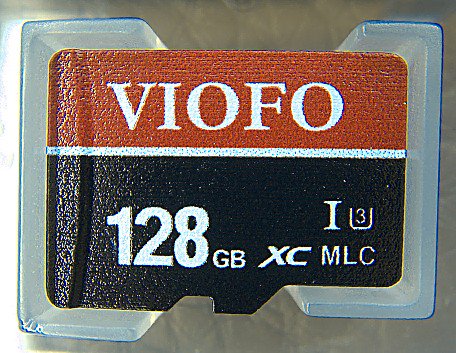 Difference in resolution between Viofo A129 Duo, A119 V3 & A129 Pro, also shows the field of view differences: 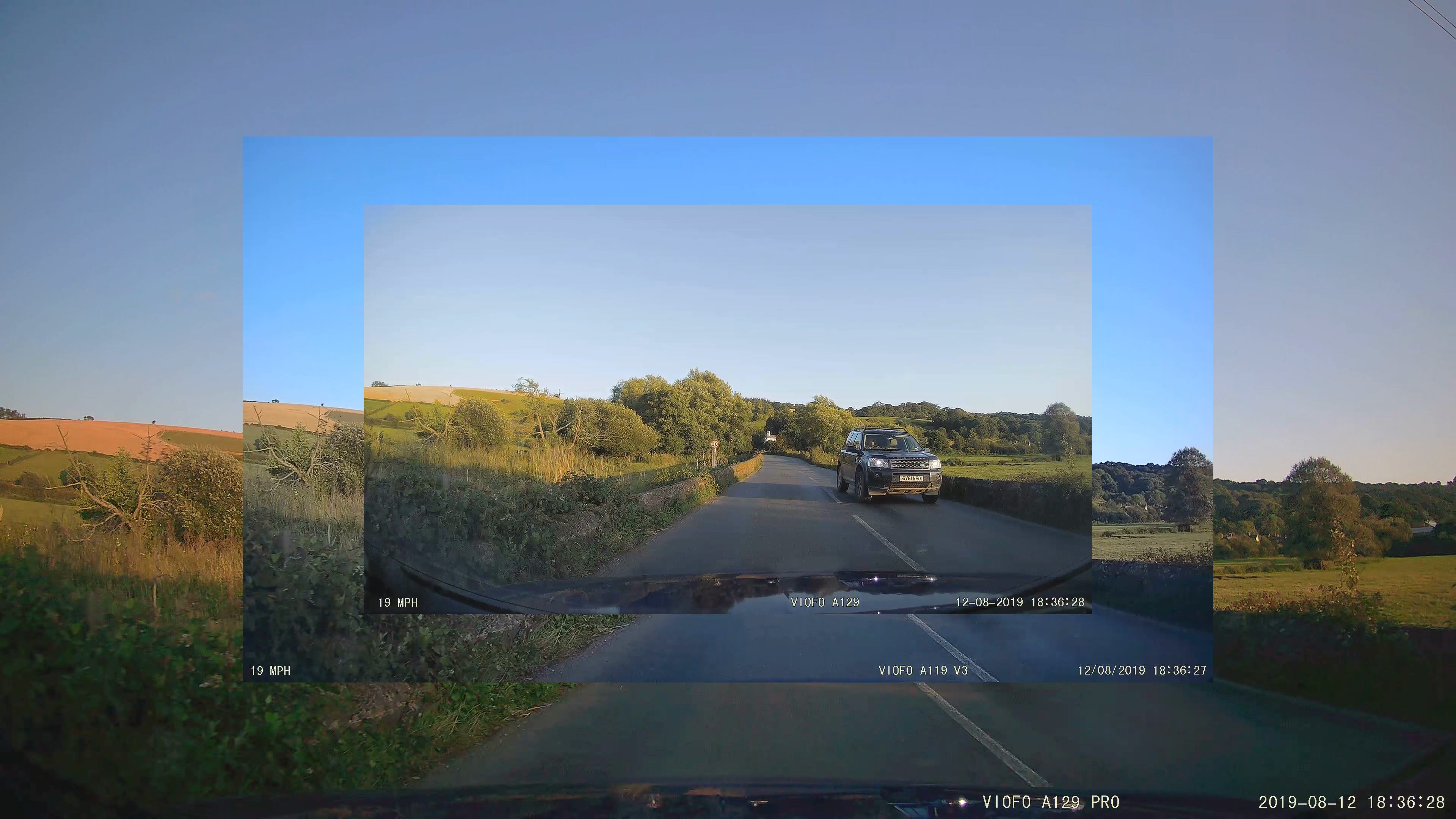 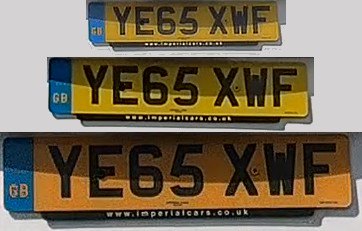 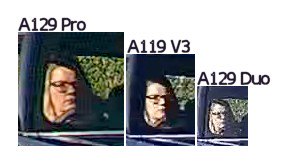 Summary:
A129 Pro has the widest field of view and still has the most detail when zoomed in to the same size, plus whenever you see a face, the A129 Pro has much better shading & colour due to the much higher bitrate, on the other cameras it is easy for faces to be compressed out of existence.
Last edited: Aug 14, 2019
OP

A few frame grabs (Single frame taken from the video and saved as a jpg photo):
Recorded in H264 at 59 Mb/s 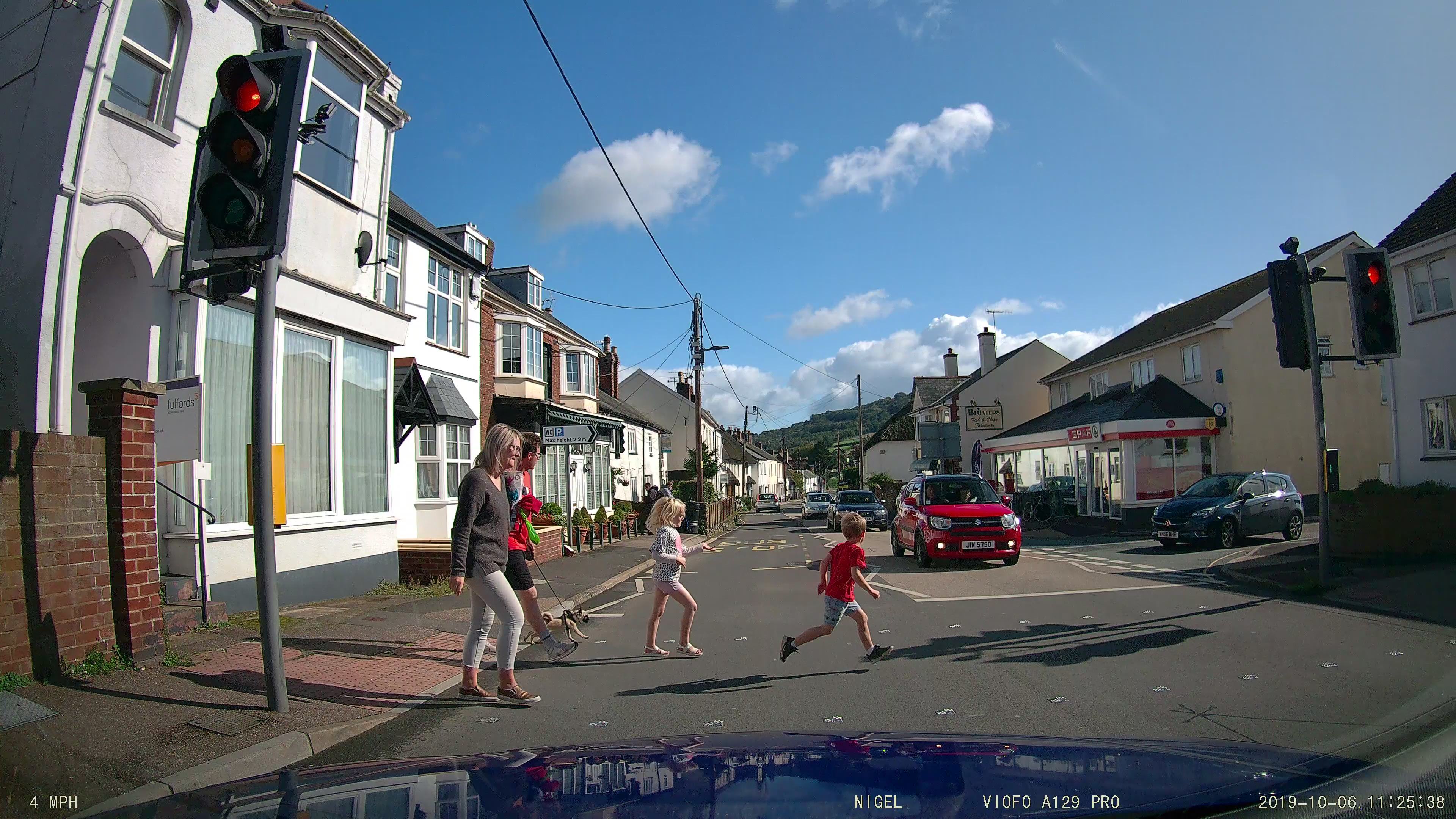 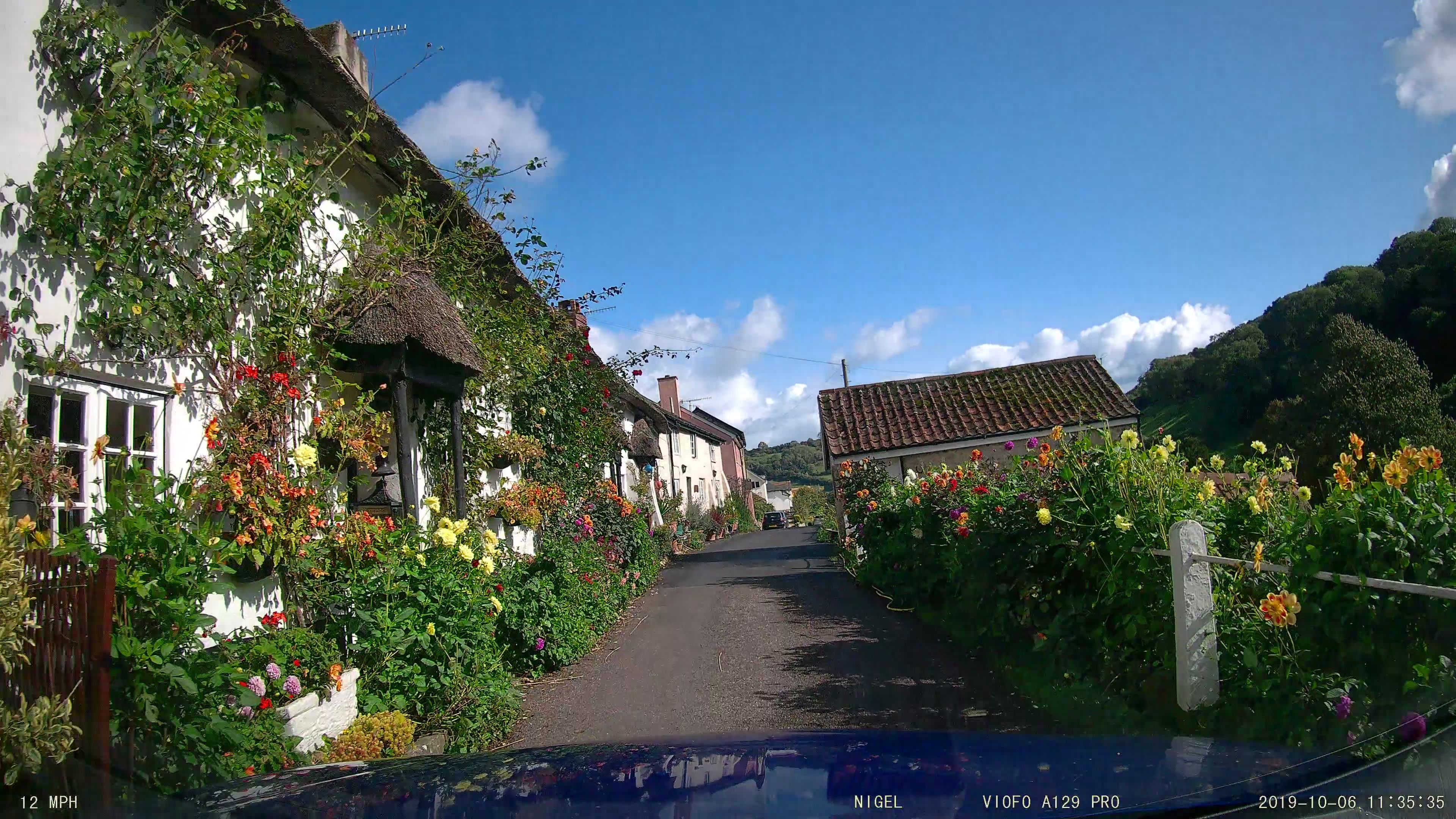 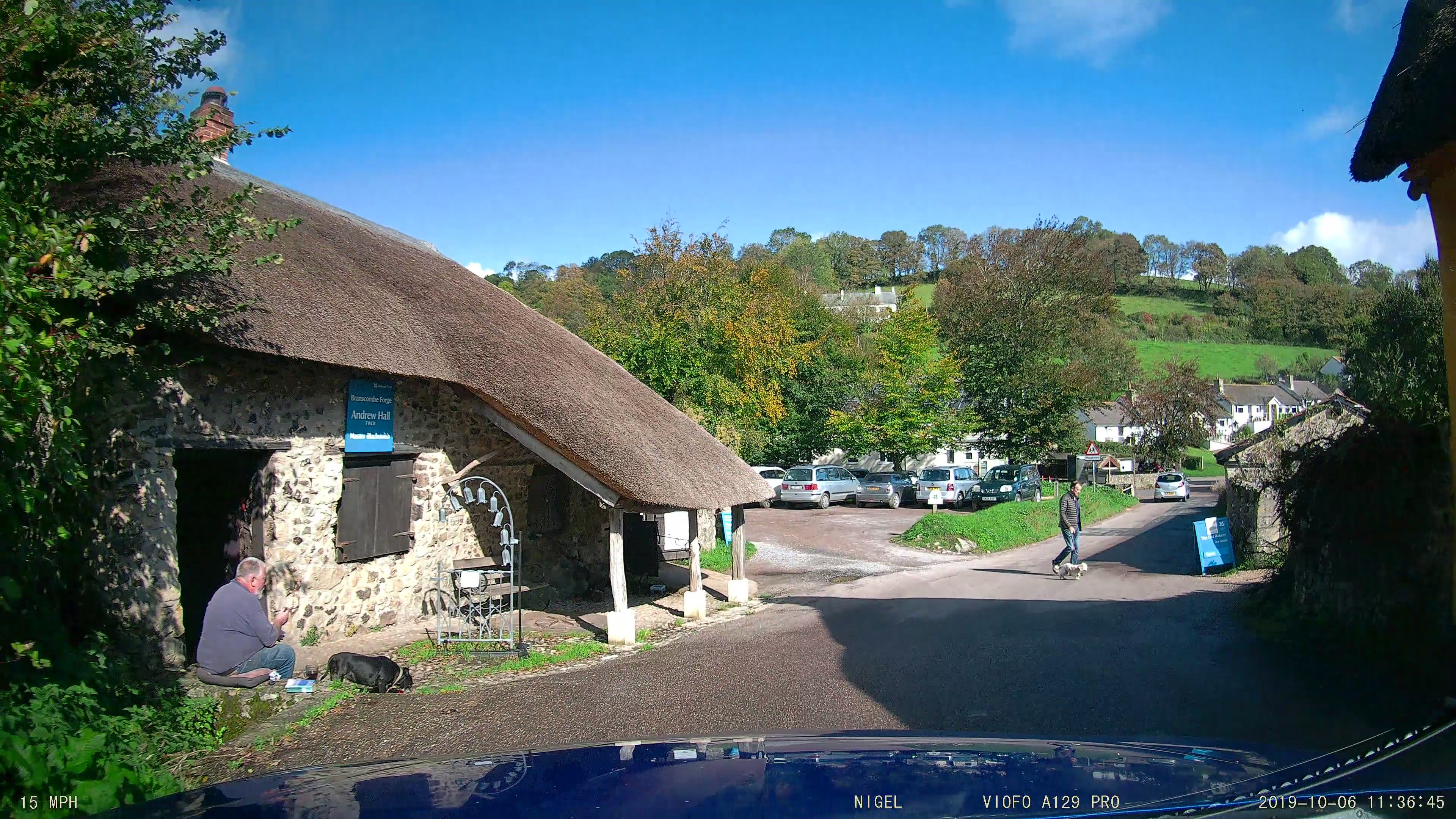 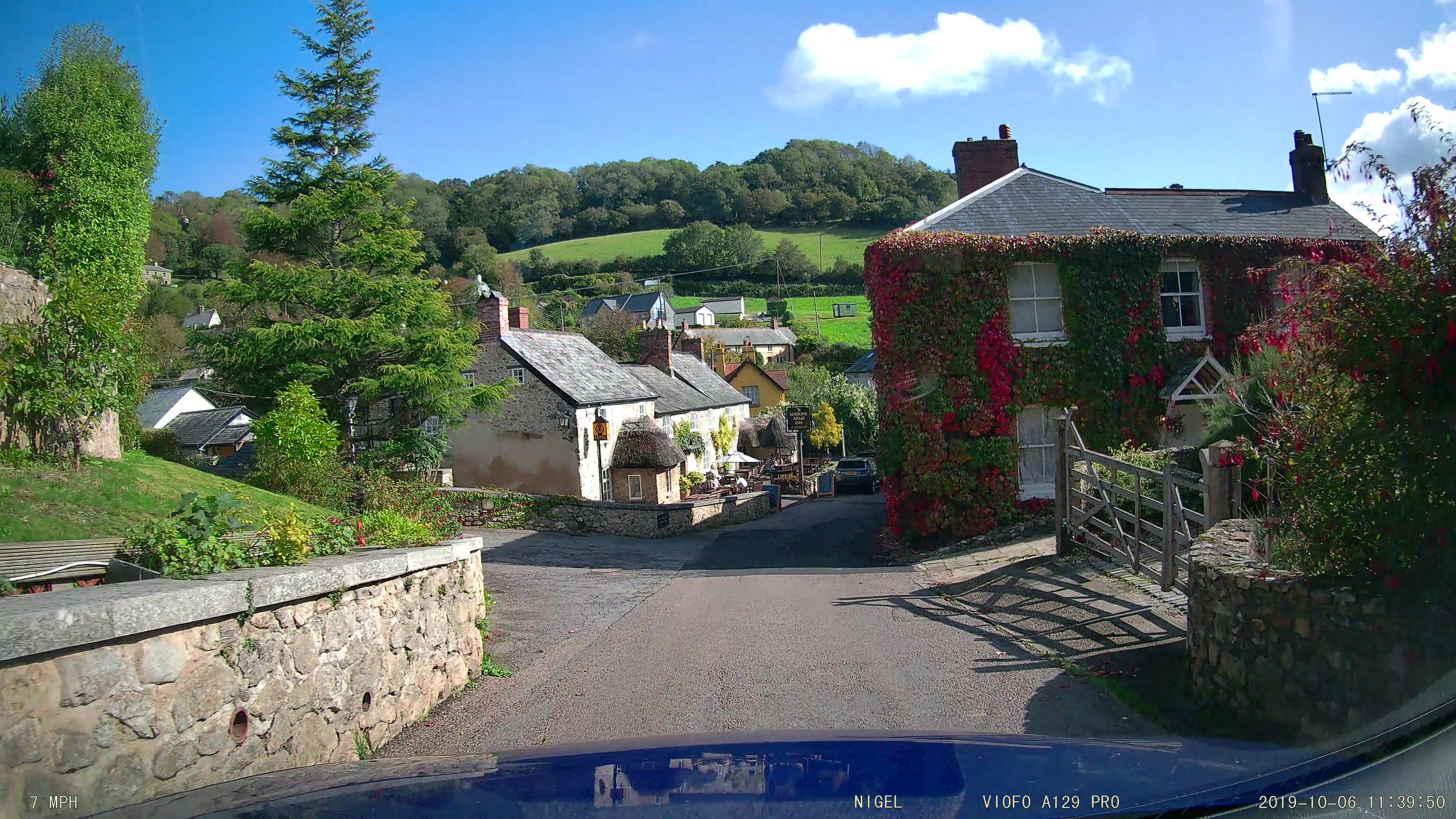 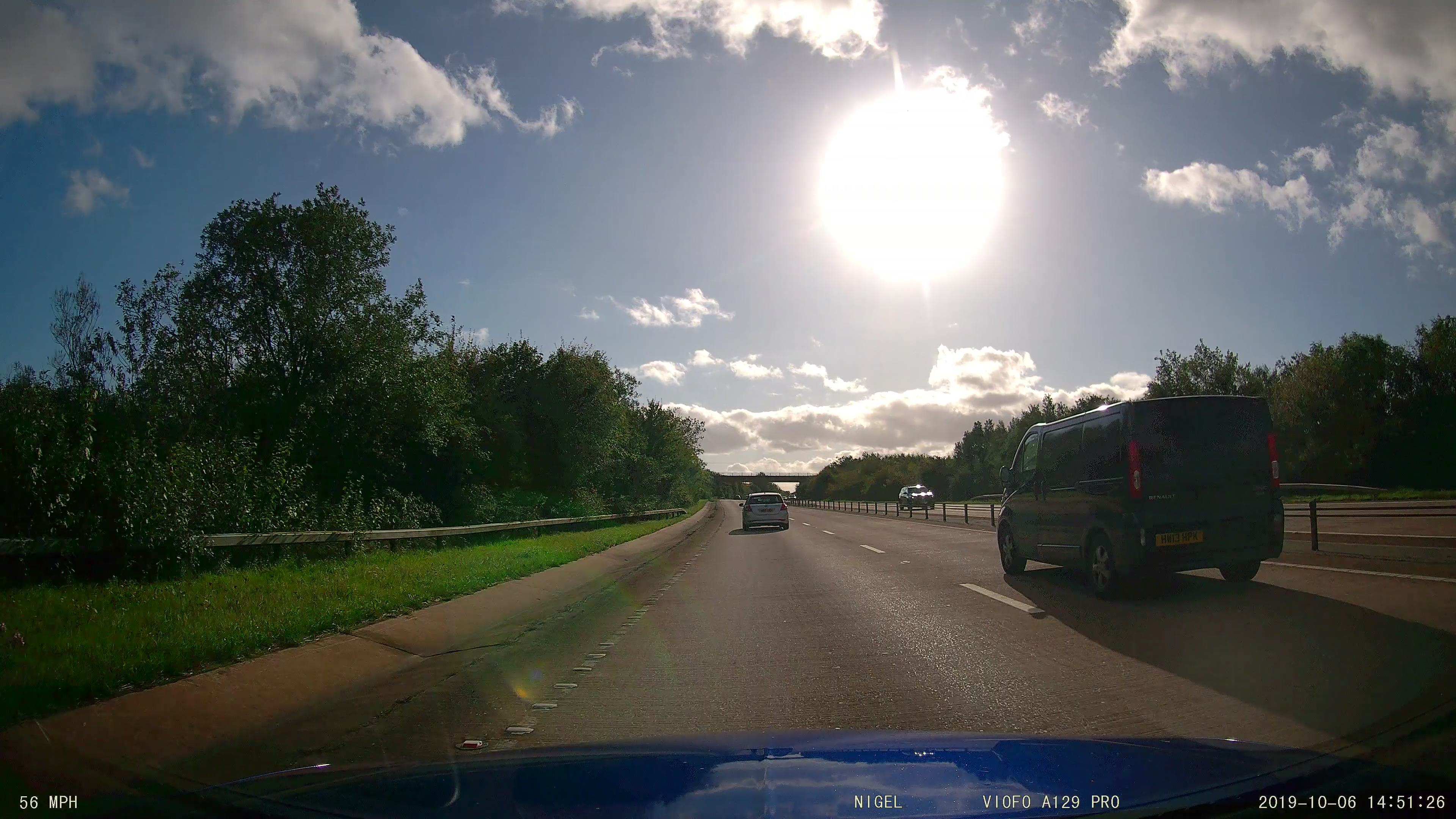 Thanks for the infos
OP

Night time example (9:15 PM BST), with a train passing at around 65MPH (110 Km/h), on this occasion the A129 Pro actually had less motion blur than both the A129 Duo and A119 V3, it also has the best microphone of the three (turn the volume up to hear that test, videos start at the same time for the microphone sensitivity comparison.):

When and where is it for sale? Will this bring the existing A129 down in price?

That is so cool
OP

Depends what bitrate you choose to use, although it is also a dual camera, and 128GB is what I like to use in the A129 Duo!

Currently I'm fairly happy with the H265 50Mb/s + 14Mb/s. Although at that setting is clearly not as high a quality is it could be, it does still catch the number plates very well, so for everyday use maybe that is all you need, for the holiday movies you might want a bit more.
OP

Airborne said:
That is so cool
Click to expand...

Yes, she had just driven past a "no right turn" sign, and then stopped in the yellow box which indicates "no stopping" while turning right!

Didn't get the number plate, but got the face

Airborne said:
When and where is it for sale? Will this bring the existing A129 down in price?
Click to expand...

Not yet, but will be in the usual places when available. Still under test. The other Duo might drop in time...

This is joining onto a motorway - not too sure what the Seat Leon was keeping such a low speed for though...

Paul Iddon said:
This is joining onto a motorway - not too sure what the Seat Leon was keeping such a low speed for though...

Nice clouds, good to have a dashcam that can manage clouds

It seems to be a trend these days to drive up the motorway slip road at only 30 or 40! I've got into the habit of going even slower, dropping back and then flooring it so I can join at motorway speed.

Paul Iddon said:
This is joining onto a motorway - not too sure what the Seat Leon was keeping such a low speed for though...

Just in time for the holidays
R

Pretty impressive. Can't wait to buy one. @Nigel, do you have any full dark clips to share?

Also, with the increased power consumption, how much time will it record in parking mode connected to the car battery? 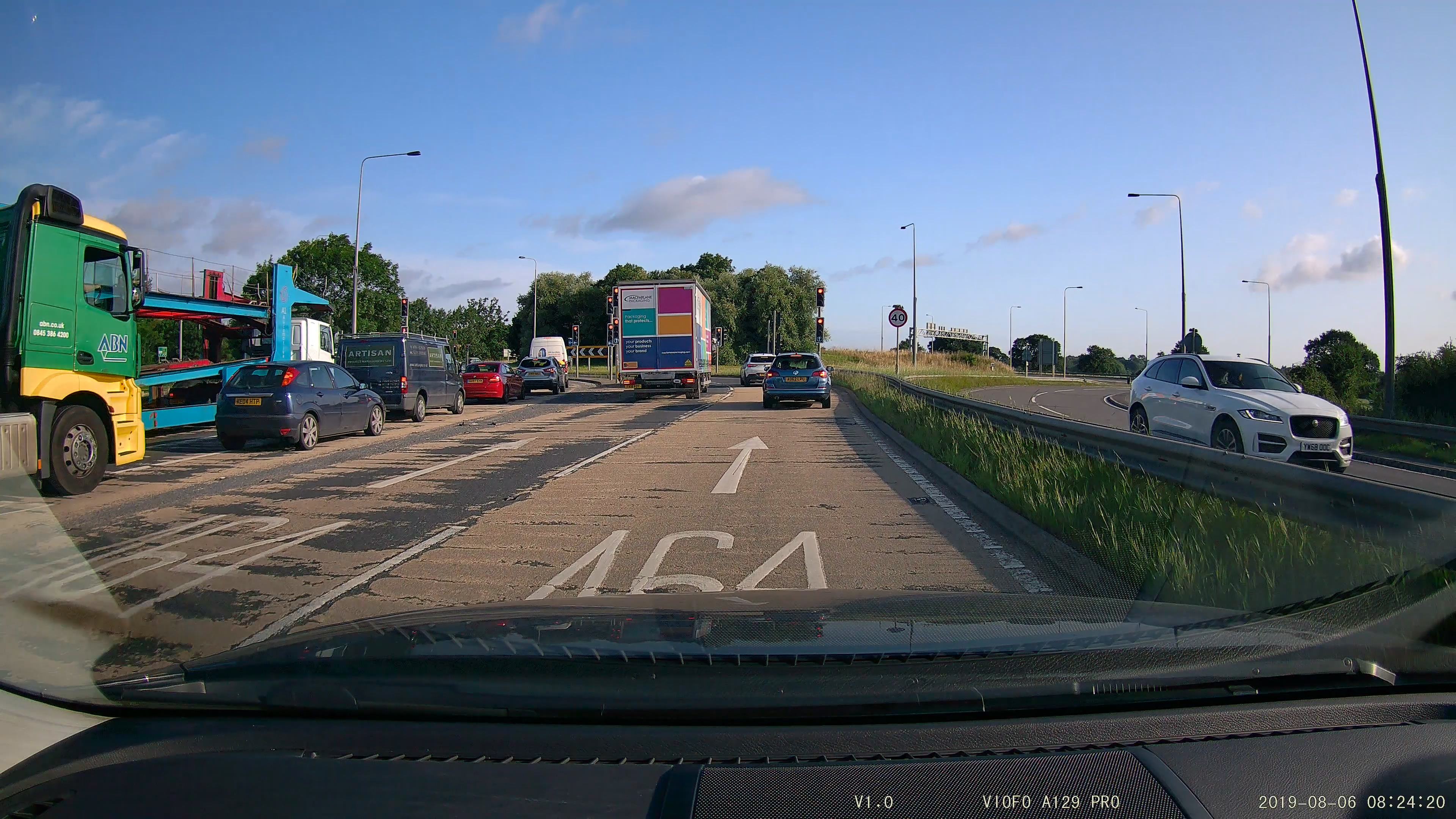 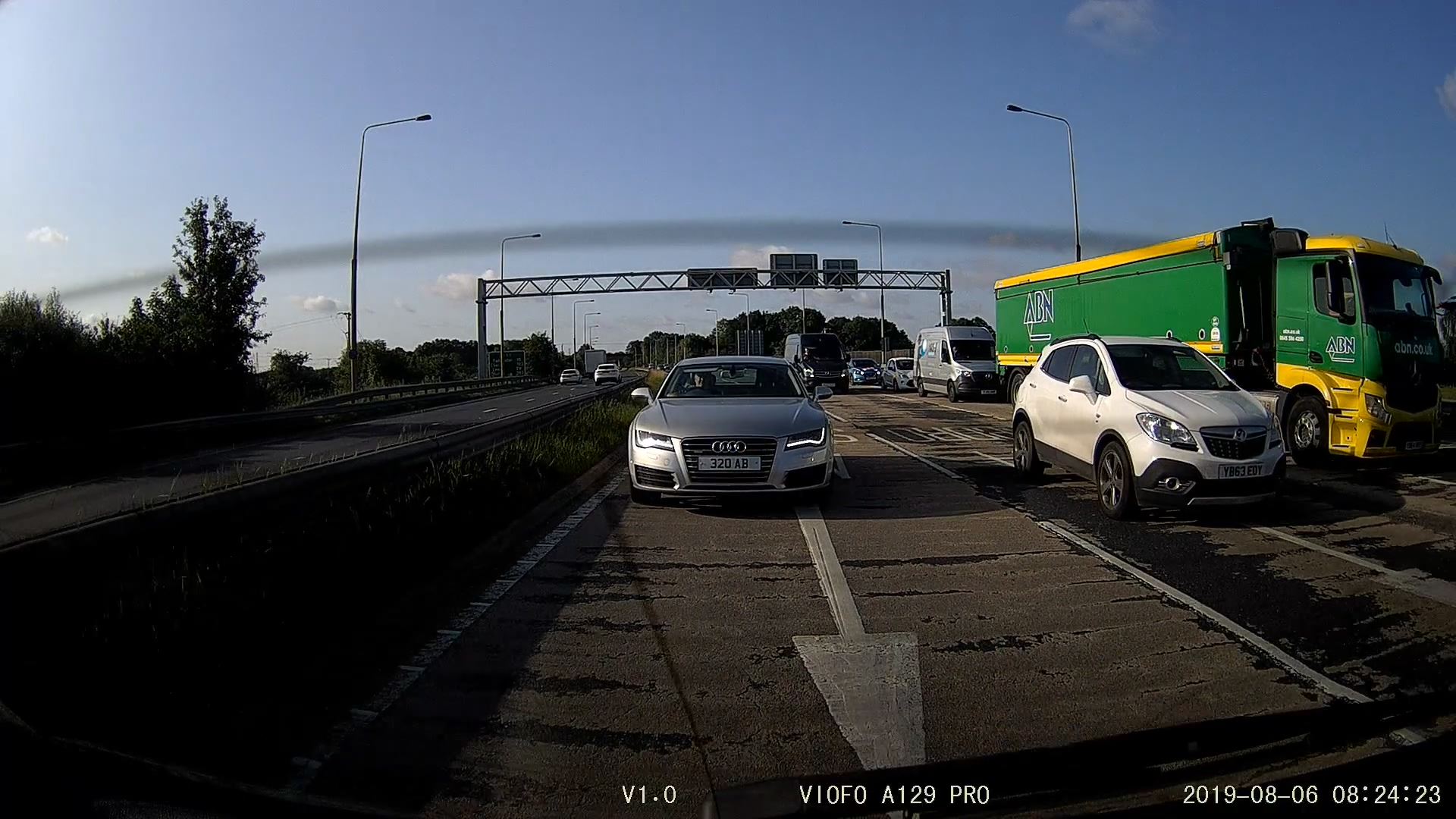 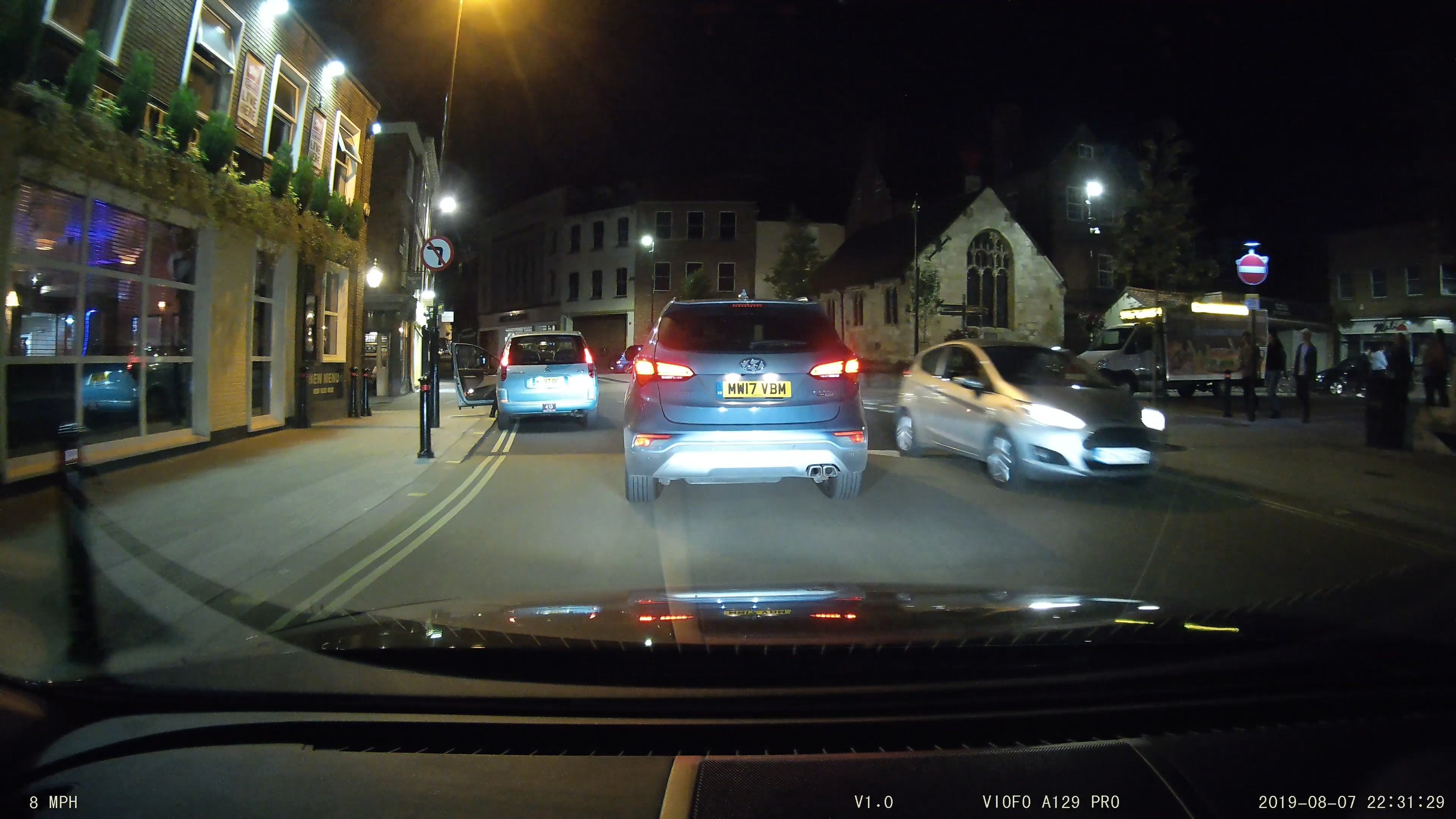