The Crosstour CR300 is a Chinese single channel dash camera released in Jan 2018. The camera is low priced at $30 and is popular on Amazon. While the camera looks almost identical to the Pathinglek FHD, there are some differences between the 2 cameras.

Unfortunately Crosstour does not disclose the processor and CMOS sensor for this camera. However, given the $30 price point, we suspect the camera is using entry level electronics.

The Crosstour CR300 records 1080p video at 30fps with an average bitrate of 16 Mbps. Video quality during the day is above average and night quality is below average. While not the greatest, video quality is better than many other $30 cameras such as the Pathinglek FHD and Innosinpo A10.

The camera has a 3″ screen and g-sensor but does not come with GPS or WiFi. This is expected given it is a $30 basic dash cam. While the CR300 provides non-buffered parking mode if you hardwire the dash cam to your vehicle, this is not recommended due to its poor performance in hot environments (see known problems).

The camera comes with a suction mount that can swivel 360° to record interactions at your side windows (i.e. police traffic stop). The Crosstour CR300 is a small camera at 89 x 52 x 35mm but the hanging rectangular form factor is not the most discreet. Unfortunately the build quality is not the greatest and this lightweight camera feels cheaply built. Mount problems are common with this camera as well. Like most cheap cameras, the CR300 only comes with screen error notifications.

Crosstour  appears to be responsive to questions but beyond that, the camera has limited support. We have not seen any firmware updates for this camera since it has been launched.

Note that many Amazon buyers indicate that Crosstour will send a free microSC card in exchange for a 5-star review. This unethical practice is likely influencing the Amazon reviews.

Many users have had the mount holder on the camera break as shown in the following photos. This is due to the cheap quality plastic used in this camera.

Damage due to heat

Numerous owners have complained of the camera being damaged on hot days. There are 2 ways this happens. The camera camera melting / warping due to the heat or the battery expanding causing the camera case to break.

The Crosstour CR300 may seem like a bargain at $30 since it has acceptable video quality but be aware of the negatives with this camera. Low build quality, poor performance in the heat, limited support and below average reliability are concerns.

The free SD card in exchange for positive reviews has likely influenced the Amazon rating for this camera. We suggest investing a bit more for a better dash cam. 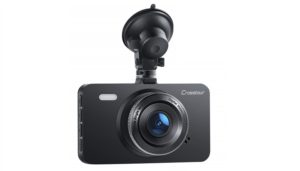 The Crosstour CR300 similar to other $30 low priced dash cams but with slightly better video quality. Camera is cheaply made and not worth the money.