The 70mai Dash Cam Pro Plus+ A500S is a Chinese dual channel dash camera released in Feb 2021. This is the third iteration of this popular dash cam.

The differences are summarized in the following table:

This series of dash cams have been very popular due to its low cost and good video quality. The latest version, the Dash Cam Pro Plus+ was updated due to increased processor costs from HUAWEI. As a result of these higher costs, 70mai is moving away from the HiSilicon Hi3556 processors.

The 70mai A500S front camera records 1944p video at 30fps with an average bitrate of 24.8 Mbps. Video quality during the day is very good and night quality is good. Videos appear to be on par with the previous A500 (both use the same 2G4P lens – 2 layer glass & 4 layers plastic). However when comparing to the original Dash Cam Pro which uses a 6G lens (6 layers glass), the video appears to be not as sharp. This could be due to the lens or early firmware.

There is one thing to be aware of on the video resolution. The A500S uses a 4:3 frame which makes the videos look more narrow when compared to the popular 16:9 frame. This is due to 70mai using the maximum video resolution natively available in the IMX335 CMOS sensor.

The RC06 rear camera records 1080p video at 30fps with an average bitrate of 8 Mbps. When compared to the excellent front camera, the rear camera does not perform as well. The 1080p has good video quality during the day and average at night but some owners have received cameras with below average video quality.

While the rear camera is optional, we suggest purchasing it since the incremental cost for the dual camera version is only $20 more.

The 70mai A500S has identical features as the A500 it is replacing. It has a 2″ screen, g-sensor and built in GPS. The camera comes with WiFi and supporting apps for Android and iOS. Unlike many dash cams with poorly designed apps, the 70mai app is pretty good. The A500S has Advanced Driver Assistance Systems (ADAS) built into the camera. Most owners find this feature annoying and typically turn it off.

The A500S is a small camera at 87.5 x 53 x 19mm and we are fans of the discreet wedge shaped form factor. The camera comes with audio, screen and LED error notifications. The build quality is good and we expect reliability to be similar to the A500 which was above average.

Their are a couple of negatives to be aware of on the 70mai A500S. While parking mode can be enabled, the only option is non-buffered which is not ideal. Also note that you will need to use the optional 70mai hardwire cable for this to work.

The other negative, as can be seen in the pictures below, is that the camera uses a 500mAh battery instead of a capacitor which is not ideal in hot climates. The battery uses a plugin connector which makes it easy to change if it ever dies. No soldering is required if you purchase a direct replacement battery such as this one on Aliexpress.

70mai support outside of China is not the greatest. However they do create firmware updates for their cameras to fix bugs and enable new capabilities which is a positive. 70mai provides a 12 month warranty, which is standard for most dash cams.

The camera has been recently released and there haven’t been any widespread problems.

Note the 4:3 aspect ratio for the videos.

You can see some reviews on our forum here and here.

The main drawbacks are the included battery instead of capacitor, 4:3 video aspect ratio (not a big deal but some people may not like this) and no buffered parking mode. Also the rear video quality is not the best. Overall a very good value for money dash cam.

Where to purchase for lowest price

The 70mai A500S sells on Amazon, Aliexpress and eBay.

Note: Links to vendors are affiliate links that support our website. Read our affiliate disclosure here. 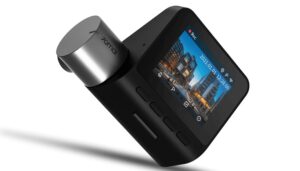 The 70mai Dash Cam Pro Plus+ A500S is a nice upgrade in the Dash Cam Pro Series due to the 2 channel support. Very good video quality for the price.