The APEMAN C860 is a Chinese dual dash cam that was initially released in November 2018 but has been updated in January of 2020. The current generation C860 has some noticeable differences from the original one:

The original C860 is based on a design used by numerous other Chinese cameras. The Lenovo HR07, RayBerry E2 and Papago S80 Wifi all appear to be identical cameras. The new generation C860 has moved to a unique design which differentiates it from these other similar cameras.

The C860 is a low priced dual camera making it very popular on Amazon. APEMAN does not indicate which processor the C860 is using but they do claim the front camera has a Sony IMX335 CMOS. There is no indication of the rear camera CMOS.

The C860 claims to record 1440p video at 30fps. Video quality for the front camera during the day is good and night quality is below average. Seems to perform worse at night then other cameras using the IMX335 (note there is no easy way of confirming what CMOS sensor the camera is using).

The rear camera is supposed to record 1080p video at 30fps. The video quality is below average during the day and poor at night. In many cases the video looks blurry. Unfortunately the quality is not on par when compared with other 1080p cameras.

The C860 allows you to choose whether to record using the H.264 codec or the H.265 video codec. Videos recorded with H.265 are approximately 20% smaller than H.264 videos. The main drawback is that H.265 files may not be compatible with older computers. Being able to choose the codec is a nice feature.

The camera has a 3″ screen, g-sensor and non-buffered parking mode. It does not come with GPS or WiFi. On the positive side, the camera comes with a suction cup mount which allows the C860 to be swiveled 360° to record interactions at your side windows (i.e. police traffic stop). Error notifications are displayed on the screen, there are no audio error notifications.

The C860 is not too large with dimensions of 89mm x 52mm x 31mm. However, the hanging rectangular form factor and checkerboard pattern (instead of all black) results in a non-discreet install.

Build quality is average and somewhat flimsy, while long term reliability also appears to be average. The suction cup mount is not the greatest and some owners indicate it falls off the windshield. The camera uses a 420mAh battery instead of a capacitor making it not suitable for parking mode in hot environments.

The manufacturer appears to be responsive to questions but beyond that, the camera has limited support. We have not seen any firmware updates for this camera since it has been launched.

Like other APEMAN products, the C860 has a large number of very good reviews on Amazon. APEMAN provides a free gift in exchange for 5-start reviews which may influence the Amazon ratings. Recently, there are reports that APEMAN will provide a free camera for reviews of at least 400 characters which include a picture or video.

The camera supports 128GB microSD cards but many users struggle to get larger cards (>32GB) to work. Cards need to be formatted using FAT32.

The APEMAN C860 is a popular camera on Amazon and has a number of positives going for it:

However there are a number of drawbacks. While it claims to be 1440p front and 1080p rear, the quality is not up to par with comparable cameras. Build quality and reliability are average. There are no audio error alerts and the utilization of a battery instead of capicator is not ideal for hot environments.

Overall not the best value for money. We suspect the free gift in exchange for positive reviews has influenced the Amazon rating for this camera. See what other owners have to say about the APEMAN C860 on our forum.

The English user manual can be downloaded here. 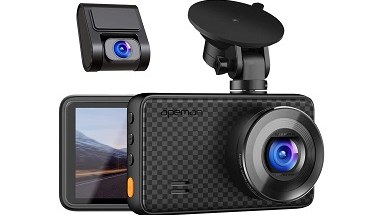