The CHORTAU B-T13 is a Chinese camera released in March 2019 which has become a very popular on Amazon. While the specs of the processor and CMOS sensor have not been disclosed, we suspect the camera is using the JIELI AC5601A processor and Galaxycore GC2023 CMOS sensor. These components are somewhat common in cheap dual dash cams.

Video quality for the front camera is average during the day and poor at night. The front camera records 1080p video at 30fps. There are numerous complaints of choppy / blinking video with this camera. The 6 IR LEDs in the front of the camera are useless and do not improve video quality.

The rear camera is waterproof and can be installed inside or outside the vehicle. Unfortunately the rear camera records at 480p and has very poor video quality, particularly at night.

The rear camera can be used as a backup camera. It comes with a red wire which you can tap to the reverse light of your vehicle. If this red wire is connected, the dash cam’s display will automatically go full screen to the backup camera when going into reverse. One major negative of the rear camera is that it records a mirror image of proper rear camera orientation. There is no way to flip this image.

The B-T13 has a 3″ screen, g-sensor and non-buffered parking mode. The screen can display 1 of 5 modes while driving:

The camera does not come with GPS or WiFi. The B-T13 comes with a suction cup mount which allows it to be swiveled 360° to record interactions at your side windows (i.e. police traffic stop). Error notifications are displayed on the screen and there are no audio notifications.

The CHORTAU B-T13 is a medium sized camera at 76mm x 41mm x 15mm. Build quality is average at best and some owners have complained of quality control issues. Breaking mounts and microSD cards that do not stay in the camera are some of the complaints occasionally raised. Another concern raised is that the camera gets very hot when running for over 10 minutes.

The suction cup and hanging form factor makes it a little bit less discreet than many wedge or cylindrical cameras. CHORTAU provides very little support for this camera and we have not seen any firmware updates since it has been launched.

Note that while the camera has a large number of very good reviews on Amazon, CHORTAU provides a free gift in exchange for 5-start reviews. This may influence the ratings there.

Memory card errors are the most common problem reported. Make sure you are using a high quality microSD card purchased from a reputable source.

Day Video – Rear (jump to 56 seconds in the video)

While the CHORTAU B-T13 has been a popular camera on Amazon, we are not impressed with the video quality from this camera which is average at best during the day and poor at night. Build quality is not the greatest and there is virtually no support.

We suspect the free gift in exchange for positive reviews has influenced the Amazon rating for this camera. The only real positive for this camera is the low $50 price tag. If your budget is $50, you are better off skipping dual cameras and get a better quality single camera. 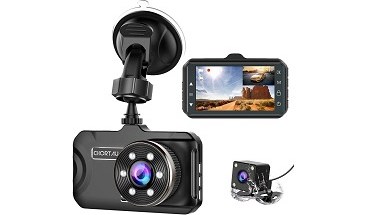