Note that the 6 LED lights provide no real benefit when used as a dash cam.  Hence some people prefer the sleeker design of the DVR-007 without the LED lights as seen below.  This camera is identical internally however the screen does not rotate like the DVR-027.

This dash cam has proven to be a very reliable camera with good video quality.  There are many fake versions of this dash cam available as well.  Video quality of the fake cameras is significantly worse than the real DVR-027.

The DVR-027 was originally based on the Coach 10P Zoran ZR36482BGCF processor as pictured below.

Note that a new model has been released, called the DVR-207.  It is quite similar to the DVR-027 but comes with newer firmware and no gaps between files.

Generally, there are no publicly available tools to extract the firmware on Zoran based devices.  Hence, when purchasing this camera, you will likely not be able to upgrade the firmware in the future.  If firmware files become readily available, we will post them here including the procedure on how to upgrade.

Given the popularity of this camera, there are dozens of fake models available for sale.  There are numerous ways to tell the difference between original DVR-027 models and fake models.

Note that fake DVR-027 may have some or many of the above features. So pay attention to all the features not just a specific feature.  Purchasing from a reputable seller will help you purchase an original version.

There are not many major problems with this camera and it has proven to be quite reliable.

The main problem reported by users is a noticeable gap between video clips (1 to 5 seconds).  This can be somewhat mitigated by

One of our members, dashcam.br, performed a test on gaps between files for this camera in this thread and came to the conclusion 15 min segments minimize the total potential loss of footage.  The details for the DVR-027, class 4 card formatted with FAT 32 and 64 kB clusters are as follows:

Interferes with the radio

Interference may be caused by the 12-5v Converter supplied.  Buy another converter – Standard 12-5V USB.

Focus is poor when recording

The problem is likely associated with a damaged lens. You can try to return the goods to the seller and ask for a replacement.

You can download the user manual for the DVR-007 here. 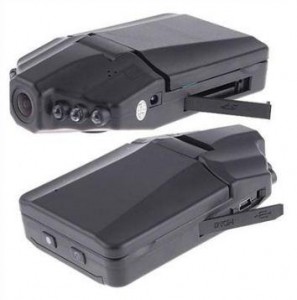 The DVR 027 has good picture quality, reliability and price. Watch out for fakes. Consider the G1W instead.