The DVR-207 dash cam is an update to the very popular DVR-027 dash cam.  It was released in early 2013 and comes in the same case as the DVR-027.  The DVR-207 also uses the same Zoran Coach 12MDV ZR364249BGCG processor.  This camera has a 1440x1080p resolution at 15fps however this appears to be interpolated.  The 1280x720p resolution delivers the best video for this camera.  The main benefit of this newer version over the DVR-027 is that it has no gaps between video files.

Generally, there are no publicly available tools to extract the firmware on Zoran based devices.  Hence, when purchasing this camera, you will likely not be able to upgrade the firmware in the future.  If firmware files become readily available, we will post them here including the procedure on how to upgrade.

The original DVR-027 has proven to be quite reliable.  Less information is available on this particular model but there have been some noted issues:

Does not work / Crashing / Black Screen

Image is bumpy / not sharp

Numerous owners have indicated that the DVR charger may cause radio interference issues, you can try to change the charger to another or ask seller to ship you a better one. The seller has indicated that units shipping after March 16, 2013 will be packed with new charger, which should fix the problems.

Make sure motion detection is off otherwise the camera will generate gaps between clips.

Some users are indicating the exposure level of the camera does not work properly.

The problem is that the lens does not have any optical shielding.  A simple solution is to attach a piece of black velcro above the lens to correct.  See this post for further details.

This camera has some improvements over the original DVR-027 such as no gaps between video files.  While this camera is a bit dated and video quality is no where near as good as the recent 1080p cameras, the price is hard to beat.  For $45, this is the low priced camera, but we suggest spending a few extra dollars and purchasing the G1W.

The user manual can be downloaded here. 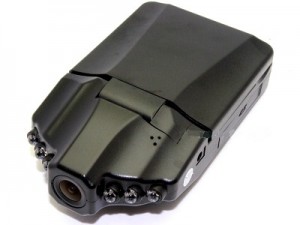 The DVR-207 has good picture quality, reliability and price. Watch out for fakes. Consider the G1W instead.