The video quality for this camera is very good in the day and average at night.  Originally this camera came with a higher quality convex lens.  As the camera became more popular, the lens was changed to a cheaper flat lens.  The image below shows the old lens on the left and the new lens on the right.

Unfortunately the image quality of the original lens is better than the newer lens.  The old lens had a wider viewing angle (115 degrees) compared to the new lens (95 degrees).   Many users have complained that once the camera heats up, the video quality becomes blurry, particularly with the new lens.  Not all cameras are afflicted but there is no way to tell if your camera will suffer from this problem prior to purchasing.  Note that there are reports that the latest cameras have a new lens that rectifies the blurring problem.  This hasn’t been confirmed by many people though.

There are various F302A models available under different names.  Here is a partial list.

There are a handful of fake F302A models for sale as well.  The picture quality is not high definition on these cameras.  The primary way to identify a fake camera is the lack of an HDMI port.  A few examples of fakes are below.

The primary problem with this camera is too much heat build up that causes a blurry picture quality.  Sometimes the entire screen is blurry, other times it is just the right or left side.  The cause of this problem is due to a processor that produces a lot of heat and little ventilation to dissipate the heat.  Compounding the problem is the low budget lens (particularly in newer models).  The lens is negatively effected by the heat causing the blurry or out of focus image.

Some users have complained about a vertical band during night recording.  There is no known solution to this problem but it is not that common.

Interference may be caused by the 12-5v Converter supplied.  Buy another converter – Standard 12-5V USB.

Focus is poor when recording

The problem is likely associated with a damaged lens. You can try to return the goods to the seller and ask for a replacement.

Do not try to flash dash cams with incompatible firmware. For example, if you have a F302A dash cam without a working HDMI port, do not use this firmware.

The most common firmware versions for this camera are:

Generally, there are no publicly available tools to extract the firmware on Zoran based devices.  Hence, it is difficult to find firmware for this camera. 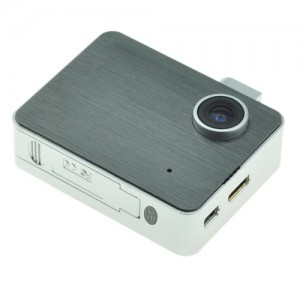 The F302A has blurry picture quality when the camera overheats. Avoid.