The rear camera is mounted separately on the rear window  rather than being part of the main unit.  This setup has better rear picture quality than the all-in-one dual cameras since it only records what is happening outside the car rather than inside the car.

Most of the these dash cams are using the Allwinner F20 processor as pictured below.

There are a few models with the SQ909B-L processor as pictured below.

Like most Chinese cameras, there are many manufacturers with different specs.  Some of the differences are as follows:

This camera, like many Chinese cameras, has a number of different names:

The DM300 (sometimes referred to as the K7000) is a similar camera that claims to have 1080p recording.  The DM300 apparently runs on the popular Ambarella A2S60 processor.  The camera typically sells for over $100 and has an HDMI port.  Note that some of the DM300’s come with a low quality Novatek processor. Unfortunately it appears that the DM300 is a single lens camera, not a dual lens camera.  It has a AV-Out not an AV-In port.  See this eBay listing for the most popular DM300 sold to date and notice it is only a single lens camera.  Some ads show the DM300 as a dual lens camera but these ads appear to be misleading.

We have not been able to verify the quality of the DM300 and there is very little information available on this camera to date.

There is another version of this camera that comes with a larger 2.7″ LCD screen instead of the 2″ LCD screen.  As can be seen in the picture, the i1000L is larger than the i1000/F70 model.

Since this is a relatively new camera, there have not been many reliability problems noted yet.

Some users have noted that this camera gets very warm / hot.  There have been no reports of problems related to this yet though.

Some users indicate that the rear video is a mirror image.  There apparently is no way to flip the image in the dash cam.

Some complaints of rattling buttons in this dash cam.  This may be an isolated incident.

There is a report that the G-Sensor setting does not work.  When a G-sensor option is selected (low, med, or high) the dash cam switches off.  When the dash cam is turned on, the setting is back to OFF.  This may be an isolated incident.

While the picture quality is not the greatest, this camera performs adequately for a dual lens camera particularly in the day.  Poor night quality is the biggest drawback.  The size of the camera is small and the price is very attractive.  If you are looking for a dual lens camera and can live with the picture quality, this dash cam may be for you.

Currently there is no publicly known way to extract or upgrade the firmware in these dash cams.  There are numerous known firmware versions that have been sold: 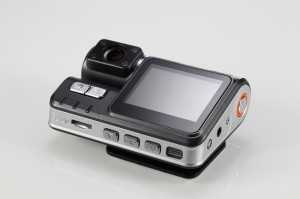 The i1000 / F70 is an affordable dual lens camera. Video quality, particularly at night, is biggest drawback.