The Mini 0801 dash cam, is a Chinese camera that records 1080p at 30f/s with an average bit rate between 10,000kpbs and 12,000kpbs depending on firmware .  Externally, this camera has some resemblance with the Smallest HD 720p dash camera but the internal hardware is completely different.  There are at least 2 Chinese manufacturers of this camera and typically the hardware is based on the Ambarella A2S60 processor and the Omnivision OV2710 CMOS sensor.  Like many cameras using this combination of processor and CMOS sensor, video quality during the day is very good and night quality is average.  Another nice feature of this camera is it’s quick mount that has electrical contacts built it.

What differentiates this camera from others is its small size (75x47x3.5mm), 62g weight, 1.5″ screen and G-sensor.  There appear to be 4 different models for sale as well:

The early versions of this camera had 512MB of internal memory or no internal memory.  Note that most versions of this camera save the video files in TS format.  The manufacturers had created a MOV version of this camera but the firmware had issues in performing loop recording and was less stable.  The quality between MOV and TS does not differ but TS files can be more difficult to work with.  For instance, they are not natively usable in the popular dash cam software Registrator Viewer.  As of September 2013, the MOV firmware is now for sale.   The previous TS firmware was very stable but the initial MOV firmware had some issues.  The most recent firmware versions, while more stable are still causing issues for some owners.

We would like to thank our member JazJon for providing a lot of valuable information for this FAQ.

Like many Chinese cameras, this dash cam is sold under various names:

A number of early owners have complained about poor audio, particularly distortion at loud volumes.  This is most likely a microphone problem.  Replacing the microphone or using a small amount of foam padding can correct this issue.  Recent owners have not raised this complaint as often but audio quality does not appear to be spectacular.

A small number of owners have indicated that focus is either too close or the picture is not the sharpest.  This appears to be a quality control issue with the lens and could potentially be corrected by adjusting the lens.

Currently there is no MPH setting for this camera.  Speed is only recorded on the video in KM/H.  This may be corrected in future firmware releases.  Note that firmware 20131202 is MPH only.

Some Russian owners of the Procam CX4 have indicated that over time the camera will get loose in the dock.  This in turn causes the camera to vibrate and results in poor audio quality.  Typically this would be a concern only if you remove and reinstall the camera frequently / daily.

Early versions of this camera with GPS had an issue that the time zone would reset.  The only known solution was to use the camera without GPS to resolve.

Some owners have indicated this camera has a “Low Speed Card Error” and has problems cycling videos (deleting oldest video when card is full) using a class 10 Micro SD card.  Class 4 or Class 6cards appear to resolve this problem.

It is best to avoid Class 10 cards with this camera as per the manual.  Class 10 cards use a different bus that may not be backwards compatible. The Samsung Class 6 microSD card is one of the most stable cards for the Mini 0801.

Some owners have had a “Storage IO Error” with the camera powering off when the microSD card was full.  This has been corrected in the 20130924 firmware.

One owner has indicated that the camera will literally freeze when temperatures reach -20C or colder.  The blue light will come on but you can’t turn it off and it isn’t recording.  Once the camera warms up, it works again

One of our members, JazJon has come up with a polarizing filter solution to eliminate windshield reflections / glare.  You can read all about his project here.

The following LED light sequence describes how the camera is recording.

Some users have asked what the power draw is for this camera.  One of our members OldGoat has determined the Amp draw to be as follows.seq — function/status — current drawn in amps:

This camera is quite similar to a GS1000 in a smaller, more discreet package.  If you are looking for a 1080p discreet camera with a screen and GPS, this is a viable option.  Unfortunately the ongoing firmware issues make this a difficult camera to recommend.

If you don’t need the screen and GPS and are looking for slightly better video quality, consider the Mobius.  Overall the Mini 0801 is a good value for the money.

Our member JazJon has created a video of the firmware upgrade process.

Our member Tobi@s has firmware available from his site as well.

Note that the firmware version is a date code and the following versions have been reported for sale.

Our members have been working on custom firmware versions as well.  You can find them in this thread on our forum.

Our member Tobi@s has created an Ambarella A2 Romkitchen that is available in this thread.

The software player that comes with the camera can be downloaded below:

WARNING!  MAKING CHANGES TO YOUR FIRMWARE ARE PERFORMED AT YOUR OWN RISK.  WE ARE NOT RESPONSIBLE FOR ANY DAMAGE TO YOUR DASH CAM AS A RESULT OF THESE INSTRUCTIONS.  THIS OPERATION WILL LIKELY DESTROY THE CABLE IN THE PROCESS.

Our member, nuxator, was able to unbrick his camera using the following approach.
To flash the bricked cam you’ll need:

If it doesn’t work, keep the power button pressed for 10~15sec and try again.

If you do not have an USB OTG cable you can use a Micro USB dongle jig or you can create one in the following way:
Open the cable provided with the cam with a sharp tool on the mini usb plug.  But be careful, the cable has 2 layers of pins one above the other.

Make a shortcut with a pinpoint between pin 4 an 5 as on the picture.   Black cable with the one without solder. Forget about red, it broke when taking the picture.
Unsure if you can release the pin during process so keep it this way on all the time. 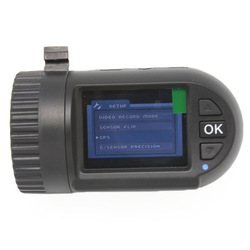