The Mouse DVR is a Chinese dash cam that records 1080p at 30fps.  The video quality during the day is very good but night quality is  below average.  This camera is based on the popular Ambarella A2S60 processor.

When this camera was released, it became popular due to the very good video quality particularly during the day.  It utilizes a high bit rate, typically 14Mbps.  This is much higher than the 8Mbps in comparable A2S60 cameras such as the F500LHD and F900LHD.  Note that the manufacturer recommends using a class 6 SD card for this camera since class 10 cards often have problems.

The Mouse DVR does not have GPS or a G-sensor.  This dash cam is relatively large in size as can be seen in this comparison picture with other dash cams.

Unfortunately, this camera has been plagued with problems making it a poor choice for a dash cam.

While this camera has been nicknamed the “Mouse DVR” due to its resemblance to a computer mouse, it is sold under a variety of names.  Note that the primary distributor (perhaps manufacturer) appears to be Givoe Technology.

Lines on the video

Numerous users complain that their videos have horizontal lines running through them.  These lines are typically red or blue as seen in the pictures below.

Givoe has provided instructions on how to correct this problem.  You will need to solder the red wire to fix it.

In some instances the video is wavy like this example.

To fix this problem, the lens must be replaced.  Givoe has provided instructions on how to replace the lens.

Many of these cameras have poor overall build quality.  Loose screws, poor battery contact and rattling parts have been noted.  Some cameras appear to be fine while others suffer these problems indicating a quality control issue.

Some users complain that the camera freezes or hangs occasionally usually when it is starting up.  Not all cameras are afflicted with this problem so this is likely a quality control issue.

Even though this camera has very good picture quality during the day, the large size and the number of reliability problems with this camera, makes it unattractive.  We do not recommend purchasing it.

There are numerous known firmware versions that have been sold:

Instructions to update firmware can be found below: 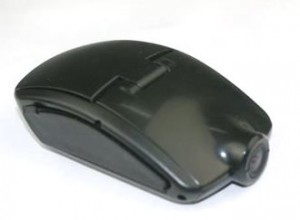 The Mouse DVR should be avoided due to the large size and number of reliability problems.