The SJ4000 dash cam is a Chinese camera manufactured by a company called Hongfeng Century.  This camera has a striking resemblance to the GoPro family of cameras.  In fact, many of the GoPro accessories and attachments work with this camera (Note the GoPro batteries are not compatible).  Unfortunately, like the GoPro cameras, SJ4000 is not the most discreet when used as a dash cam.  The SJ4000 comes in 7 colors but you probably want to stick with black if you use this as a dash cam.

The camera has very good picture quality during the day and average picture quality at night.  Some owners complain of a bluish tinge in the videos but this does not effect every camera.  The SJ4000 records 1080p at 30f/s with an average bit rate of approximately 15,000kpbs.  Like many of the cameras released in the last year, this SJ4000 is based on the Novatek NT96650 processor and the Aptina AR0330 CMOS sensor.

This camera does not come with a G-sensor or GPS but it comes with a 1.5″ LCD screen.  Size is not too large at 59.27 x 41.13 x 29.28 mm but the camera is still quite noticeable due to its form factor.  If you plan to use the SJ4000 as a dashboard camera, you will likely need to purchase the Car charger / adapter and car bracket / mount separately.  Most vendors do not include these accessories with the SJ4000.

In August 2014, Hongfeng Century released a WiFi version of the SJ4000.  This camera is identical to the original SJ4000 but the added WiFi feature.  Android and iOS apps are available to support this feature (search for SJCam).

The SJCAM series of cameras has attracted a lot of copies / lower specification versions such as the AMKOV AMK5000.  Adding to the confusion is the number of companies involved in this camera.   We will try to clarify it here:

There are reports that Dongguan Nengyu Technology Co is a legitimate manufacturer of SJCAMs as well but we have not been able to confirm yet.

Given the less than $100 price tag and decent video quality, this camera has proved to be quite popular.  However numerous issues have been identified by owners:

Some owners receive a “cluster size wrong” error message on their cameras.  To resolve this try the following:

If that does not correct the problem, the camera may be defective.

Camera only works on USB

Some owners have indicated that the camera only works when connected on USB.  This is due to a bad battery.  To correct the problem, replace the battery.

Others have indicated there is a small piece of white tape over the battery contacts.  This may prevent the battery from making contact to the camera.  Removing the tape will correct this problem.

Many owners have complained that the USB is weakly soldered /  mounted on the circuit board.  When inserting or removing the USB cable, the port can break or snap away from the circuit board.  To fix this problem you will need to disassemble the camera and resolder the port.

The door for the battery cover is unattached.  Some owners have lost / misplaced this cover.  Also the battery compartment catch tends to jam in a diagonal position when trying to close.  Ideally the cover would be attached to the case.

Attachments do not Grip

Some owners indicate the camera will freeze on the “Welcome” screen.  There are no known solutions for this problem but it would make sense to try a different Micro-SD card and a different battery.

Power Button Does Not Work

Many users have indicated that the power button does not work with a normal press.  Users would have to press very hard or for a long time to get it to work.  To fix this problem you will need to disassemble the camera and put a small piece of electrical tape on the button for the camera.  This extra piece of tape allows for the button to work correctly.  The following video shows how to repair it.

There are at least 2 versions of the SJ4000.  When trying to upgrade a camera with the incorrect firmware, users have experienced a white screen of death.  To resolve this problem you will need to flash a compatible firmware for your camera (firmware downloads are provided below).  The following video illustrates the problem and the fix.

One owner has indicated this camera has a significant amount of background noise when used as a dash cam.  Typically these problems are due to the power charger but we have not been able to confirm if that is the case for this camera.

One owner has claimed that he has had 2 charging cables explode / burn up.  The camera becomes unresponsive once this happens.  Below is a picture of the disassembled charging cable with the damaged circuit board.

Life, Tech and Moto has created a good teardown video for the SJ4000.

RCGroups have created detailed instructions and pictures for disassembling the camera.  Note that disconnecting the display ribbon cable is very easy if the clear screen cover is removed from the back of the camera.  This is only held on by adhesive, and can be pried up from the camera body using a fine screwdriver. This enables the LCD display to be lifted clear, exposing the ribbon cable connector.

While the camera appears to be a great action cam or a GoPro on a budget, we consider this to be an average dash cam for the money.  The video quality is on par with other NT96650 + AR0330 cameras and the price is reasonable for approximately $100.  Unfortunately, it is not the most discreet.  We prefer the Mobius which is based on the same chipset but is much smaller and more affordable.

However, if you are looking for a more versatile camera that can be used as an action camera and a dashboard camera, this one is a reasonable purchase.  Build quality and reliability appear to be average but that is expected at this price range.

Overall a great alternative to a GoPro camera and is a reasonable choice if you are looking for more than just a dash cam.

The latest firmware is now available on the SJCAM site. 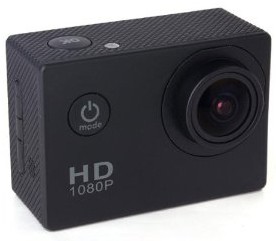 The SJ4000 is a GoPro clone for a reasonable price. Great action cam and ok as a dash cam.