The Toguard CE41 is a Chinese camera released in October 2019. This rideshare camera has a low price point and is very popular on Amazon. This is a generic Chinese model that has been branded as Toguard and can be found under numerous other names (H190, Camsel DVR 240, FCCWO F2, E29). While the specs of the processor and CMOS sensor have not been disclosed, we suspect the camera is using the JIELI JL5401B processor and an SC2363P CMOS sensor, typical for this low price point.

Video quality for the front camera is average during the day and below average at night. The front camera records 1080p video at 30fps but in some cases the video appears to be choppy. The interior camera records 720p at 30fps. During the day, the cabin video is good. At night the video changes from color to mono and the 4 IR LEDs illuminate the cabin. Quality is average at night for the interior camera.

The Toguard CE41 does not come with GPS or WiFi. This dash cam does come with a suction cup mount which allows it to be swiveled 360° to record interactions at your side windows (i.e. police traffic stop). No error notifications exist for this camera and numerous owners have indicated the CE41 stopped recording for months with no notification that anything was wrong.

The Toguard CE41 has a 1.5″ screen and is a medium sized at 112 mm x 38 mm x 40mm. Build quality is below average and the camera appears to use low quality plastics that can get damaged with heat. The suction cup mount is flimsy and there are numerous complaints of it breaking or not staying on the windshield.

The suction cup and hanging form factor makes it a little bit less discreet than many wedge or cylindrical cameras.

Since this is a generic Chinese camera, Toguard provides very little support and we have not seen any firmware updates since it has been launched.

Numerous owners indicate that the heat has damaged / warped the plastic molding of the camera, usually where the mount connects to the camera. The plastic materials used appear to be very low quality as can be seen in the pictures below. Also note that this heat damage typically impacts image quality as well with image quality deteriorating over time.

Build quality is not the greatest and the camera uses very cheap plastic that will damage / warp in the heat. Firmware updates are non-existent as well. While the $90 price tag is attractive for a dual rideshare camera, the negatives outweigh the positives for this camera. 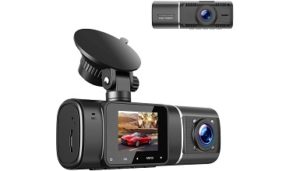