The VAVA VA-VD002, launched January 2019, is the first dual camera launched by the Chinese manufacturer VAVA. Like previous VAVA cameras, the VA-VD002 front camera has a unique cylindrical puck shape while the rear camera is a more traditional circular camera.

The VAVA VA-VD002 uses a Novatek NT96663 processor, a Sony STARVIS IMX307 CMOS sensor for the front camera and a Sony Exmor IMX323 sensor for the rear camera. This hardware specifications are quite good and allows the camera to record at 1080p 30fps for both the front and rear camera.

While the VA-VD002 front camera is quite small at 28mm x 70mm, the cone shaped mount is large and not the most discreet. The mount is unique in that it uses both adhesive and suction to attach to the windshield. Another positive feature of the mount is that you can swivel the camera 360° allowing you to record interactions with police officers. Note that the mount is designed for a window rake of 17° to 58° and will not work on vertical windshields. The rear camera is more traditional circular form factor which mounts using adhesive.

The VAVA VA-VD002 does not come with a screen or buttons on the camera. There are 2 small LED lights that indicate the status of the camera. Unfortunately there are no audio error notifications and the LED notifications are confusing since an error can be notified with a blue color or red color as per the table below.

The camera comes with a separate bluetooth button to take photos (press once) or to take videos (press and hold for 3 seconds). All other interactions with the camera such as adjusting settings, viewing videos and downloading videos is done via WiFi with the VAVA Dash app available for Android and iOS.

The camera has a g-sensor, built-in GPS and non-buffered parking mode. Unfortunately the camera uses a 320 mAh battery instead of a super capacitor making it not suitable for hot environments. On the positive side, the camera comes with an 18 month warranty, a bit longer than the standard 12 month warranty.

Note that while the camera has a large number of very good reviews on Amazon, there are numerous reports of VAVA offering money to remove negative reviews. Below is one example of many:

A number of users have complained of app connectivity problems with the Android app. Typically one of the following messages appear:

This problem is not widespread and appears to occur with only some Android devices. One tip is to turn off Cellular Data while using the VAVA Dash app.

The VAVA VA-VD002 is a uniquely designed dash cam with some interesting features at a reasonable price but the drawbacks outweigh the positives. The video quality is sub-par especially for the hardware used in this camera set. The camera also has poor error notification via the LED lights and uses a battery instead of a super capacitor (not suited for hot environments).

While the VA-VD002 is a popular camera on Amazon, we suspect the vendor paying to remove negative ratings might influence the Amazon rating. Overall not the best choice for a dual camera. See what other owners have to say about the VA-VD002 on our forum.

The English user manual can be downloaded here. 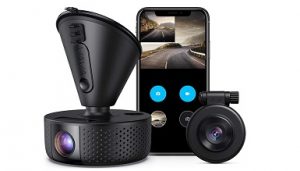 The VAVA VA-VD002 has a unique design and reasonable price but the sub-par video quality and poor error notification make it not the best choice for a dual cam.