The Vico-Marcus 3 is a Taiwanese camera sold by VicoVation (apparently another Taiwanese company is the actual manufacturer).  VicoVation has released some very high quality dash cams in the past including the TF2+ and WF1.   Many people have been eagerly awaiting the release of this camera.

The Marcus 3 comes with the Ambarella A7LA70D processor and the Aptina AR0330 CMOS sensor (we are still confirming the CMOS sensor).  This hardware is quite capable and allows for recording of 1296p at 30f/s with an average bit rate of approximately 18.5Mbps.  The camera can also record at 1080p at 60 f/s.

A similar scenario played out with the Vico-WF1 last year.  The camera was released with disappointing video quality but after approximately 6 months and many firmware updates, the video quality improved dramatically.  This may be the case for the Marcus 3.  Note that most of the Ambarella A7 cameras released to date have not had outstanding video quality.  This is most likely due to the platform being immature and early firmware versions have not been optimized.  We are hoping some major firmware improvements for all Ambarella A7 cameras will happen  in 2014 since the hardware is very capable.

The camera comes with G-sensor,  2″ screen, GPS (optional) and CPL filter (optional).  It also comes with Forward Collision Warning and Lane Departure Warning features but they are not that effective and most owners turn them off.  The camera now has parking mode which was added later via a firmware update.

The size of the Marcus 3 is 72 x 53 x 33 mm which is smaller than some of the previous VicoVation models.  Unfortunately the mounts are still very large (especially the suction mount) and the camera has 2 wires coming out of the side of the camera, one for power and one for GPS.  Overall not the most discrete camera.

This camera has just recently been released are there have not been many problems reported yet.

The early firmware versions of this cameras had problems with some MicroSD cards (i.e. Transcend).  The latest firmware appears to have resolved these problems.  VicoVation recommends a class 10 MicroSD card for this camera.

Many owners complain that the images are not crisp and clear from this camera.  This appears to be an “over sharpening” issue that has yet to be resolved with the Ambarella A7 platform.  This photo illustrates this issue (the Marcus 3 is on the left vs the DOD LS300W on the right).

The Vico-Marcus 3 has a lot of potential from a hardware perspective but the initial performance does not justify the price.  It is not as discreet as we would like, especially the mounts.  Could be a very good camera if future firmware updates improve picture quality and add a parking mode feature.

The latest firmware version can be found on the VicoVation site.  Version 3.2G can be downloaded here as well. 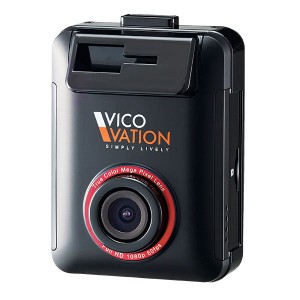 The Vico-Marcus 3 has a lot of potential from a hardware perspective but the initial performance does not justify the price.