On updating to the latest firmware v3.5.2.27 gave me options to increase the snap shot video length to a welcome 20 or 30 seconds which it does and a
'battery protection for parked vehicles' setting that cuts power after setting a preset period of time .

Power is from a permanently live cigar lighter socket , I did previously try a Ddpai hardwire kit but more on that later .

The camera switches off perfectly for the specified time , however it does not wake up again with a G shock or starting the vehicle .

It only wakes up with unplugging cigar and plugging back in , I assume also this would work with the micro USB unplugging / reconnecting .

As some illustrations from Amazon and Ebay sellers suggest . 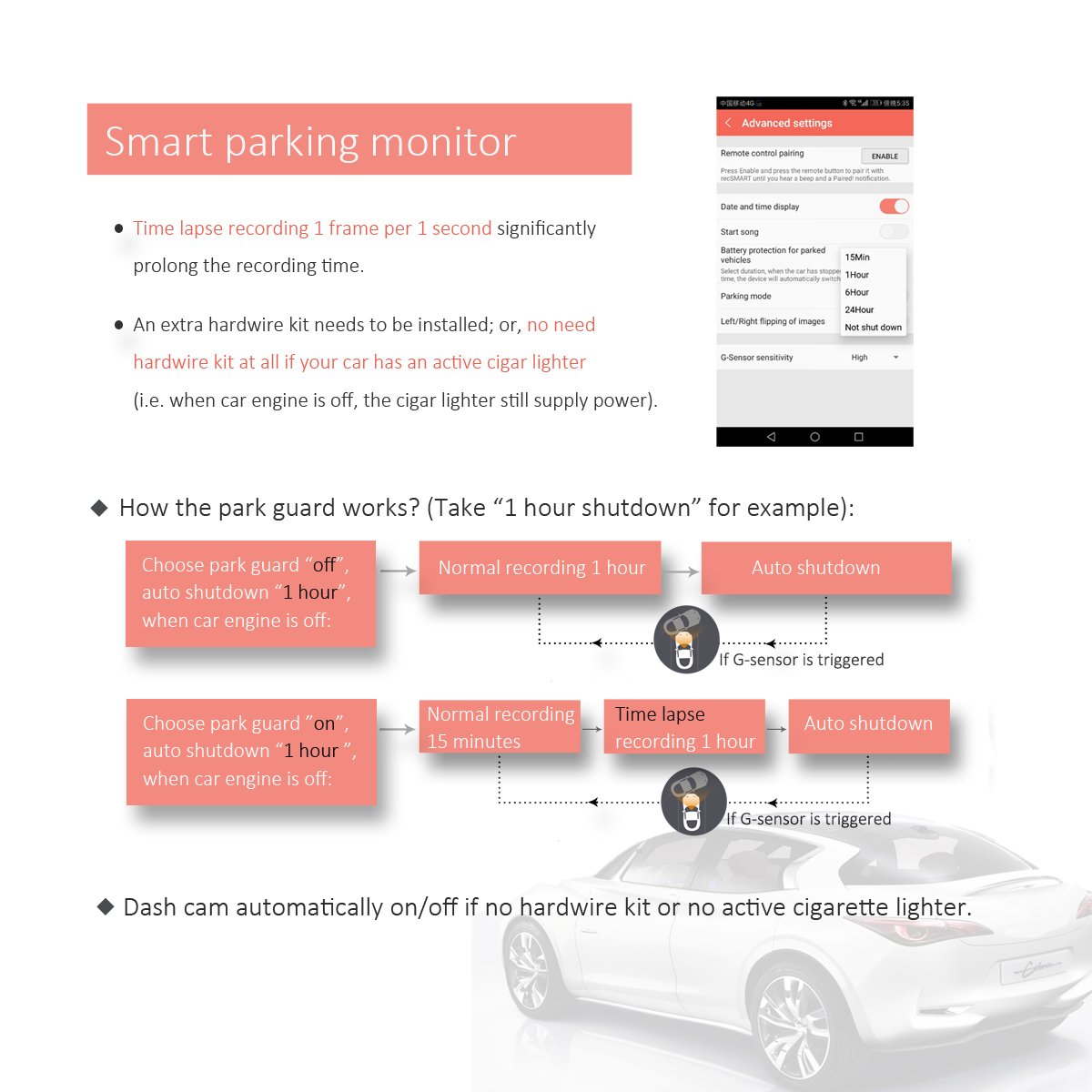 Confusingly this illustration is not on the Ddpai website for any of it's camera's , has someone made it up !?

I've asked the sellers where they got it from and one simply replied they copied it from Google , Ddpai themselves
( feedback@ddpai.com ) , as some will know Ddpai answer promptly and politely but never actually directly answer the question , perhaps they should enter politics !

All they said was to when it's recording hit the camera to trigger G shock and file lock and if it didn't to get a refund .
They're thinking I'm talking about normal parking mode which I'm not .
Nothing either about the illustration or battery protection auto shutdown mode .

So in it's current form I set it to not switch off and just pull the cigar plug if parking on the relative safety of the driveway rendering the vehicle completely camera unprotected .

If re-hard wired this wouldn't be an option as a switch would have to be installed or I awkwardly disconnect / reconnect the micro USB as it's at the very top of the windshield against the headlining delightfully showing no wires whatsoever .

Ddpai hardwire ! Well I bought the correct kit with the right angled micro USB when it was running on the previous v3.0.5.10 firmware as some have observed it didn't have the advert displayed inline fuse so a fuse tap was added , everytime the car was started the camera powered down and then rebooted not getting footage for up to a minute later up the road .

I gave up on this and reverted to the permanently live cigar socket with no cutting of power , the whole Ddpai hardwire kit is pretty useless as no inline fuse and voltage protection cut off is too low at 11.6V .

I ordered some parts from amazon and will try this setup. With ignition ON camera and battery would be powered from 12v outlet. Once engine is OFF I hope battery pack would take over to power camera