That is why i would always let another part dig his own grave, and on camera would be nice.
I am telling nobody about my cameras, but i will share footage with the insurance company.
OP
M

With the exception of the Toshiba 32, they're not actually that old and the 32 is probably only 2-3 years old now. I suppose that's a while in tech-land but at the same time I don't cover many miles - maybe 7k per year.

Here's a link here to my card : https://dashcamtalk.com/forum/threads/fake-sdcards.36509/
OP
M

Interesting. How would you test as I have various methods.

I could put a micro sd card in to its big adapter (I forget what they're called but they generally come with them in the package) and plug direct in to my laptop which has a reader for this inbuilt.

I have one of them 10 in 1 reader things which connects to the motherboard on my pc with a faceplate on the front and I can insert the micro sd card direct to the relevant slot.

Or I have a cheap USB pen like drive that has a slot which I could then plug in to USB 2 or 3 port.

The Toshiba 32 was supplied by the dash cam installer. All other Toshibas came from ebay.

The transcend and I think also the Samsung came from Amazon.

I test mine via a USB3 card reader and via a PC USB3 port.

Do not use USB2 as they are too slow.

I use Speedout 0.5 as that's fairly quick.

Kremmen said:
Do not use USB2 as they are too slow
Click to expand...

They are slow, but they do work, so if you are not in a hurry then a USB 2 stick is OK. 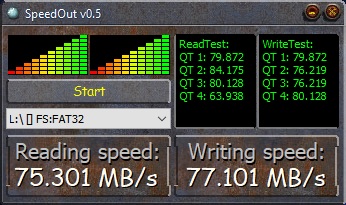 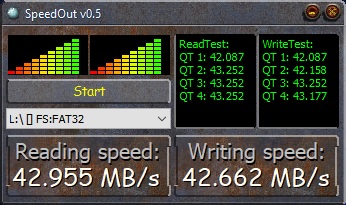 = don't test SDCard speeds using anything other than USB3
Click to expand...

Interesting. I just tried this out on the Toshiba 32GB card I have.

Plugged the card direct in to the Akasa all-in-one card reader in my PC that's connected to the motherboard.

I then plugged the exact same card in to a USB stick that has a card slot on it. Now this stick was real cheap but I noticed it says USB 3.0 on it. Whether it is or not I didn't know. I then plugged this in to the USB3 port I have but since the tower is under my desk and it means getting on hands and knees and sliding the tower forward and then looking at the rear with a light, what I have is about a 1mtr USB 3.0 extension lead - so i plugged the USB drive card reader in to this extension lead. Whether that drops any speed or not I don't know.
But this was the result of that:

What speeds should I be looking at for a dash cam?
Obviously the higher the better but what is 'good' and what is considered 'bad'?

Fast enough write speeds are not always enough, on the write side i always had ample of headroom but i have still hit the wall now and then.
All the cards i tested in the Zenfoz T3 was all plenty fast, some also working for other testers, but my camera still stopped recording now and then.

Though the small memory cards i use for updating FW, well they are only HC cards and pretty slow, but never had a update go wrong or had a camera error when it start recording as normal after a FW update.

kamkar said:
Fast enough write speeds are not always enough, on the write side i always had ample of headroom but i have still hit the wall now and then.
All the cards i tested in the Zenfoz T3 was all plenty fast, some also working for other testers, but my camera still stopped recording now and then.
Click to expand...

the problems won't be related to card speed though, just poorly sorted firmware

Yes, that cam was something else, normally the cameras i have tested over time have been pretty cool with the memory cards i have thrown at them.
And i have cards ready if someone launch a really demanding camera system, and if thats not enough i am ready to invest more.
You must log in or register to reply here.
Share:
Facebook Reddit Pinterest Tumblr WhatsApp Email Share Link
Top