I picked up an LK-9700 Type-D with an extra DC cable from Calgary Dashcam, wanting to avoid green-sum and the pains of international shipping. To their great credit, Rob from Calgary Dashcam called me back _immediately_ and is working on solutions to the problems below.

The box came OEM-sealed, but the GPS in it has a long wire and a micro-USB type connector, rather than being built into the base with a short wire. The GPS plugs into the OBD port, or it plugs into the OBD reader at the OBD port -- in other words, you have a GPS receiver next to the camera, it goes along the edge of the windshield, down the A-pillar, into the dash, and to the OBD connector, where it connects to the camera at the OBD line and the signal is then read back up the wire parallel to the camera. Seems like a silly system, but that's the way it's built.

The OBD connector itself (LK-750) has a wire that goes off one side back to the camera, with the GPS-in right beside the wire-out. Unfortunately it is not physically compatible with my 2011 Subaru Outback as the wire goes off on the side of the OBD connector closest to the nearest obstacle, too close to connect without crimping the wire.

So with no GPS or OBD connected, I used the three-phase cigarette lighter adapter I added to the order (not included in the box) and turned it on. It flashed blue for a moment on the LED on the back next to the screen. The large blue LED on the front also flashed for a moment. The screen never showed any attempt to come on. The camera went off completely and seems to be bricked with no apparent recourse. Ever since, the back LED flashes purple once when powered on and does nothing further. Bad start to its new life.

Does anyone have an unbrick image for an LK-9700 or have any other suggestions for getting this back running rather than having to mail it back?

I am baffled. I have the 9500 w/o OBD and the only difference between the 9700 with OBD is the circular polarizer. My device was professionally installed and the GPS is built in the unit, pretty much. It's part of the upper housing that connects to the windshield mount. I also checked Luka's website and the GPS is built in. There's a pic of it if you scroll down the page:
http://lukashd.com/dashcam/product_info/blackbox_9700duo.html 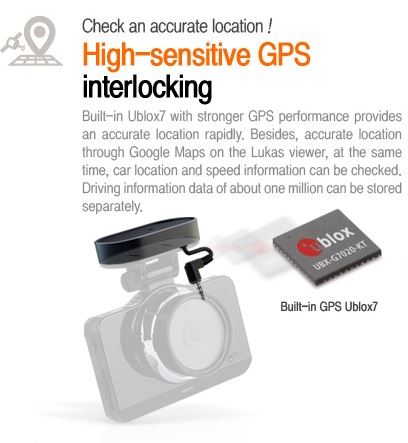