On the system i use for side view on a pretty flat fixed window on my rear doors, i actually have a lot of reflection going on, which i noticed by chance after having a white T shirt thrown on my rear seat for a while and then driving around with that, and then seeing the footage.
And the K2S systems cameras / lenses i think are even closer to the glass ( not that i think it worsen or better the issue )
My rear window are also pretty flat and vertical and at night i can also see the light of oncoming cars headlights in that cameras footage.

I dont think it is easy to fix reflections in cameras mounted on such flat vertical surfaces, you have CPL and that take the worst of it, but thats is not a option on my side cameras as they are so small you dont have room for a CPL, at least i dont think there are that option now.
But it is not like reflections ruin it all, i dident really notice it before i had the white shirt on the after all pretty bright grey fabric of my seats. But like with many things, if you really want to see stuff, you also will eventually.

And i am also planning on moving my DR system to the same side windows some time down the line, and not just cuz they have a option to do CPL.
M

Thanks so much for your switch and Streetguardian 3 fps parking mode idea.
At least some one is thinking like me.


Several years ago when I set up, I was originally going to use this illuminated switch on this mounting block below; very similar to your photo above really.
However, later I dropped the idea, because I did not want to have the hassle of cutting a 25 mm by 15 mm rectangular slot through my central console etc.
Hence I used a home architrave switch on an architrave mounting block instead in Post #128 above. Attached by either Velcro or double sided mirror tape.
I used a round rocker switch (much easier to make a round hole instead of square or rectangle) and put in one of the unused dummy blanks in my dash. also I did not ground the switch ground wire as I did not wan the little built in LED light to illuminate.

Can you and/or jokiin confirm if this will work, and fool the DR into thinking that the car is continuously on?
Go with whatever anyone else/Jokiin suggests as I am only a novice

The way I have set up, when I switch the engine off, all the dashcams will simply power off, unless I switch on the Cellink Neo battery pack.
Do you know where I can find out more detailed information regarding the SG9663DR's numerous parking modes?
The website doesn't provide much details about the parking modes.
It only says " Parking Mode Hardwire Kit included".
Or the DR just records at 3 fps with no audio???
No audio at the lower fps and my correction it has 1,2,5 or 30 fps.

Unlike SG9665GC + SGZC12RC + SG9663DR, two pairs of SG9663DR's will have much lower power consumption during parking, not only because there are only 2 dashcam units as opposed to 3 dashcam units, but also because of the DR's 3 fps parking mode which uses much less power than 4 dashcams recording at 30 fps for much longer park recording times from my Cellink Neo.
Actually the DRs in parking mode has the choice of OFF; 1fps; 2 fps; 5fps; and 30fps. I have not tried the 30fps in parking mode to know if it will also record audio, but in 1-5fps it does not record audio. Jokiin says yes audio on 30fps.

Finally, I wonder if the DR mounted to the vertical rear side windows, is there a window glass "reflection" on playback?
Because if there is, I would like to immediately purchase a 2nd CPL filter with my order.
The DR comes standard with only one (1) CPL filter.
Can the SG9663DR even attach to the near vertical rear side windows in the first place?

View attachment 52611
I would say you could mount it here on vertical. My rear window on my truck is vertical and it has no glass reflection at all. Not to sure if the camera will like to be getting jarred so much with the closing of the door. All I can say is go for it.
Click to expand...

You will want to use low bitrate always recording, i had my doubts, but even at low bitrate i can still capture Danish plates on car passing by my curbside parked car on a 60 km/h road.
Low bitrate also have sound, to me thats important, cuz if some one ding my car and i hear " well he deserve it he is a idiot" uttered, then i sure as hell is going to get them, otherwise another scratch or ding in my little 2012 car dont bother me muuch, when it go it will be as scrap iron towards down payment for a new car.

Installed mine today. Hid the control unit in my top glove box which worked out well.

Thanks jokiin.
I received your SG9663DR with the premium WD Purple micro SD card package yesterday.

Later today, when I get a chance, we will go to Jaycar to purchase a 12 V cigarette plug, and simple crimp wire connectors below.

My FIL came up with a better idea of leaving only 15 cm of red and black cable running off the 12 V cigarette lighter plug.
We then cut the two fuse taps and C-shaped connector end from the SG9663DR's three input cables.

He then feeds the 12 V cigarette plug's one red wire into the input end of one connector, with the SG9663DR's red and yellow input wires twisted together going to the output end of the same connector.
The second connector is used to connect the cigarette plug and SG9663DR's black wires.
Thus, this technique is faster, less labor and only two (2) crimp wire connectors are needed.

jokiin, if a 12 V cigarette plug with red and black wires are connected via two separate connectors to the input power of the SG9663DR, is it safe to twist the SG9663DR's red switched and yellow constant input power cables together, and insert that into the output end of the power input connector???

This is what my father in law did.
He used only two crimp connectors.

For safety, I have not yet plugged the cigarette plug into the car's 12 V socket to power the dashcams yet.

Also, from left to right, the slide switch in the SG9663DR's power supply seems to be four voltage cut off positions?
What position should I set the cut off voltage at if I'm connecting to a 12 V car socket?

Thanks for your help.
Everything in the post #146 above works beautifully.

not really following your description, maybe if you get your father in law to draw it out might be easier to understand
P

I think what he proposes is:

BLK to grounded shell contact of ciggie plug
Yellow to center of ciggie plug (always hot)
Red to fuse tap at fusebox (switched by ign.)
Which should require no further grounding of the HWK black wire since it's grounded at the ciggie socket.

black goes to ground, not the fuse box, where's yellow?

your setup is not straightforward since you're using a cig plug and a Cellink with a switch between them so I'm really not sure, might have to put some faith in your father in law on this one
P

How is this?
This is a better diagram below.
I have drawn in the yellow wires to the DR.

Like SawMaster, my FIL proposes that the first diagram is unnecessary, and the second diagram is all that is needed.
Are they right? Just double checking only.

I think go with what your father in law suggests

It seems that VHB tape is not good for things that may move around. I have my DR in my glovebox, which is the type that entirely hinges out, and have tried several options to stick it to the insides. 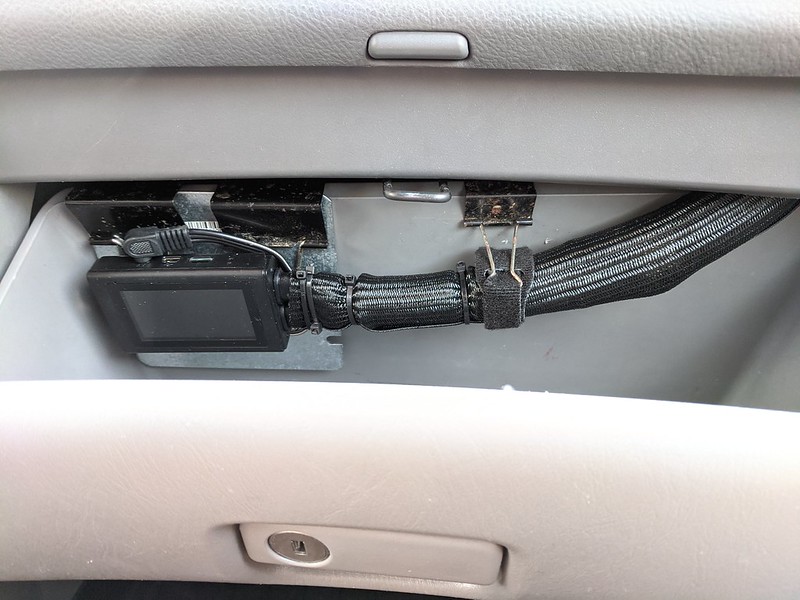 I'll probably keep my glovebox locked at all times.

The dual lock tape is more suitable for this situation
P

badbob001 said:
It seems that VHB tape is not good for things that may move around.
Click to expand...

Have you tried Nano Magic Gel Tape?
It is very strong, and mildly flexible too.
It's meant to be reusable 2000 times, and can resist -16 to 90 degrees Celsius.

peterharvey said:
Have you tried Nano Magic Gel Tape?
It is very strong, and mildly flexible too.
It's meant to be reusable 2000 times, and can resist -16 to 90 degrees Celsius.

Have you any personal experience with this that you can share here regards it's holding power and repeatability in use? It does sound interesting and I can see just where I'd put some to use but only if it holds as well as dual-lock in high heats.

peterharvey said:
Have you tried Nano Magic Gel Tape?
It is very strong, and mildly flexible too.
It's meant to be reusable 2000 times, and can resist -16 to 90 degrees Celsius.

SawMaster said:
Have you any personal experience with this that you can share here regards it's holding power and repeatability in use? It does sound interesting and I can see just where I'd put some to use but only if it holds as well as dual-lock in high heats.

I haven't touched my roll of Nano Magic Gel Tape for a few months, and look at what happened? Not good.
I suspect it may not hold well under high temperatures as claimed.

Anyway, I have temporarily fastened the pair of DR's with Nano Magic Gel tape to the fixed rear window vent glass panes, because the Nano tape is removable so that I can reposition the twin side dash cams to the optimum horizontal angle, and vertical roll angle.
Presently, the DR's cable is also affixed temporarily with Nano Magic Gel tape to the back edge and lower edge of the rear door trim too.

Once the final positioning of the dashcams is ascertained, I will use the OEM factory 3M double sided adhesive to fasten the DR dashcams, while the camera cables will be fastened to the plastic door trim edge using clear silicone and a application gun.

Notice how the cabling with the DR mounted to the left rear vent pane is slightly more awkward than on the right door above.
This could be alleviated if the non-sided USB-C was used instead of the old mini-USB plugs and sockets, but no huge deal.

Now must go for a drive and replay footage to fine tune the position of the dashcams and angulation of the lenses.

I wonder why I did not come up with this idea four years ago with the SGZC12RC?
It has slightly inferior low light video, but for side cameras, we don't need that much low light quality anyway.
I remember four years ago, I kept on trying to mount the RC on the moving [open/close] rear window square glass pane, and this led to thinking about suction cups, hence Vicovation and Dod dashcams that were available OEM with suction cups.
Side dashcams should have been mounted on the rear vent pane glass all along, because these panes are fixed, and cabling to the rear door's vertical edge is easy.