How to wire a thinkware F770 to a Cellink B

I have the hardwired cable with bare Red, yellow and black wires. I have a Cellink B with output cable containing RED, WHITE, BLACK and GREEN wires.

BBMC doesnt have any splice hardware at all apparently so I had to research and order my own MOLEX connector and do my own splice. Here is the rub. The tech emailed me and said to make sure I connected the BLACK to BLACK, RED to YELLOW and YELLOW to RED. See it? Cellink B doesn't have YELLOW. The other two colors are WHITE and GREEN.

That being said; how do I connect a F770 power cable with BLACK, RED and YELLOW wires to a Cellink B with RED, WHITE, BLACK and GREEN wires??? The white wire on Cellink B appears to be ACC as it comes on and off at about 13V with the ignition. The RED is constant at 15V but I am not going to just start connecting wires until I know which is which.

Why is there not a wiring diagram that is readily able to be located??????
N

Giant_JunK said:
I have the hardwired cable with bare Red, yellow and black wires. I have a Cellink B with output cable containing RED, WHITE, BLACK and GREEN wires.

BBMC doesnt have any splice hardware at all apparently so I had to research and order my own MOLEX connector and do my own splice. Here is the rub. The tech emailed me and said to make sure I connected the BLACK to BLACK, RED to YELLOW and YELLOW to RED. See it? Cellink B doesn't have YELLOW. The other two colors are WHITE and GREEN.

That being said; how do I connect a F770 power cable with BLACK, RED and YELLOW wires to a Cellink B with RED, WHITE, BLACK and GREEN wires??? The white wire on Cellink B appears to be ACC as it comes on and off at about 13V with the ignition. The RED is constant at 15V but I am not going to just start connecting wires until I know which is which.

Why is there not a wiring diagram that is readily able to be located??????
Click to expand...

Did your Cellink not come with any output cable at all?
Could you PM me your order number and I'll look into it?

It sounds like the tech was referring to the unspliced 3 wire output (step 3., second picture) 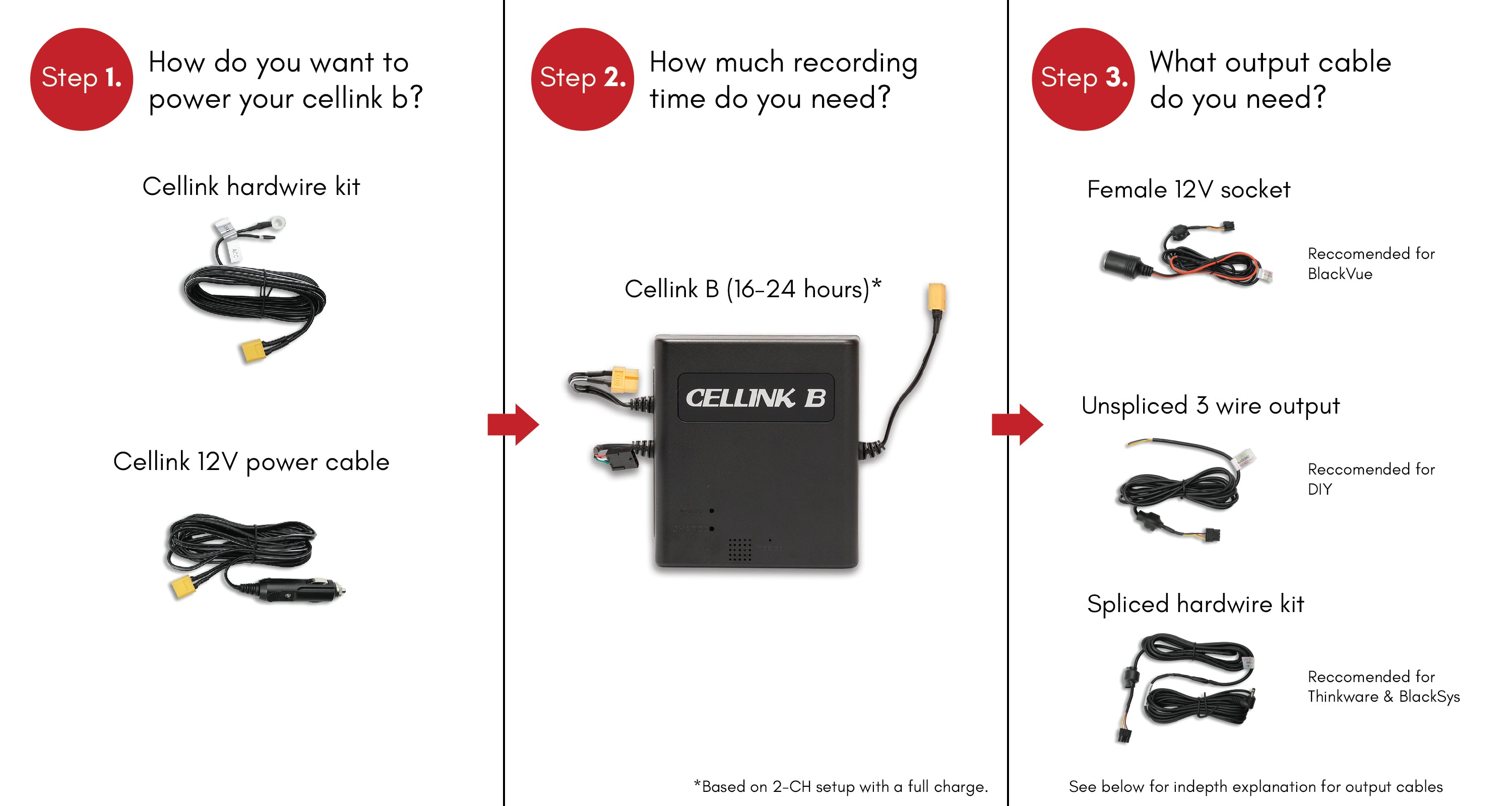 Here's a diagram I quickly made 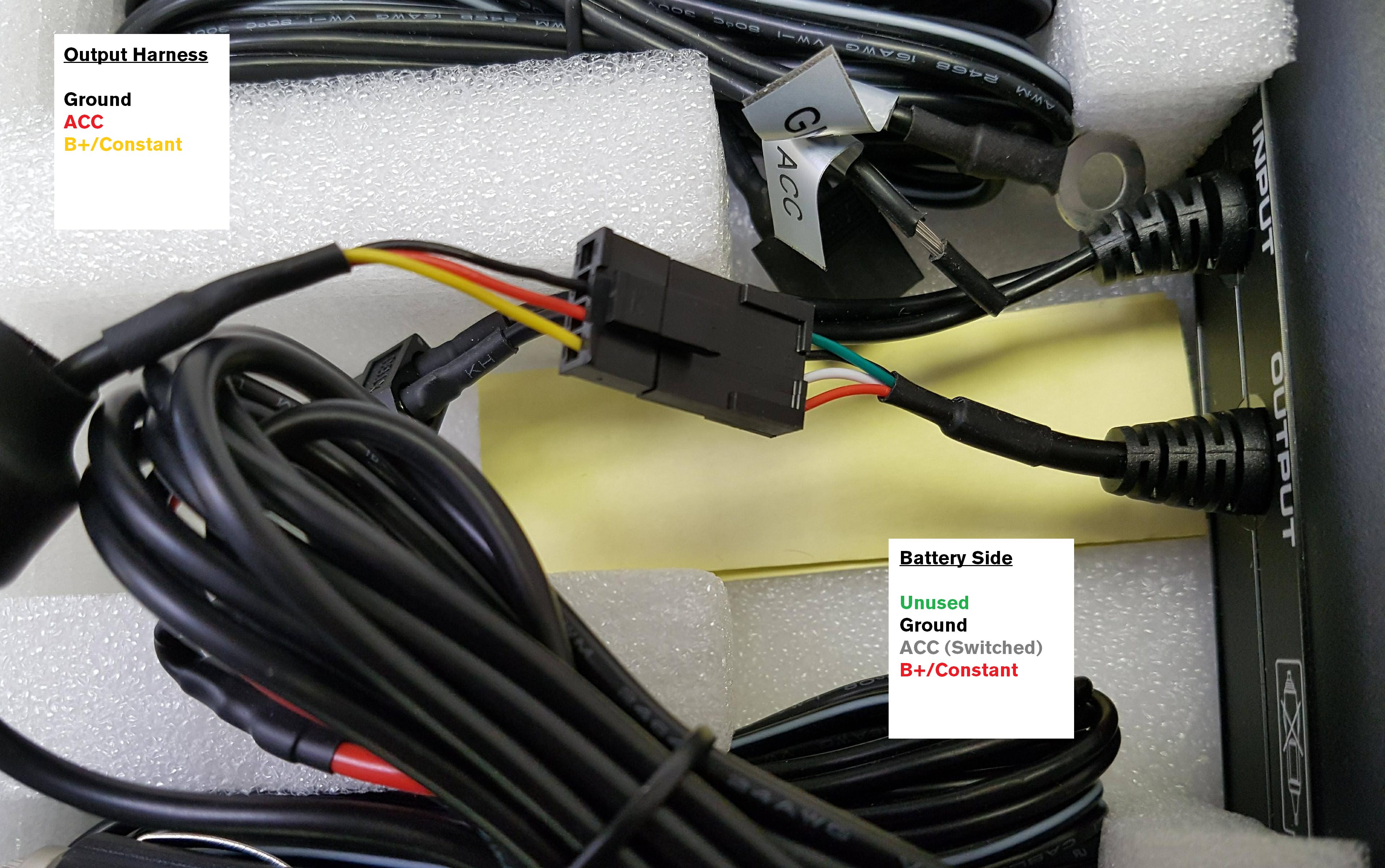 I have the power cable to the F770 it plugs into the side of the camera. The other end that goes to the Cellink B has black, red and yellow wires. I purchased a molex connector and crimp on pins so I can power the camera off the Cellink B. Your tech told me to match black to black and cross red to yellow and vice versa. When I checked him on the fact that Cellink doesn't have yellow he corrected himself and told me to wire it up as shown in pic above, ie red to white. So that is what I did.

Using the Molex crimp tool I correctly crimped the pins on the wires from the F770 power cable and inserted the pins into the molex connector as shown in picture above.

RESULT:
Camera doesn't turn on when I turn the car/ignition on.
With car running and start the camera manually it says starting continuous recording... then after .... maybe 30 seconds says parking mode.
If I recall correctly it wont start at all when car is off.

Sounds like tech told me wrong wiring. Can you confirm.

RANT ON: And to be perfectly clear. I told your guys (at BBMC) in email and on phone that the cellink B did not come with EITHER spliced or unspliced harnesses. I told him I only had power cable from Thinkware and cig lighter adaper from the cellink. I asked if a spliced connector could be sent and your guys said that not only did you not have any; but you also could not tell me the part number of the molex connector. I had to find it myself. No biggie because I have been doing this stuff for a living for over 20 years and found the PN myself in about 20 minutes. DigiKey.

The tech said I could use the wire from cig adapter (destroy it) to splice. I informed him that I was not going to do that and that I will buy my own molex and I just needed to know how to match up the wires from F770 power cable to cellink.

And now here we are. Camera has been installed for a week and I have not been able to use it because of unknown wiring schemes. I know better then to just start "TRYING" different wires. That's the Best way I know to blow things up (in my field I mean that literally), and hopefully that hasn't happened already because camera doesnt seem to work correctly. If I cant get a resolution soon I am about to pack it up and return it because when one spends $700 on the system the friggin thing should install itself. I shouldn't have to call five times and have ten emails go back and fourth before I get the correct answer.

If I am forced to wire it myself like I am; the correct damn info should be readily available. That info was not supplied in the boxes, I was not able to find it on the BBMC web sight and seems tech support may have provided incorrect info.

Now, that all being said, do I need to switch the red and yellow wires? Because the behavior of not able to start manually when car is off makes it seem like ACC is wired to power and vice versa. But what do I know. Frustrated! When I first installed it I used the cig adapter and both cameras seemd to be working fine but it was, as its supposed to be, always in continuous mode. I was able to get wifi connected and everything. Now, I cant do nothing because right now F770 wont start when car is off, I have to start it manually when car is running but then it goes into parking mode it kills the wifi.
Last edited: Oct 28, 2017

Yea I am thinking that as well. Unfortunately though I don't have the pin removal tool. I have the crimper but I didn't plan on having to wire this more than one time. I suppose I could drive back to work this weekend and grab a removal tool and do it right in the parking lot. Phht. What a hastle.

EDIT: Solved. Switched the red and yellow wired on my F770 power cable around and now it is working as it should be.

Correct wiring for me was F770 Black to cellink Black, F770 Red to Cellink Red, F770 Yellow to Celling White.

I almost feel bad for letting these guys have it but damn what a cluster fak. And for them to send me emailed written instruction that were blatantly wrong is seriously messed up. In my field, I make a mistake like that and people could end up getting killed. No excuse for this as I couldn't have been any more clear then how crystal clear I was about having no unspliced OR spliced cellink cables and having a F770 power cable. If you don't know or there is a question because at "some" point Thinkware switched colors then you tell the customer to verify the cable.
Last edited: Oct 28, 2017

It sounds like you are missing a piece with your Cellink hence why I asked for your order number to confirm what you received.
The problem is the unspliced output cable (#2 in the diagram below) has the colours reversed again where red is ACC, whereas from #1 red is B+

I spoke to our rep who helped you and he says he initially gave you the wiring instructions assuming you have the output cable #2 that is typically included with the Cellink through email.
But afterwards you guys went through over the phone how the colours of the Cellink (red, white, black, green) corresponds?
In which case it would just be a matter of matching up that to the tags on the Thinkware's hardwire kit from #3 to #1 directly and bypassing #2

Yes sir. You are correct. My cellink did not come with anything but the female cig lighter adapter. Its all good. I did have to destroy a perfectly good and properly assembled molex connector but thats ok because that $0.70. Plus I always order extra hardware. Shipping cost are 5x hardware cost anyways so of corse I have more. That being said I just cut off the molex and used a needle nose to crimp on new pins and conn. When I get to work I will again cut off the connector and use the crimp tool to properly install a new molex. Or maybe a TE connectivity of the same ilk. both works the same.

BTW PN for the connectors on DigiKey that will mate with the output molex from the Cellink B are :

look at bottom of the pages for the appropriate contacts; and also the/a male housing similar to if not exactly the same as (Cellink B output side). The page will list several different contacts and all will work just fine. Contact pages will show you the crimp and removal tools. You can even install gold plated contacts if you want.

The contacts CAN be effectively crimped/secured with fine needle nose but REQUIRES stripping the wire. I used my Leatherman Wave. Pro tip: The hard wire cutter on the L.W. can work as a wire stripper. However, The proper crimp tool makes life simple and is worth its weight in gold if you do this alot. Problem with needle nose is that you tend to mis-shape the contact and it doesnt want to seat properly in the housing.

Pro tip. With the proper molex crimp tool you dont even "NEED" to strip as the tool will fold the metal THROUGH the insulation and into the conductor making the electrical connection via friction contact. Disclaimer: I believe some if not most crimp contacts do specify stripping the bell area. AS ALWAYS: LOOK AT THE DATA/INSTRUCTION SHEETS. They are listed on the webpage. Im just sayin... if you have a crimper and dont have a stripper... jam the wire , insulation and all, into the contact, and crimp it. It bites righ t through to the conductor.

Next pro tip: I usually goop up the back of my molex connectors with clear RTV as it adds strain relief and prevents debris from entering the back of the exposed molex. Under car seats get very gritty and stuff WILL enter your connectors. Or just use some electrical or stretch tape around the back of the molex to seal up the openings. But electrical tape gets greasy, smeary, goopy when hot. RTV is only greasy, smeary and goopy while drying. Afte that... its worth its weight in gold for preventing debri from entering backshell and preventing wire breakage from YEARS of flexing and vibration. Werd.
Last edited: Oct 28, 2017

Thanks for that link! We haven't had to order any in but if someone were to damage one of these connectors your link should come in handy!
You must log in or register to reply here.
Share:
Facebook Reddit Pinterest Tumblr WhatsApp Email Link
Top