Memory cards working with the A139

Rules:
Card must have been tested for at least a month in the camera.
Card must have filled up several times.
Card must be vigorously inspected for file structure and integrity, at least 1 time.
Please provide a small but readable picture of the card in question.
IF !! you have bad experience in this camera model with a card others have found good, please do post this.

1. The factory viofo card, i have tested with the 128 GB model and it worked fine of course.
No picture.

2. The Toshiba Exceria ( older model ) i have run this 128GB card for over a month and it have filled up several times, if have been inspected 2 times and fully formatted one time, and no issues was found.
This card do not have warranty if used in dashcams.

Had this card in the A139 since the camera came, never had issues with file continuity or playability. Formatted 2-3 times in-camera, final check in PC two weeks ago says card is fine. Swapped out for a 128GB Sandisk High Endurance. No report on that yet.

Samsung Evo Plus 128gb working fine from day one in mine.
OP

Okay a little before time but i have actually used this card a week or so before this stint, so it have seen a month of use in the A139 at least.

This is the Adata Premier pro, which do have warranty when used in dashcams, and the MAX size for this model are 512 GB

I have seen no issues running this 128 GB card.
S

Paul Iddon said:
Samsung Evo Plus 128gb working fine from day one in mine.
Click to expand...

Samsung EVO Select 128GB from Amazon (same card as above, only relabeled). Perfect function in higher heat at max bitrate
Also used this card in 64GB size for about 3 weeks with no problems.

First I need to determine if this SanDisk high endurance card I bought is faulty or not compatible with connecting to a computer.

Please see this picture where I used the Blackvue card which came with the package I bought from BlackboxMyCar. It’s only 32gb though and of course I wanted way more so I bought a high speed SanDisk 256gb card which I believe is the largest capacity the camera will take (correct me if I’m wrong).

The SanDisk Works when inserted in the actual dash cam and connecting to the WiFi through the device sitting in my vehicle. But my iPad (and a friend’s laptop I tried it on) doesn’t detect it but Does detect the Blackvue card. If the dash cam itself is storing the footage on the SanDisk card I don’t know why the footage wouldn’t be accessible when connecting it to my iPad and also trying a laptop. The laptop gave an option to reformat the card so I did so then put it back in the camera to record some footage and tested again. No dice.

Is my only option to buy another micoSD card that will work (in terms of being able to see the video) when BOTH inserted in the dash cam And when the card is taken out and connected to an iPad or computer?

Something doesn’t seem right that it work in the device but not on a computer when I want to connect to view or transfer footage.

Thank you for any help! 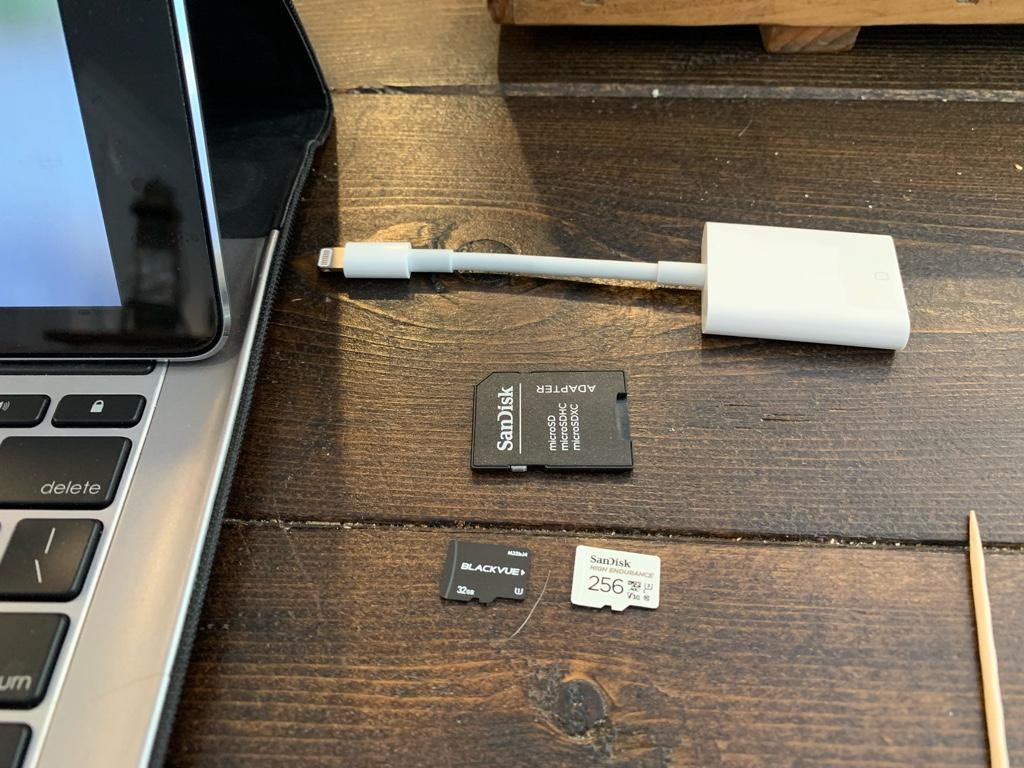 I use the same card in my camera and have had no problems with using it on either of my computers using various card readers.

Okay here is my next contribution to this thread. The past month i have been running the Kingston canvas Select plus card in the A139.
Today i looked it over for the #3 time in the past month, having data ( regular driving files ) on the card going back to May 25, so the 256GB cared have filled up a few times at least ( started use May 1 )

I have found no issues using this card, no camera messages, and file integrity and file order are fine

Interesting additional info in regard to large memory card, which anyone using parking guard should have, no matter the kind of parking mode he / she use.

This memory card do not have warranty for use in dashcams.

Yea, probably somewhat obvious, but the Sandisk High Endurance 256GB card does work. I'll second that one. Would be nice to see some 512GB users. I am all for storage. My PC has over 20TB's - and I could always use more

Montana Actual said:
My PC has over 20TB's - and I could always use more
Click to expand...

When it comes to computers you can never have too much storage, too much speed, or to much memory and in the case of networks/internet too much bandwidth.

I have been running the same Samsung Evo Plus 128Gb on all 4 dashcams and it has never failed.

I have rarely formatted it. I just cut/paste from the dashcam to the PC after about 4 hours of footage using the dashcam indoors as a card reader so I'm not continually ejecting the card.
K

Montana Actual said:
Yea, probably somewhat obvious, but the Sandisk High Endurance 256GB card does work. I'll second that one. Would be nice to see some 512GB users. I am all for storage. My PC has over 20TB's - and I could always use more

When it comes to computers you can never have too much storage, too much speed, or to much memory and in the case of networks/internet too much bandwidth.
Click to expand...

I couldn't recall how much space I had, but your convo encouraged me to go look. Can never have enough.

Back on topic though, has anyone tried a 512GB?

So i have conclude a month of testing the WD purple in the camera, this is the old version with U3 / V30 performance ( WDD256G1P0A ), the newer cards have QD101 written on them but they are slower U1 / V10 cards so something to be mindful off.
These older versions apparently are no longer listed at Western digital, i could only find the new QD101 branded models. https://shop.westerndigital.com/products/memory-cards/wd-purple-microsd#WDD032G1P0C
Aside for problems relating to parking guard which i am sure are not related to the memory card it have been a successful month of testing the A139, not a single beat dropped by the WD card.

I have found no issues using this card, no camera messages, and file integrity and file order are fine

Which bitrate do you use in menu? Can this card support recording video from 3 cameras with maximal bitrate?

Zaxela said:
Which bitrate do you use in menu? Can this card support recording video from 3 cameras with maximal bitrate?
Click to expand...

Yes, I always use the maximum bitrate on my cameras. I do not live in a hot country.
H

TonyM said:
Yes, I always use the maximum bitrate on my cameras. I do not live in a hot country.
Click to expand...

Generally, Maximum Bitrate doesn't matter even in a "Hot Country". Because the camera is run at this setting while driving, meaning the windows are open or air conditioner is on during hot days. I doubt most people are hot boxing their car.

O yeah. my little car is like a F2 tornado when i drive on a summer day, i must say i do miss the aircon in my previous car.

I would never run a dashcam at anything but the highest bitrate, and i will suggest other people do the same.

I've been using Samsung PRO Endurance 128gb since end of may with 2ch in A139. After formatting with dashcam no problems since then.
In my daily small trips it holds about 24 hours of active+parking (timelapse 10)