This will be one of the most vivid lessons to be learned from this pandemic when history looks back from the future. I imagine that Wuhan probably has a nearly equal population density (at least at it's center) so that can be compared as what happens with a widespread infection ahead of a strict lockdow (which is seemingly quite effective given the bad situation they had, but requires a longer duration). There are other densely populated places like Singapore and some towns in New Zealand where the lockdowns were instituted early to look at as well; those were also quite effective in achieving their desired goal. And for now it seems that the earlier the lockdown is implemented, the shorter it's duration needs to be to maintain it's effectiveness. But NYC had neither an early nor an effective lockdown, and the results have been bad and are continuing to be bad with no ending in sight.

So far it's clear that diseases like this can be limited if not completely controlled by lockdowns, and from there you can choose any of the courses to go forward with. What cannot be done is to have all your choices open (or any choices left at all) when something like this becomes pervasive and widespread before control measures are attempted. It's a very simple logic which I've been espousing from the very beginning of this. And since you cannot otherwise know the rate of infection, widespread testing has to go along with the lockdowns at least to the degree it takes to be relatively certain that you're not leaving out a person or group who will go out and infect others after the lockdown is lifted. We have no effective control methods at this time except exclusions and lockdowns so whatever other effects they bring must simply be accepted. The only other viable option is to do nothing, in which case deaths and permanent disabilities will be the highest rates possible along with the economic hardships that brings.

What happens after lockdowns is another thing altogether, and again will be learned well in time. We're going to have many diffgerent examples to study but somehow I just don't think that there will emerge any better solutions than early strict lockdowns when the end numbers are counted.

Around 220.000 Danes are home on full pay now, the cost for the Danish taxpayer for corona are as of now 207 billion Dkkr, and i think our GNP are 1000 Billion
Also the people home + the 46.000 or so that have lost their jobs due to corona + all the "cant bother to work", well of the around 6 million Danes only around half of them are working at the best of times, so about 1/4 million people not working, that's some chunk after all.
The Danish economy are set up to take a +5% hit this year, that's more than the worst year in the financial crisis of 2008.
And everyone are also full steam ahead on the green wave, carbon emissions in Denmark are supposed to do down with 70% in 10 years and no fossil fuels in 30 years. and a range of major companies have just said they will build a hydrogen plant ( power to X ) where the plan are to make 250.000 tonnes of fuel every year from hydrogen split with wind power, and CO2 scrubbed of chimneys ASO

So "soon" you can get on a plane at Copenhagen airport and go on holiday flying on "wind" power from one of the proposed offshore wind islands that will be build in the north sea and the Baltic sea.
Seem like the plan are to be leaders in power to X, as we sort of have been on wind power.

B P and Shell are so going to hate us, even if they will probably still have plenty of people sucking the oil tit by 2030 / 2050

kamkar1 said:
B P and Shell are so going to hate us, even if they will probably still have plenty of people sucking the oil tit by 2030 / 2050
Click to expand...

Outside of Trumpland, the oil and gas giants have seen the end of fossil fuel, they are looking for ways to invest in the new technologies, partly because they have been forced to do so because the supply of investment money for fossil fuels has dried up. The investors don't believe they will get long term returns from any new projects, while wind is a safe long term investment.

Meanwhile in Trumpland wind is struggling to get started:

The “stunned” developer of the pioneering Icebreaker Wind project on the US Great Lakes said a consent condition added by local power officials could prove fatal to the project’s viability. A condition added to the Ohio Power Siting Board (OPSB)’s approval of the project that turbines should be shut down overnight for most of the year “renders the project economically not viable”, said LEEDCo, which has spent years planning the six-turbine Icebreaker offshore wind farm in Lake Erie, Ohio.
Click to expand...

Well done Twitter, nobody else in the USA has done the right thing, not even the rest of the government or legal system has stood up to him! Having the president threatening to shoot his own people should have other people taking action though? 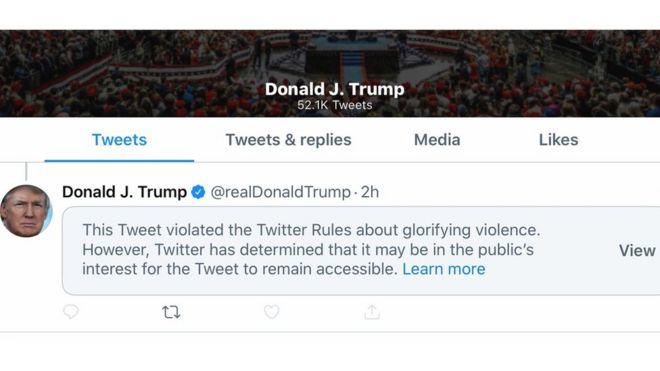 well thats not quite true, aparently even newspapers normally favorable of his party are starting to question the guy.

Nigel said:
Well done Twitter, nobody else in the USA has done the right thing, not even the rest of the government or legal system has stood up to him!
Click to expand... 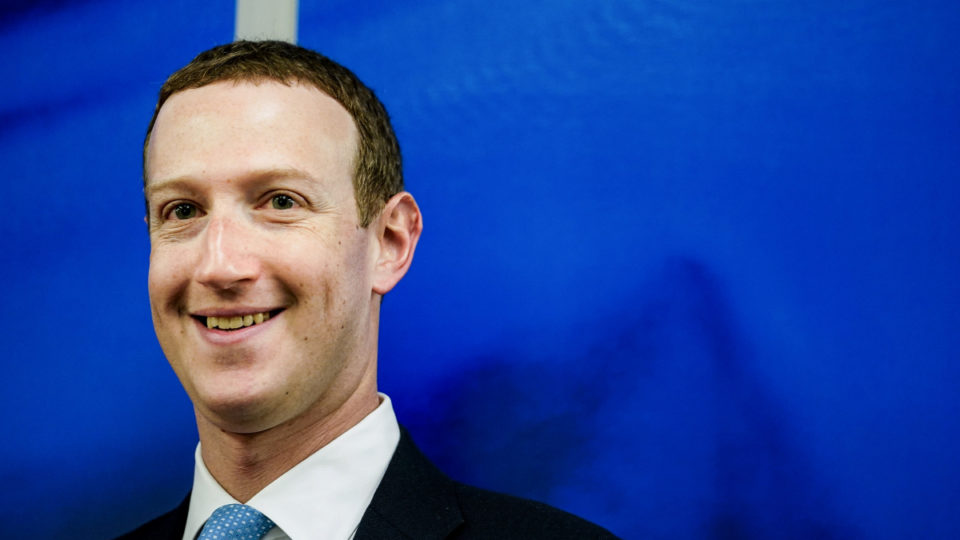 Also i dont get twitter flagging the guy like that, though i am no fan, but arnt he just stating the fact.
Not quite sure how the law ware in that state ASO, but as i understand defending your property even with a gun are not uncommon in the US

He do say he will bring in the national guard, but thats not like saying i am going to shoot you. It might well lead to shooting, but that's a whole other matter and it might well start with someone taking a pot shot at a national guard man / woman.
I simply do not get social media on this, and it is one of the factors i urge people to stay away from such platforms.

twitter has (until now) pretty much allowed anyone to say anything without any checks and balances, constantly a lot of misinformation there

If they should focus on something, it might instead be the persons that cut,,,, and molested some horses here last night.
I have no idea what kind of human waste would cut a horse in the face and other parts of the body including genitals, but things like this actually happen every year now. 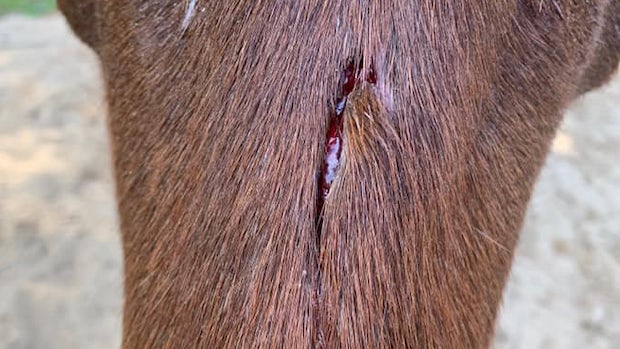 And now true to form, he's signed an Executive order to have all his minions do what they can against Twitter, and he's pressuring his Congressional minions to change the law regarding how social media sites handle things like this. A megalomaniac with a "God complex".....

I don't think Trump understands that Twitter is a private company who have the right to do whatever they please with the content which users place there. In fact that's exactly what users agree to when they accept the TOS and join. So Trump agreed to allow Twitter tio 'police' his content and now that they're doing it he's crying "foul".

The solution is simple: If you don't like how Twitter functions then either don't join it or remove yourself from it. Nobody has any right to tell them how to run their company- that is the difference between Freedom and Communism where private entities can be government-controlled. Oh my, how very inconvenient that bit of truth is

kamkar1 said:
He do say he will bring in the national guard, but thats not like saying i am going to shoot you.
Click to expand...

Seems like a clear message that he is preparing to shoot looters. Of course it might be a lie, but how would we know that!
Normally the police deal with looters, you would only send in the national guard if you did intend to shoot them.

The question of if it should have been censored is a different issue, and one the USA needs to work out for itself. Many other countries would not have allowed their president to say what he has been saying, but they would have been taking action against the president, not against Twitter! Twitter should do what it thinks is right for its customers, its country, and the world since it is a global company. It could always move out of the USA if Trump takes action against it!

I think the police have already lost that battle in Minneapolis, i saw a police car get trashed with a cop inside it, he barely got away with just a few broken windows.
in that case i think it is the norm to deploy the national guard, like so many times before, but i dont think of those guys as some hit-squad.
TBH i cant recall the national guard shooting a great many people in other cases where they have been deployed.
I actually argue that we Danes should deploy the army in some places of our country, cuz it is very clear that the Danish states monopoly on violence have been broken in those areas, so if police show up they get stoned and have to run.
Also several politicians ASO need to have a constant guard around them, thats just stupid i say, eliminate the reason why they need to have that, cuz these are just regular people that exercise their constitutional rights,,,,, granted that some living here dont like those rights,,,,, but that can only be that minority problem.

Since the 70's the National Guard has generally been moving away from their troops using deadly force unless their own lives were being inescapably threatened. They are not a "Police" force per se, but can act as such. The real point here is that a threat is a threat, whether veiled or overt, and when it's done in this manner as an attempt to control dissenting opinion it is inherently a very evil thing.

Yeah if anyone should call in it should be the mayor of the town, really the president should not have a say in such matters, and i also dont think he have that much to say, just showboating.
At least Americans can protect them self and their property ( in general ) that is sadly not a option we Danes have, we have the right to call the police and that's about it.


I dont know ! litterally cuz i am a Dane over in Denmark far away, but as i have said before, i have a great many qustions and things i would like to ask / debate with my American internet friends over a cold ( soda in my case ) on the porch.
Last edited: May 29, 2020

I think CNN are on the fake news list for a long while.

he doesn't like anyone that is critical of him

See he taken US out of the WHO now, apparently they was not as hard on China as he would have liked.

On the virus and my country, in a week we will open the borders to Germany - Norway and Iceland, the UK and Sweden will have to wait a bit longer.
And actually while many have lost their job thru this, then 35.000 Danes also got a job under the Corona.

kamkar1 said:
See the taken US out of the WHO now, apparently they was not as hard on China as he would have liked.
Click to expand...