K2 shuts down for no reason/at random

I think we both did

One of the "wisdoms of age" is seeing and understanding just how much of your luck you've already used up, then making sure you do things from there on where you won't need any more luck

USB is not the ideal way to power the K2. But it's working.

I don't know whether Innovv plans to offer a revised power converter ("cube"). I have not established 100% that there is a problem with the existing one - at least, not except on my bike. Mine consistently fails in heat, but it would be good to know if someone else can get it to happen.
OP
D

On further reflection: It looks like I had success with the v0.67 firmware, or rather the "second" v0.67 with the GPS-logging bugfix.

I'll try that one. I could use v0.57 but then the app would complain at me every time I run it.

Innovv has released a special firmware version that performs error logging on the DVR.

If I can get the GPS problem fixed, maybe I'll try this error-logging firmware, together with using the power converter (instead of USB).

Not sure it will reveal anything though. Evidence seems to point to a heat-related fault in the power converter. That wouldn't be captured by logging on the DVR, I wouldn't think. But I can find out.
OP
D

Turns out it helps if you have the GPS antenna connected. Not sure how long it was like that...d'oh.
OP
D

This by the way shows the "shield" I made for the DVR. It's actually just the plastic lid from a can of coffee: 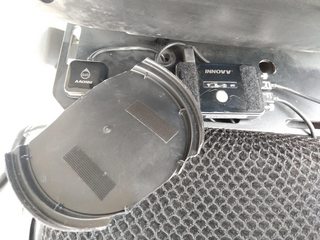 I put some heat-reflecting tape on top to make things a little less harsh on the DVR: 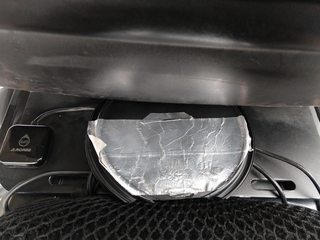 The Velcro is enough to keep the cover from flying off even at highway speeds, yet opens easily for DVR access.

I'm utterly at a loss re: GPS problems.

Rode to and from work yesterday. K2 stayed on under USB power.

Reviewed video after I got home. On the ride to work, I didn't have any GPS data until 13 minutes after powerup. So, only the last few minutes of my ride in covered.

On the way home, no GPS data at all. Roughly the same total ride time - 15 minutes.

All this was with the v0.67 firmware. I started using the "Text input" field within the K2 app to print current firmware version on the videos (e.g. "v067"), so as to forestall later confusion.

I flashed to v0.70 firmware for today's commute. TBD whether I get any GPS data.

I don't understand what's going on with the GPS lately. It's as if I've traded one problem (power) for another (GPS).

You just can not catch a break
OP
D

Today's riding was little different. GPS didn't join the party until I was most of the way to work.

Here's where it gets really strange though

After work, no GPS from the parking lot to the gas station down the street. After getting gas though, GPS all the way home, as it should be.

This is all with a v0.70 firmware, modified for higher bitrate on the front camera. That's the only change made so I wouldn't expect anything different with completely stock v0.70 firmware.

When you say modified i get suspicious, though it is probably not it, you should poke at GPS issue with a mint firmware.
OP
D

I can guarantee you this would happen with the stock v0.70 firmware, because it already did. That's what my new DVR had on it when I got it a few weeks ago. And I saw the same GPS problem.

Also literally the only thing modified is the bitrate for the front camera. It now records at 20 Mbit/s for drastically improved image quality. This is useful for making out license plates for example.

Rear cam is left at the default 12 Mbit/s since front plates aren't a thing in my region and so it's worth saving storage space.

I have a 256 GB SD that I've been saving until I could get the K2 operating reliably, and could be sure it wouldn't fry the card as happened that one time with my old 128 GB card. I believe I can now use the larger one with confidence.

It would be nice if the power module worked as advertised, but I've given up on that. USB power from now on.

It would also be nice if the GPS logging worked, but that also seems to be too much to expect.

I’m not aware of any other Intermittent GPS issues out there. It’s another mystery for sure. anytime we’ve replace GPS in the past it fixed any issue. I have spares if you want to try another one. Sounds like an intermittently connected wire somewhere
OP
D

OCD Tronic said:
I’m not aware of any other Intermittent GPS issues out there. It’s another mystery for sure. anytime we’ve replace GPS in the past it fixed any issue. I have spares if you want to try another one. Sounds like an intermittently connected wire somewhere
Click to expand...

Sure, might as well try a replacement GPS antenna. Nothing obviously wrong with the one I have, and it's mounted on a low-vibration part of the bike anyway (near top case), but I don't know what else to try.

We did a 3+ hour ride yesterday with a couple of stops. GPS logging was intermittent, and I saw something I haven't seen before.

At one point in our return trip, the GPS track diverged from our actual route and remained about 320 m east of our route, for the next few minutes.

Then the GPS track froze - indicating possibly that GPS logging stopped for the rest of that clip (about 30 seconds).

Start of next clip picks up GPS logging, showing our route accurately, about 1.6 km later.

There were more dropouts on the way home.

So, GPS logging is pretty much random. But, I hadn't noticed the position being so far off before (~300 m). Usually even a 100 m difference between true and calculated positions would be quite a lot.
OP
D

BTW, I've been able to reproduce the problems with the power module, off the bike.

That is, I hooked up my K2 with the power "cube," not connected to anything on the bike (old set of cameras) but no GPS antenna (since that's on the bike). Cube was drawing power from a 12V wall wart type supply, which gives about 12.25V with the K2 powered up.

I hooked this combination up in my garage and it ran fine for about 3 hours.

Then I put the power cube on a blanket and pointed a hair dryer at it, to simulate "it's a VERY hot day and power cube is under the seat" conditions.

The cu be shut off power to the DVR in under 2 minutes. Blue LED stayed on, as I've seen on the bike.

I suppose this proves that there is not anything on my bike that was causing the DVR shutdowns.

Did an outdoors test. Setup was:

-no GPS antenna (only have one, and it's on the bike)

-special v0.71 firmware provided by Innovv. This firmware writes a system log to storage as the DVR runs. The idea is to capture any error conditions correlated with the sudden DVR shutdowns.

All 4 video clips (2 front/rear pairs) were corrupted, since the shutdowns were non-graceful.

Doesn't take much heat to make the power converter malfunction, apparently. The DVR will happily run all day in 100°F+ temperatures and direct sunlight with USB power, but the 12V power converter can't handle the heat at all.

I preserved the log files but not sure how to read them.

Note that one of the logs reflects a graceful shutdown (by holding down silver button) under USB power. I briefly had the system on USB power indoors, since it kept getting shut off when I tried to use the 12V converter.
Last edited: Jul 19, 2020

I private messaged you the INNOVV factory Dropbox link to upload. Only the deva have access to the Novatek SDK to read the logs etc. logs were not meant to be posted public.
OP
D

I wouldn't say I am overjoyed to confirm the malfunction, but it is definitely interesting to see it happen even with the bike removed from the setup.

I believe we can safely discard ideas such as EMI, unobservable charging system irregularities, bike gremlins, etc. to explain the shutoffs.
S

Your perseverance seems to have found the culprit

Seems so. Curious that I'm the only one whose power cubes have all done this, as far as I can confirm.
OP
D

I got an all-new K2 system direct from Innovv last Tuesday. Yay!

Some changes have been made.

Innovv state that they have revised the power converter PCB design. You can tell if you have the "new" new converter because the label orientation is flipped, as well as the red, black, and yellow wires being "stacked" (vertical orientation, if the converter is lying flat) vs. along the long edge of the converter on the older version.

They added U-terminals ("claw" type) to the red and black wires of the power converter. Makes installation much easier, because you can slip the "claw" onto your battery post from the side. I only had to provide a terminal for the yellow "accessory" wire, so I crimped on a ring terminal.

Innovv are now including additional mounting hardware for the cameras. There are a couple of metal plates, with matching 3M adhesive patches. Not really sure how you're supposed to use them, but they look like this: 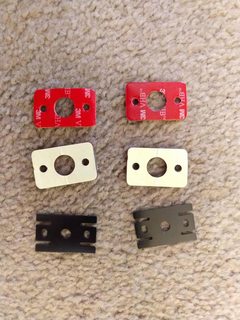 The L-brackets for the cameras are different. They are now made of thicker metal.

Best news: I did some off-bike testing of the new power converter, and it seems to not have a problem with heat. Promising!

I finished installing the system on my bike yesterday. Owing to mechanical problems, I have been unable to ride for the last 2 weeks. Supposed to get parts tomorrow, so I can fix it & go riding.
Last edited: Aug 3, 2020
You must log in or register to reply here.
Share:
Facebook Reddit Pinterest Tumblr WhatsApp Email Share Link
Top