Dashcam Viewer for Mac and Windows

Thanks for the input.

I exported the GPS data from a bunch of files en masse, into one .GPX and viewed it in GPS TrackMaker. About 8000 points total, from a few short rides around town.

Looked fine, but I suspected the points had been processed/corrected by Dashcam Viewer rather than being raw data. Do I have that right?

I only had the patience to upload one video file. Took almost 2 hours, sheesh:

Dropbox is a free service that lets you bring your photos, docs, and videos anywhere and share them easily. Never email yourself a file again!

In what programming language is Dashcam Viewer written?

I'm guessing C++ but thought I'd ask. I've been teaching myself Python and plan to add C++ to my arsenal at some point.
OP

I highly recommend Python as a first language. The language itself is very simple and intuitive and the number of available libraries is enormous. C and C++ are less intuitive (and much lower-level), but are required for ultimate execution speed.
D

Thanks. I did some research and decided to start with Python 2. Will move on to Python 3 after that and then maybe try C++.

Any recommendations on how to go about C++ once I'm ready? For now, I'm working through Zed Shaw's "Learn Python 2 the Hard Way."

I'm not 100% new to programming. Started with BASIC a really long time ago, some Turbo Pascal in high school, and some FORTRAN 90 in college. Picked up some Matlab scripting in grad school, but that's not "real" programming.
OP

Oops, just saw your post @DesertBike. Don't want to take this thread off-topic so I will respond to you via PM.
D

I was playing with DV's "merge multiple clips into one .mov file" feature. I got a .mov file (expected) and an accompanying .gpx file (not expected!). When I load and play the .mov, DV automagically picks up the .gpx file & displays position on the map as I play the video.

However, the movie and map position are out of sync by around 15 seconds. GPS position lags behind video view.

Looking at the .gpx file in Notepad++, the "Track Start Time" is within a couple of seconds of the onscreen clock in the video. So I'm not sure where the mis-sync occurs in the merging process.

To be clear: the video clips that I merged seem to be fine themselves. When I view them in DV without merging, moving-map position tracks well with video.
OP

Hmm...Hard to diagnose the problem without the original set of files, but the issue could be that one of the videos has an incorrect GPS time code. Try reducing the set of files and see if the problem persists. If you can duplicate the problem with a small set of videos (say 2), you can send them to me and I'll take a look.
D

Suspect it is dad GPS bata vs a bug in DV. I'll try merging some more clips from a different dashcam and see what happens.
D

More riding and more video taken yesterday. Saw the same problem described above, when merging all clips into one big movie.

I tried merging just a couple of clips from the middle of the trip, to see whether I could reproduce the problem. Resulting .mov and moving map were properly synchronized. Interesting.

It's as if the problem has specifically to do with the first clip or two in the series.

I will work on making some clips available that exhibit the problem I've described.
D

I've narrowed the problem down to being something about the one dashcam (Innovv K2).

I merged a session of video from my Viofo A129, recorded yesterday. The resulting .mov file and *.gpx track played in perfect synchronization.

I merged a different day's videos from the Innovv K2. Perfect sync on this one too. The non-synced merge the other day must have been an anomaly. It was notable because it was the first time I'd tried the "merge" feature, but clearly lack-of-sync isn't the usual outcome.

I do have a couple minor nitpicks/requests about the merging process however:

--The "merge" dialog states the output will be in .mp4 format, rather than .mov. Just a typo I'm sure.

--DV seems to insist on being "on top" of all other windows, and non-movable, during merge processing. Perhaps there is some way around this in Windows 10, but if so I do not know it.

No major gripes either way. DV has been amazing to use, and I find it very reasonably priced, given what you get.
OP

DesertBike said:
I do have a couple minor nitpicks/requests about the merging process however:

--The "merge" dialog states the output will be in .mp4 format, rather than .mov. Just a typo I'm sure.

--DV seems to insist on being "on top" of all other windows, and non-movable, during merge processing. Perhaps there is some way around this in Windows 10, but if so I do not know it.

No major gripes either way. DV has been amazing to use, and I find it very reasonably priced, given what you get.
Click to expand...

Thanks for the feedback, @DesertBike. Regarding the two issues, I couldn't find the message indicating that an MP4 would be created instead of a MOV. Can you send me a screenshot via email? On the second issue: the Merge window is 'modal' meaning it likes to stay up front of all other windows while it's processing. But you should still be able to work with other programs during the merge. If not, perhaps it is a Win10 issue. Not sure.
OP

Dashcam Viewer v3.4.2 was released today for both Mac and Windows with the following features and improvements. This is a free upgrade for all Dashcam Viewer users: 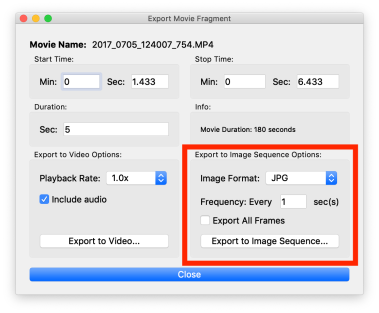 New Export to Image Sequence options​
General Improvements:
Bug Fixes:
The free version is fully-functional and allows the loading of up to 2 videos at a time.

Dashcam Viewer v3.4.3 was released today for both Mac and Windows with the following new camera supports and improvements: 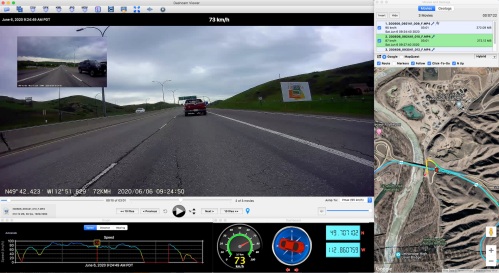 Dashcam Viewer displaying video and GPS data from BlueSkySea B1M 2-channel dashcam​
Bug Fixes:
The free version is fully-functional and allows the loading of up to 2 videos at a time. Give 'er a go!

We released Dashcam Viewer v3.5.0 for both Mac and Windows today with the following new features, camera supports, and improvements: 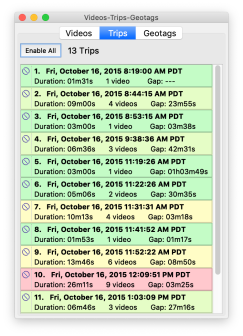 New Trip List​
New Camera Supports:
Bug Fixes:
The free version of Dashcam Viewer is fully-functional and allows the loading of up to 2 videos at a time. Take her for a test drive. ;-)

traveler said:
Trip List. When videos are first loaded, Dashcam Viewer now bins them into “trips” and lists them in a new Control Center window tab. By default, a trip is defined as a contiguous set of 1 or more videos with no breaks of greater than 1 minute. Videos constituting a trip can be shown/hidden.
Click to expand...

Nice feature. Been waiting for this.
V

Velvetfoot said:
Is there still a 100 file limit on the PRO?
Click to expand...

No, both the Standard and PRO versions load up to 1200 files. Here is table showing the differences between versions.
OP

A number of Viofo A129 Pro Duo have informed me that after updating their firmware to version "A129Pro: V2.0 Build: 20200710" Dashcam Viewer no longer recognize the 2nd channel. This was due to a video file-naming change by the firmware.

Version 3.5.1 is a 'hot fix' to make Dashcam Viewer recognize the file-naming conventions of new and old A129 Pro Duo firmware. No other changes were made to the s/w so if you don't own this model, then no need to update.

I notice that when I start Dashcamvier with no files chosen, graph choices such as G-force and altitude appear. However, when I load the files from my Viofo A119v3, these choices disappear. Is this because Viofo doesn't supply this info, or DCV isn't interpreting it?
Thanks.