Dashcam Viewer for Mac and Windows

No i think it can display any numbers of channels you want in X number of windows or PIP, but i just use one window with one feed and in general just use the footage from the front camera to find a thing i have not locked by the event button.
But if / when DV play a file it then proceed to the next file ( the rear footage ) which i then have to skip as i dont want to see rear footage to get to the next segment from the front camera.

So if there was a option to put a tag somewhere to just play the footage from one of the cameras i would be happy.
I am also running into the same problem with the regular media player i use ( pot player ) even if i have just selected 1 file i want to see it also "load" all the subsequent ones and skip automatic to the next one, and that is then a rear camera file which i have no interest in.
And with pot player i dont get it assume when i load 1 file i want to play, then it just assume i want to see every other video in that directory, and most often i just want to watch that 1 file.

Of course if i dove into the settings of pot player i might be able to change that, i am just baffled it is the default, though i recognize most other people probably want to watch other files.

But as i said i have DV but dont really use it as i have on interest in seeing on a map where i am driving, i can see that just fine on the actual video feed, but of course if i lived in a bigger place or got to drive to new places more often i would maybe want the map, but as it is, it is only one or two days a year i drive on roads i have never been on before.

It is probably not a problem for other people, but it annoy me.
Ant it could also very well be that if i dove into the settings / options of DV i could get it to perform to my liking.
It is the same working on the computer, i can and often have several taps open on my one screen, but i only deal with one of them at the time, if i was to try minimized windows and say have this forum going in one window, while i was doing other stuff in another window it would frustrate me.
And thats just this forum + a similar thing where you dont have much action going on, if i was to do like streamers do play a game + run a chat + run a stream of your self playing + what not,,,,, i would go insane, i get aggravated just watching other people doing that.

Maybe what i an requesting are a "light" mode, possible working just like a regular media player, and then you could add things like map / second feed / PIP if you wanted to, and as i would like to see the software ignoring other files if you are just in 1 window mode and just want to see front camera footage.

DV feel very massive to me, but i have another player much more simple and it is not like i use it instead.

I think there is a clear and present danger that if i was to get a 360 degree action camera, it would freak the hell out of me, cuz 360 degree footage or not it is just 1 flat image i would be interested in, its just with a camera like that you dont really have to aim it.
D

I see, wouldn't have thought to do that so haven't seen the behavior you describe.

I have the same problem with alternating front/rear views if I load a bunch of clips into e.g. VLC Media Player manually. Usually I "solve" it by manually segregating the front and rear camera clips, e.g., one folder for front views, another for rears.

DV is "smart" enough to distinguish between front and rear videos, so presumably there could be a checkbox to only display one or the other.
A

As I understand it, all the features are available in the free version; the big difference is that 'free' can only work with two files per session. I'm poor and cheap, but I'm soon going to put my money down here because this guy and his program deserves our support. Nobody else has put this much effort into getting us what we want since Vadim Kozlov and Registrator Viewer (RIP Vadim). And nobody else gives you all the features for free

Put your money towards a SG camera Phil, this come with the bundle.
Though of course, then it only work with SG cameras i assume, i have actually not tested this.
S

The SG version works only for SG cams, but it's a nice feature to get with their cams

Dashcam Viewer v3.6.0 was released today for both Mac and Windows with the following new features, camera supports, and bug fixes. This is a free upgrade for registered Dashcam Viewer users: 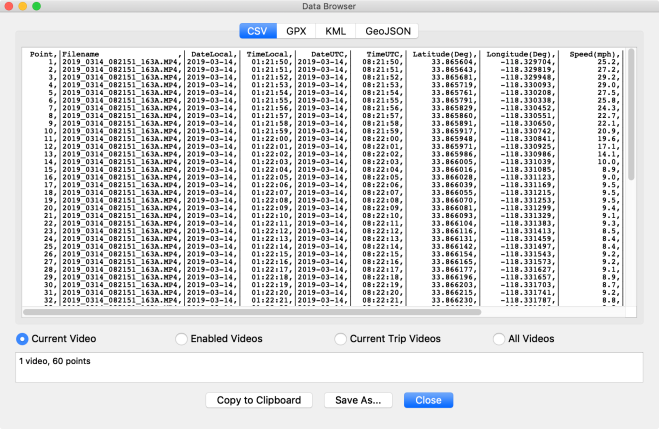 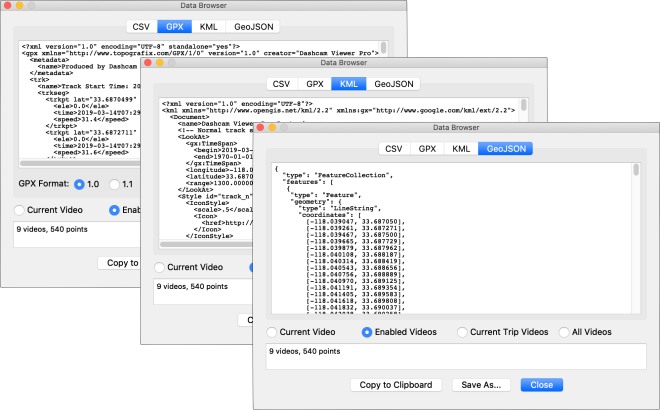